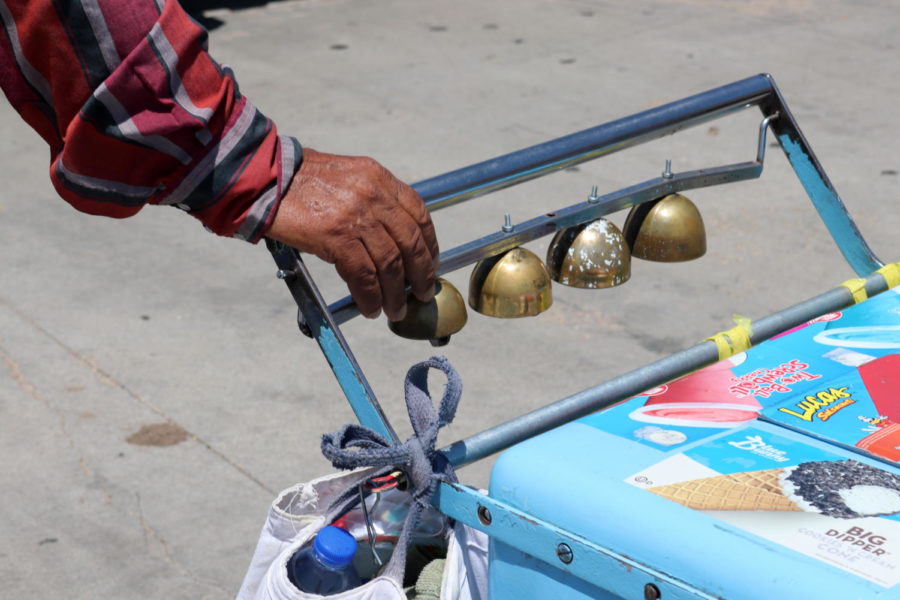 A paletero's hands are never far from the bells that call out to customers. Liberal has a long tradition with selling Mexican ice cream from a push cart, just like in Mexico.

They stop at parks, walk residential streets and business districts. Their presence is announced with a quick jingle of bells dangling from the cart’s handlebar. It doesn’t take much for veteran paletero, Francisco Solis, to get kids of all ages to run out to see what is in his cart.

On this summer day, Solis stops at a local tire shop and the jingling bells work like magic — three smiling kids run at full speed to greet the old paletero.

“What can I get you?” Solis says, smiling back at the kids’ excitement.

A young boy licks his lips and points to a picture of a lime-flavored bar pasted on the cart. “That one!” He claps his hands, excitedly grabs the popsicle and then dashes inside, leaving his father with the bill.

The father smiles, remembering a time when he was the kid dashing off with the cold, sweet treat, leaving his own father behind to pay. Solis smiles at the father, remembering all of the times he bought this summer tradition for his own daughters back in Mexico.

Paleteros selling paleta — Mexican ice cream and sherbet bars — have been a staple in Liberal for years but their journey began across the border in the small town of Tucambo, Mexico. The 1940s was a time of economic prosperity in Mexico and because of this, ice cream bars made with fresh milk and fresh fruit found their way into the Mexico City market. The ice pops eventually migrated to the United States.

It’s no surprise that these sweet treats landed in Southwest Kansas. The 2010 census lists four towns — Liberal, Dodge City, Ulysses and Garden City — as having the largest Hispanic populations in the state of Kansas. Liberal is a “majority-minority” town, meaning that more than 60 percent of the population is Hispanic. This influence is evident in everything … right down to the selling of paleta.

Catalina Hernandez and her husband, Apolinar, opened the “Polar Paleteria” four years ago on the south side of Liberal. The small paleta shop sits among a strip of old stores that have seen better days. It’s easy to spot with the bright blue paint. Walk inside and you enter an ice cream world: The bells chime with the slightest push of the door. Images of frozen treats are plastered everywhere. Freezers are squeezed along the walls, surrounding the small desk in the middle of the shop.

The storefront is mainly a place to store the frozen treats. The majority of the selling is done by the paletero. Maria began with 15 paleteros, but now, only three remain. She explains that paleteros have come and gone due to the physical endurance that the job requires — long gruesome days of walking 15 miles in 90+ degree heat. Solis is one of the three paleteros who remain. He may be retired but he strives to stay busy and work.