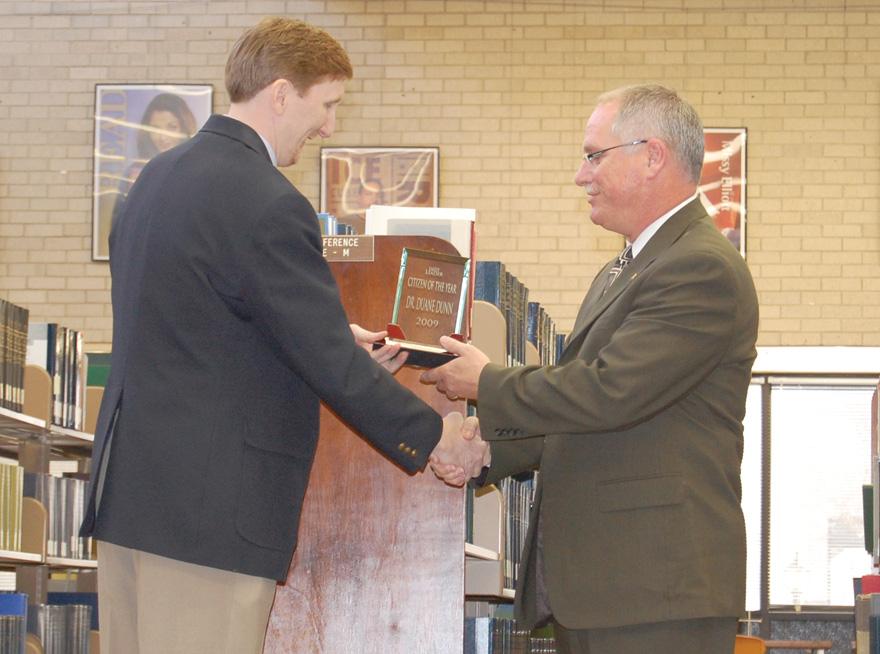 Crusader photo/ Rustin Watt Dr. Dunn shakes hands with Earl Watt as Dunn receives the High Plains Daily Leader “Citizen of the Year” award. Dunn won the award because of his work with the merger and many other community activities.

Seward County Community College/ Area Technical School President, Dr. Duane Dunn was recently honored as the High Plains Daily Leader Citizen of the Year for 2009. A reception honoring Dunn was held on Thursday in the Library. Dunn was very surprised by the honor. “It’s a great honor, but quite a surprise,” Dunn said. “I would have never guessed that was going to happen.” Dunn has been a citizen of Liberal for four years. During his time in Liberal, he has been involved with many things in the community, including being a member of the Chamber board, the Joint Economical Development Council, Rotary, Big Brothers/ Big Sisters and a local church. Dunn won the award because of his work with the merger of Seward County Community College and the Southwest Technical School. While Dunn was working on the merger, he felt that it was something that was best for the Liberal community. “I really think the merger was the best situation for the community,” Dunn said. “To give the best opportunity to…the students it made sense for the two institutions to be under one structure.” Dunn was chosen by a group of past Citizen of the Year recipients, including Bob Carlisle, Jay Hay and Al Shank. The award is given by the High Plains Daily Leader, although they do not help choose the recipient. Leader publisher, Earl Watt, described the Citizen of the Year as someone who plays an import role in the community but also does something above and beyond during the year. Watt believes that the merger is the biggest thing that happened during the year. He thought that Dunn was very deserving of the award after his work on the merger of the college and the technical school. “He kept people focused on what was right for the technical school,” Watt said. The recognition of Dunn as Citizen of the Year puts him into a group of diverse people. He will now get to help choose who will follow him.