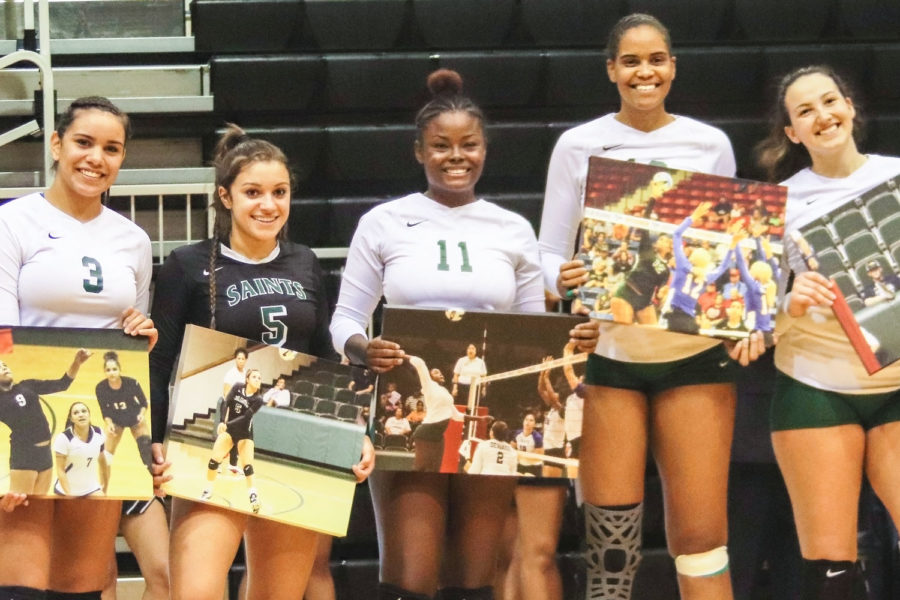 Sophomore Night started off with a stellar performance by the Lady Saints, leading by only two during the first 10 points before going on a 19-4 run. Independence called a timeout hoping to shake the Lady Saints, but a timeout could not stop the team’s momentum. The first set ended in favor of SCCC, 25-8.

Throughout the second set, the Lady Saints worked together by talking to each other and helping each other on the court. Independence began the set serving, but the ball was quickly back in Seward’s hands after a kill by freshman outside hitter, Djuly Schmorantz.

Multiple Lady Pirate errors led them to fall into a seven-point deficit. Independence then cut the lead to just three points. The Lady Saints recovered their momentum, winning 16 of the last 19 points. The second set ended with an outstanding score of 25-9.

The third set was one of struggle for the Lady Saints that they kept up during the whole game.

The Lady Saints had difficulties hitting throughout the set, and allowed the Lady Pirates to match them at 12 points.

Seward regathered and went on a 3-0 run, before extending the lead to six points. SCCC continued capitalizing on Lady Pirate errors, ending the third set with a score of 25-17, winning of all three sets and capturing the Jayhawk West title.

The Lady Saints will travel to Colby Community College and will match up against the Lady Trojans as they look to win the Jayhawk Conference outright on Wednesday, beginning at 6:30 p.m. in Colby.