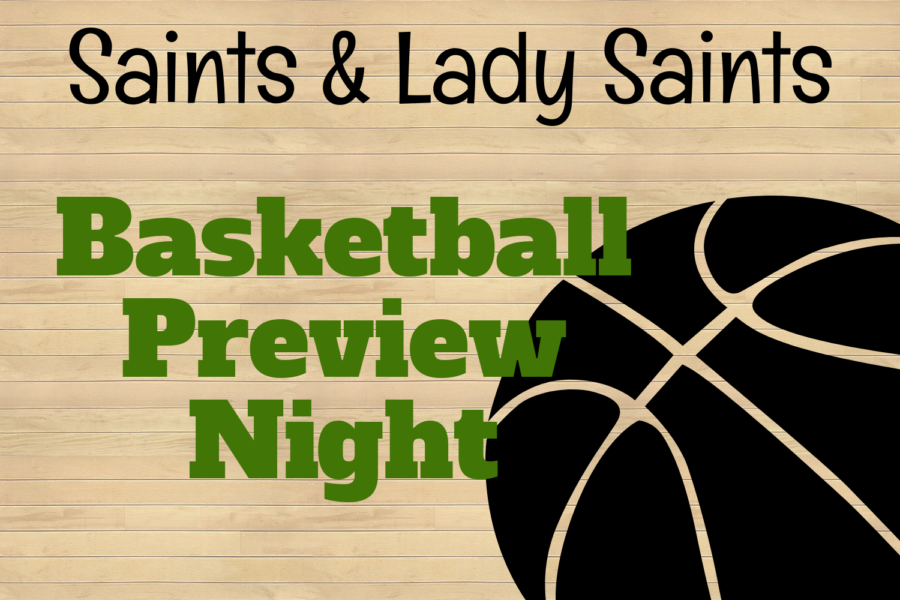 The Saints and Lady Saints basketball teams held their Preview Night in the Greenhouse on Wednesday. There were many fun events for the players and audience members throughout the night.

On Wednesday, Saints, Lady Saints and their fans gathered in the Greenhouse to celebrate the annual Saints/Lady Saints Basketball Preview Night. The night was filled with entertainment by both the men’s and women’s basketball team, the cheerleaders and members of the audience. The night consisted of a dunking contest, a scrimmage, a three-point contest, musical chairs, layups, a free throw contest, relays, a performance by the cheer team and much more fun.

The night officially kicked off at 5:30 p.m. when both the Saints and Lady Saints gathered for an autograph signing. Fans were able to come out and get the autographs of their favorite Saint athletes.

After the autograph signing, the fun officially began. The Greenhouse was packed as people gathered from all over to celebrate the upcoming season for the basketball teams. The first event of the night was basketball musical chairs.

Six members of the audience stepped foot on the court to compete in a game of basketball musical chairs. The members had to walk around the chairs while dribbling a basketball.

When the music stopped, they were to run to the basket, make a basket, then run back to their seat. Each participant was awarded a Saints Preview Night shirt.

Next up was the Coaches Free Throw Contest. Men’s basketball coaches, Jason Sautter and James Barrett competed against women’s coaches, Austin Mefford and Lizzie Nessling. Each coach was given two minutes to make as many free throws as they could. After four minutes, the girls coaches finished with 32, giving the men the win with 34 made free throws.

After free throws was an obstacle course. Saints cheerleaders spread out to create an obstacle course for teams of Saint and Lady Saint basketball players. The teams were to run the court, down and back while dribbling the basketball and making a layup on both sides. Team two was the winner.

More fun was brought to the night when two teams of three members of the audience were taken to the court and stood in front of a basketball and a bat. The audience members were to spin around the baseball bat with their head down for 15 seconds and then dribble down to the other side of the court to make a basket. The team with the first two baskets would be the winner.

The next event was the three-point contest. Five Lady Saints (Lexi Hernandez, Kalen Green, Sidney Tinner, Ali Lucero, Karolina Szydlowska) went up against five Saints (Ramiro Santiago, Julian Santamaria, Reggie Miller, Hegel Augustin, Marco Morency) to compete in who could make the most three-pointers. The men went first, finishing with 15 threes, before the girls went and finished with only nine.

Next was the uniform relay. Three kids between the ages of six to 12 started at the baseline, ran to half court, put on a complete Saints uniform (including shoes), then run the other half and make a basket. The first child to do that was the winner.

The Saints were given one minute to perform two good dunks in each round. After the first round, the finalists were freshman, Brown and sophomore, Flowers.

Brown was up first, with two very impressive dunks. Flowers was up next, but struggled to finish at the rim, giving Brown the win of the Slam Dunk Contest.

“The dunking contest was my favorite part because one of the boys did a flip before he dunked. It was pretty awesome,” freshman undecided major, Caitlyn McIntyre said.

Then, as the lights dimmed in the Greenhouse, each player on both the men and women’s basketball team was introduced. Each player from each team threw a t shirt to a member of the crowd as their name was announced.

The players were individually showcased with a video that included poses and ball handling videos of each player on the new scoreboard. During the player intros, it was announced that it was the first time in 13 years with a new Lady Saints Head Coach.

When the players were done being announced, they headed to their benches to prepare for the scrimmages. At this time, the National Champion Men’s Tennis players, Sander Jans, Gabriel Nery and Nicolas Rousset were recognized. Jans and Nery claimed a National title in doubles play while Rousset was the first Saint to win a singles play National title.

The Saints will begin their season Friday, Nov. 2 against Northern Oklahoma College-Enid In the Greenhouse during the Pizza Hut Classic. The Lady Saints will play Western Nebraska Community College the same night. Games will begin at 6 p.m.

“It was nice to see the teams come out tonight. I am excited to see how they both do this season,” Bailee Winters, freshman general education major said.