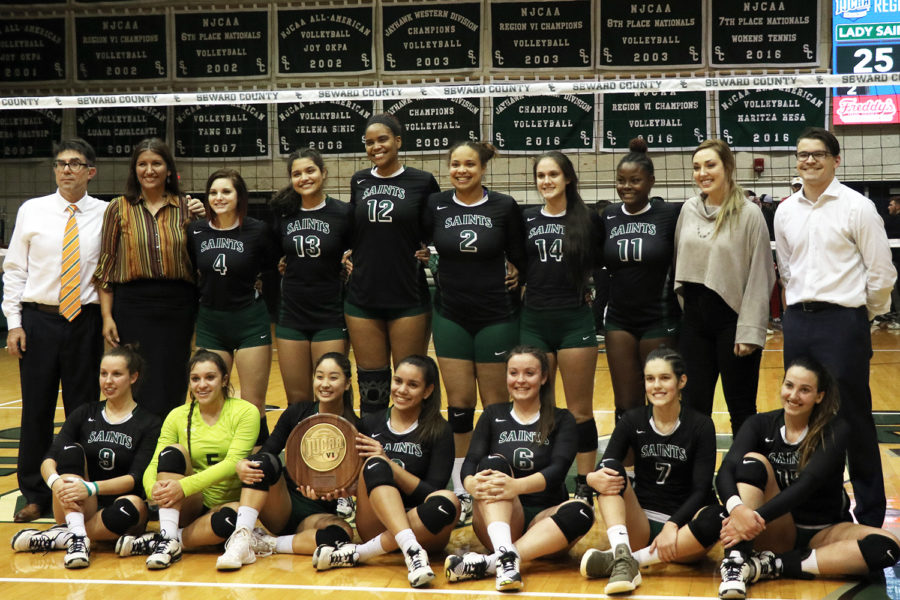 After defeating the Barton Cougars and the Hutchinson Blue Dragons, the Lady Saints claimed the Region VI Championship title. They will travel to Hutchinson to play in the NJCAA DI National Tournament from Nov. 15-17.

With the help of their rowdy student crowd, No. 6 Seward County Community College Volleyball  will advance to the NJCAA National Tournament for the second time in four years after defeating the Hutchinson Community College for the Region VI Championship title.

The Lady Saints started off the weekend with a close match against the Barton Community College Cougars. With the first set tied at 11, SCCC went on another run to increase their lead to three. The Lady Saints continued to battle with the Cougars and won the first set by a close score of 25-23.

The third set was filled with the energy of Lady Saints fans as they filled the gym. The Lady Saints started the set with an 11-6 lead and continued to grow it throughout the set, winning 25-14.

The Lady Saints’ momentum continued as they broke away from the Cougars with an 11-1 lead in the fourth set. The Cougars called a timeout in an attempt to regather, but remained no match as Seward County defeated the Cougars, 25-14 to advance to the Region VI Championship game.

After Seward County defeated Barton, it was time to go up against their rival,  the Hutchinson Blue Dragons in the Championship game.

As the game prepared to start, fans continued to fill the stands and ‘rocked’ the Greenhouse throughout the night.

The second started out with the Lady Blue Dragons lea

ding by two before Seward went on a 9-2 run to regain the lead. Seward increased their lead and was only one point away from winning the second set before Hutchinson won six straight points to trail by only three before the Lady Saints finally shut them down and won the set, 25-22.

The third set was another close set for the Saints and Blue Dragons as both teams tied at 5. Seward went on a 6-2 run to take the lead 12-7. HCC fought back and cut the lead to only two points, 15-13. SCCC increased their lead to four, before the Lady Blue Dragons went on a 5-1 run and stole the lead from Seward.

With the final set being so close, the Lady Saints fans took control and began cheering loudly for Seward.

With the help of the rowdy crowd, The Lady Saints were able to win the final set, 25-22 and were named the Region Vi Championships.

Seward will head to Hutchinson to compete  in the NJCAA DI National Tournament from Nov. 15 -17. Until then, they will wait to hear their seeding selection.