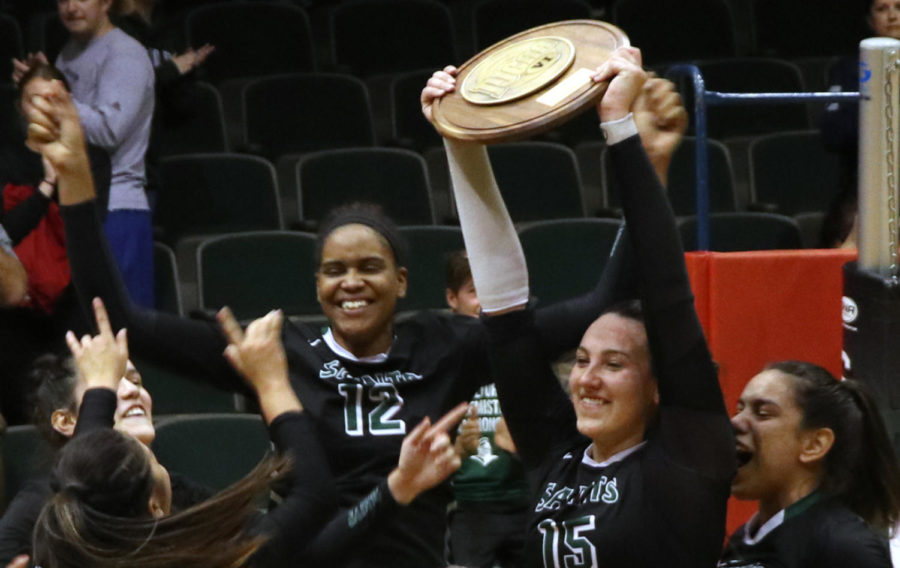 Six Lady Saints earned All-Conference awards, along with their Head Coach, Tony Trfonov who earne Coach of the Year in the Jayhawk Conference.

After defeating Hutchinson and winning the Region VI Championships, The Seward County Community College Lady Saints were awarded six different All-Conference titles for their hard work throughout the season.  The six awards ties last year’s team with the most in program history.

The first Lady Saint to earn a title was sophomore middle hitter, Luz Sierra. Sierra was named Most Valuable Player, along with First Team All-Conference. She is also ranked second in the nation and set the record for attack percentage at .499 this season. Sierra finished with 102 blocks as well.

The next Lady Saint to be recognized as First Team All-Conference was sophomore outside hitter, Giovanna Tapigliani. Tapigliani led Seward and the conference with 429 kills and 3.67 kills per set.

Joining Tapigliani and Sierra on the First Team All-Conference was freshman outside hitter, Djuly Schmorantz. Schmorantz finished second in the conference and on the team with 408 kills and 3.43 kills per set.

Freshman setter, Laura De Pra was named Second Team All-Conference after finishing second in the nation in assists and breaking multiple records throughout the season. De Pra led the league with 1,199 assists.

Additional Lady Saints that were recognized were sophomore liberal, Nathiellen Machado and sophomore outside hitter, Esmadar Tavares. Machado was named Honorable Mention after leading the team with 526 digs. She is currently sixth all-time in career digs with 986 total, the seventh most in a single-season. Tavares was also named All-Conference, finishing fourth on the team with 157 kills and 88 digs.

Along with the six titles earned by Lady Saints players was an award won by Head Coach, Tony Trifonov. Trifonov earned Coach of the Year after  Seward ties last year’s record with a total 16 conference wins in a season. . The Lady Saints played a total of 60 sets this season and won 57 of them. Trifonov’s award marks the third year in a row that a Seward County coach was Coach of the Year in the Jayhawk Conference.

The No. 6 Lady Saints will head to Hutchinson to compete against No. 11 Snow College in the NJCAA National Tournament on Nov. 15 at 9 a.m.