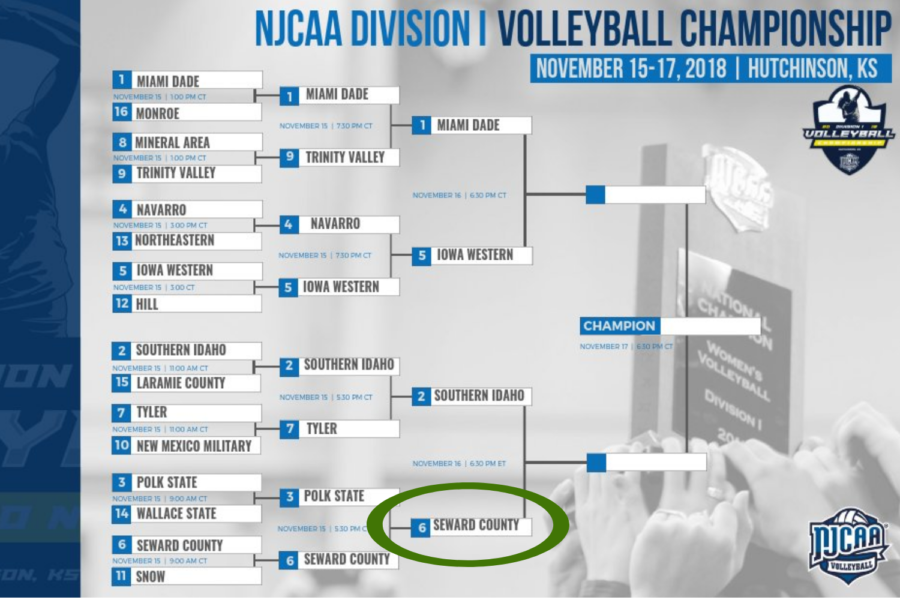 Seward County advances to the semifinals of the NJCAA National Tournament after defeating Snow College and Polk State College. Seward will play the College of Southern Idaho tonight at 6:30 p.m.

The No. 6 Lady Saints will advance to the semifinals in the NJCAA National tournament after defeating two tough opponents, Snow College and Polk State College.

To begin play at the National Tournament, Seward County Community College went up against no. 11 Snow College.

The Lady Saints started off full of energy, scoring the first eight points in the first set.  Seward shortly increased their lead to 10, 15-5. The first set showcased SCCC’s skills perfectly and they won the first set 25-10.

Seward started the second set with a 7-3 run to continue leading. Luckily for Snow, they were able to hold the Lady Saints from a double-digit lead. With SCCC leading by five, they went on a four-point run to increase their lead to nine by a 21-12 lead. Snow continued to battle but Seward went on another one and won 25-16.

Next, Seward competed against No. 3 Polk State College. The Lady Saints started off slow, falling behind 6-2 to start the first set. Seward finally regained their momentum, overcame the deficit and won the first set, 25-20.

In set two, the momentum was coming from Polk State. The teams battled, but Seward finally gained a 19-11 lead. Polk State then dominated with a 14-3 run to win the second set, 25-22 leaving the teams tied with one set each.

The Lady Saints and Polk State began the fourth set in an eight-point tie, but then Polk State went on a 9-0 run to take the lead. Seward battled and cut the lead to two, but they were unable to stop their opponent. Polk State won the third set, 25-21.

Both teams were now tied with 2 set wins, forcing the two teams to play a fifth set, the tie breaker.

Seward started the final set off correctly with a 8-5, but Polk State went on a run to tie the set at 11 points. Polk stated added another two points to take the lead. After a timeout, The Lady Saints tied the game at 14 points before back-to-back kills by freshman outside hitter, Djuly Schmorantz earned Seward the set win, 16-14 and the match, 3-2.

Three Lady Saints finished in double-digits in the battle against Polk. Schmorantz lead the team with 22 kills, sophomore right side, Giovanna Tapigliani added another 20 kills, while sophomore middle, Luz Sierra finished with 17.

Seward will now compete against the College of Southern Idaho in the NJCAA National Tournament semifinals tonight at 6:30 p.m.