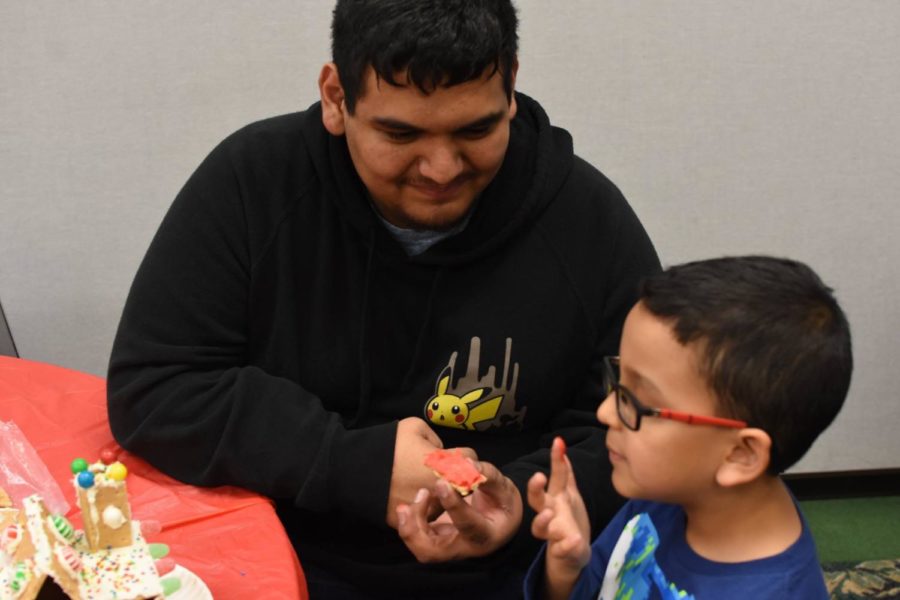 Danny Vasquez, Liberal drafting major, helps a grade schooler build a gingerbread house. Vasquez is part of the new club, Circle K International. The club is dedicated to community service and helping others.

There’s a new club on campus that goes by the name of Circle K international. This club is all about community service.

Even though the club just started halfway through the fall semester, the members have already volunteered for a few events in Liberal. The first one took place the Monday before Thanksgiving. CKI helped out at the Senior center for the annual thanksgiving dinner done for the senior citizens.

“I feel like CKI is a really genuine club. Everyone really cares about what they’re doing and we take everything we do seriously. Lizette [Avalos] is also really great at leading and organizing the club so that helps a lot especially during meetings.” Ana Herrera, behavioral science major, states.

CKI’s vision is “To be the leading global community-service organization on college and university campuses that enriches the world one member, one child and one community at a time” according to their website.

This club is a branch off of Kiwanis Club, which also funds Key Club at certain high schools. CKI is a college based club for students which gives them an opportunity to give back to the community through events and community service.

Herrera is the Vice President for CKI. David Perez is President of the club while Miguel Perez is the treasurer and Brian Martinez is the secretary of CKI.

The second event CKI has organized was a gingerbread house building fundraiser held for parents and their kids to get the chance to build their very own gingerbread house for the holidays. This was held on Dec. 4th.

“You only had to pay about $5 to get in and the kids got to make their own gingerbread house. This event was mainly a fundraiser for us, the club.” says Herrera.

They even had a donation drive in front of grocery stores in town on Dec. 6 asking shoppers to donate one canned good to them in order to donate these canned goods to organizations in need such as the Salvation Army and others.

To join CKI, all you need to do is show up to the meetings. Meetings are held in room SU 214 E/W Tuesdays at 5 p.m. For more information, you can contact Lizette Avalos.