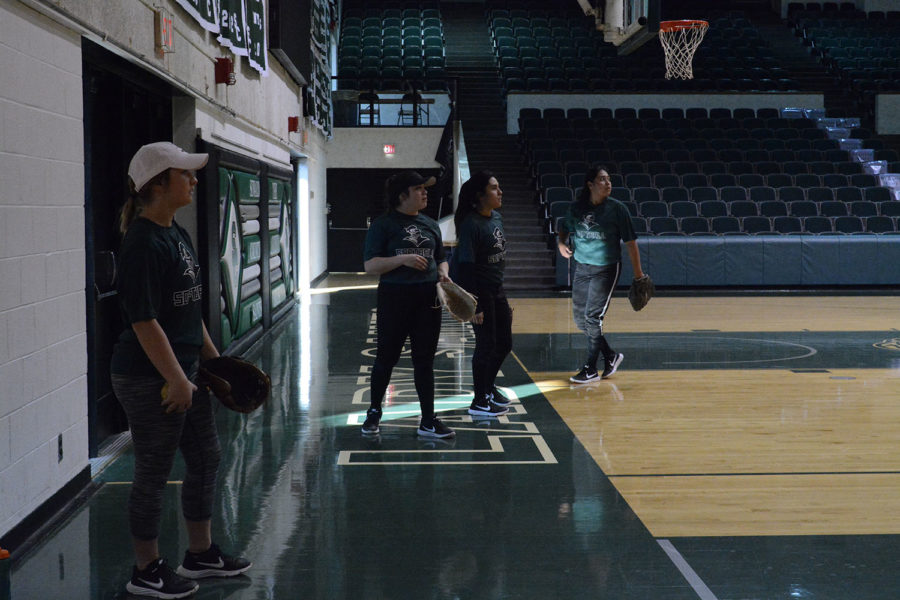 Softball team has practice before their opening weekend games.

The Lady Saints opened the 2019 season with a pair of losses against Northern Oklahoma Enid and North Central Texas College over the weekend.

The first game was against Northern Oklahoma, Enid, Oklahoma. Corrina Porras, right-hand pitcher from Colorado Springs, started in the circle for the Lady Saints, pitching four innings. She gave up three runs off four hits before  Alyssah Pontoja, pitcher from Amarillo, Texas, came in to relieve. Pontoja gave up two runs off three hits over three innings.

Northern Oklahoma jumped in front and scored three runs from a triple. The Lady Saints finally managed to close the gap in the bottom of the sixth. But it was too little, too late and the Lady Saints lost 6-4.

The second game of the weekend was against North Central Texas College from Gainesville, Texas.

Jordan Cordrey, right-hand pitcher from Colorado Springs, pitched 3.1 innings. She gave up nine runs off 13 hits. Nissy Lechuga, outfield from Arlington Texas, led Seward with two hits but Texas came in and scored at the top of the inning on a two out triple.

Texas managed to score six more runs in the second inning bringing the score to 7-0. Seward kept the game alive by coming back in the bottom fourth. Madeline Owen scored on a wild pitch before Jordan hit a line drive single to center field driving in Pontoja for the score and bringing the game to 9-2.

That was not enough as Texas scored four more runs ending the game at 14-2.

Catch the Lady Saints as they have their first home game playing Clarendon College at 1 p.m. at French Family Field.