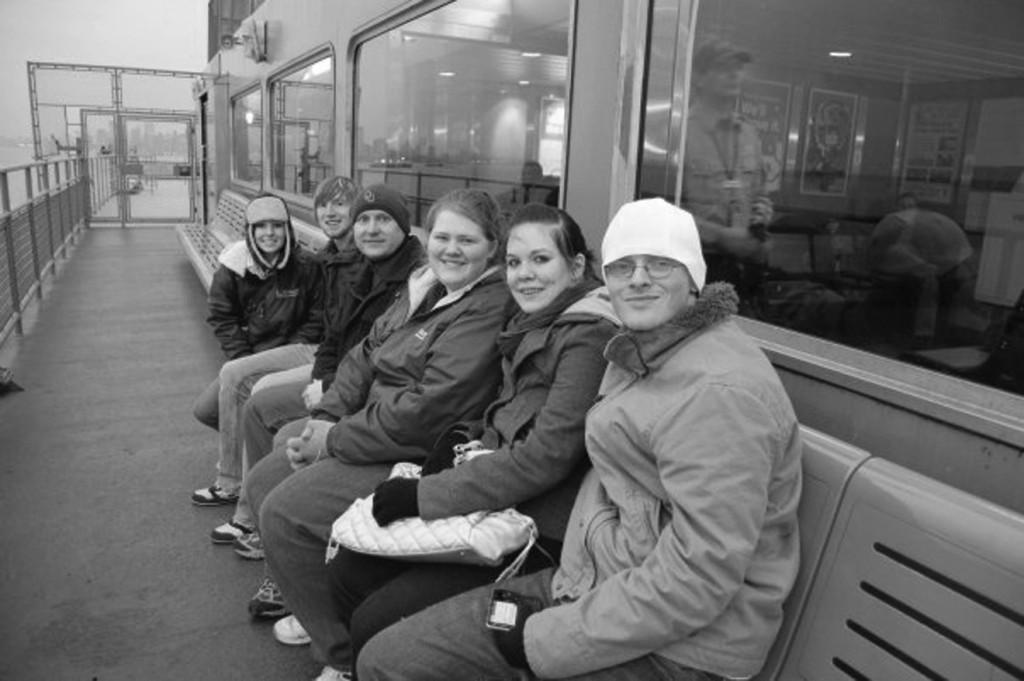 Crusader photo Crusader editors, Morgan Allaman, Rustin Watt, sponsor Daniel Hackett, Jessica Lulf, Chelsi Valdez and James McElvania stopped to pose for a picture on the Staten Island Ferry. The editors were in New York City for the College Media Advisors convention. While there, the group had a chance to visit many of the sites of New York and also got to hear Charles Gibson speak at the convention.

An ABC anchor, a lead CBS News reporter/ 60 Minutes correspondent and MediaStorm’s president addressed Crusader editors and others in attendance at the College Media Advisors spring convention in New York City during spring break. “Keynote speakers were really cool. I feel like I learned a lot from them,” Crusader editor Chelsi Valdez said. Each of these speakers addressed important topics in various areas of journalism. One of the most unique things for the editors was that Byron Pitts, CBS News reporter/ 60 Minutes correspondent provided everyone who attended his session his cell phone number and e-mail address. Helping student journalists is important to Pitts because of the help he received when he was in college. As a student, he struggled with English and was about to drop out of college when by chance he received one-on-one help from the head of the English department. Not only that, he had many other obstacles to overcome to get to where he is today. “I thought his story was really influential, especially since he went from speaking with a stutter to being a main correspondent on 60 Minutes,” news editor Morgan Allaman said. Converging media was a focus of the conference. Speakers encouraged students to keep up with the changing trends in technology. The presentation by Brian Storm, MediaStorm president, showed several examples of projects MediaStorm had done. MediaStorm is a company that puts together multimedia presentations that tell stories. “They are doing what media is eventually going to turn into compilation of multiple types of media. MediaStorm was really interesting because I think it would be neat to spend years of your life on one project, then use all that information in a 15 minute project,” Valdez said. Charles Gibson, ABC anchor concluded the conference strongly for the editors. “Despite his serious nature and the intimidating amount of respect that he commands, Charles Gibson was one of the funniest speakers I have ever heard,” online editor James McElvania said. “He is a great example of how successful one can become when they show true passion for what they do,” Gibson gave an outline of how he achieved his accomplishments. He made it very clear for those in attendance that the way that journalism has traditionally been presented is changing.The main reason for this is technology. It was not only the keynote speakers who gave the editors a idea of the things that can be accomplish with a career in journalism, but some of the sessions were inspirational as well. “It was a once in a lifetime experience. Meeting an ESPN sports writer and photographer gave me an idea of what it is like to be at that level,” sports editor Rustin Watt said. Even though the speakers were really strong, and some of the sessions were good, overall the editors liked the Kansas City fall convention classes better. “I do not think the spring classes were nearly as good as the fall ones, but the guest speakers were amazing. It is hard to get those types of people in places like Kansas City,” Allaman said. The editors said the location of the conference was an amazing experience. Not only were they in New York City, but the hotel was in the heart of Times Square. “Seeing the sights was a really good time, and being a New Yorker for a few days was fun,” Watt said.