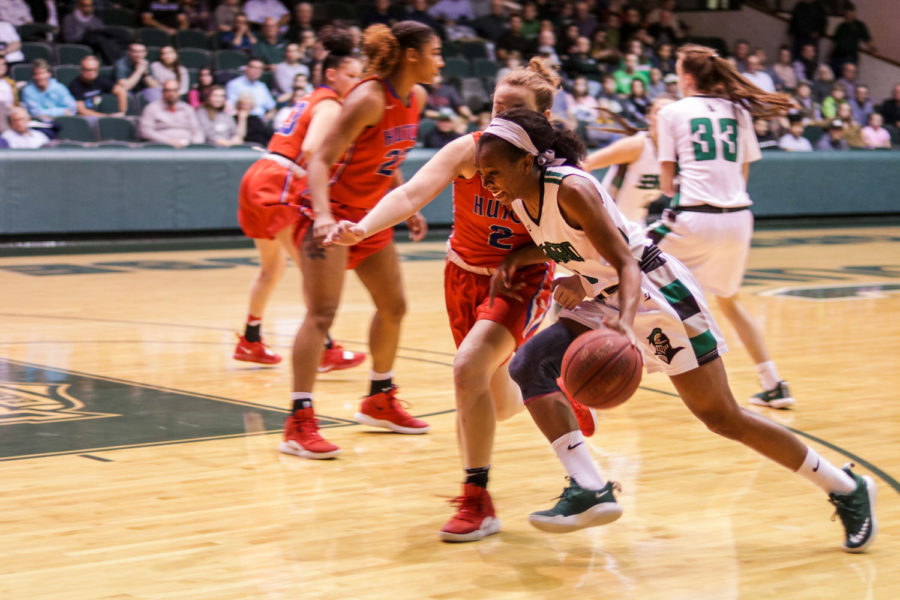 The Seward County Lady Saints dominated on Sunday afternoon, beating the Hutchinson Lady Dragons. They won a conference title and first-round bye in the Region VI tournament in Park City, Kansas on March 2 at 1 p.m. in the Hartman Arena.

The Lady Saints, who have won 22 games in a row, improved to 20-1 in conference play and 28-2 overall. This win marked 50 games in a row in the Greenhouse.

The No. 2 Lady Saints began the game with Aquila Mucubaquire, a guard from Maputo Mozambique, giving us a 2 point lead. The Lady Saints denied the Dragons and did not let them score taking an eight-point lead making the Lady Dragons call a time-out with five minutes left in the first quarter.

The Lady Saints gave up two three-pointers from Lady Dragons Makayla Vannett, a guard from St. Paul, Minnesota. Lexi Hernandez, a guard from Canyon, Texas, got the rebound and went for a three-pointer putting the Saints in a 19-12 lead.

Coach Mefford was frustrated with free-throws “We’ve struggled from the line in games. We start the season leading the conference in free throw shooting early, and then all of a sudden I don’t know where it’s went. There was a lid on the basket at the free-throw line for a little bit tonight.”

Starting the third quarter Hernandez blocked Vannett and denied her layup. The Lady Dragons trailed by two. Vannett made another three taking the lead for the Lady Dragons with a score of 37-41.

Vonda Cuamba, forward from Maputo, Mozambique, drove in and got fouled sending her to the free-throw line and tieing the game 45-45. Ending the third quarter, Hernandez stole the ball to find Mucubaquire for an open layup at the buzzer ending 51-49.

Dejanae Roebuck, a forward from Olathe, Kansas, for the Blue Dragon’s tied the game with a layup 58-58 with only four minutes left in the fourth quarter. With 26.7 seconds left to play Veloso found a way to drive in helping the Lady Saints tie the game 62-62. The Lady Dragons called a timeout to find a play to do against the Lady Saints to win the game but the time ran out and sent both teams into overtime.

The Lady Saints will play on Mar. 2 in Park City, at 1 p.m. in the Hartman Arena. They will play the winners of Cloud County and Dodge City.