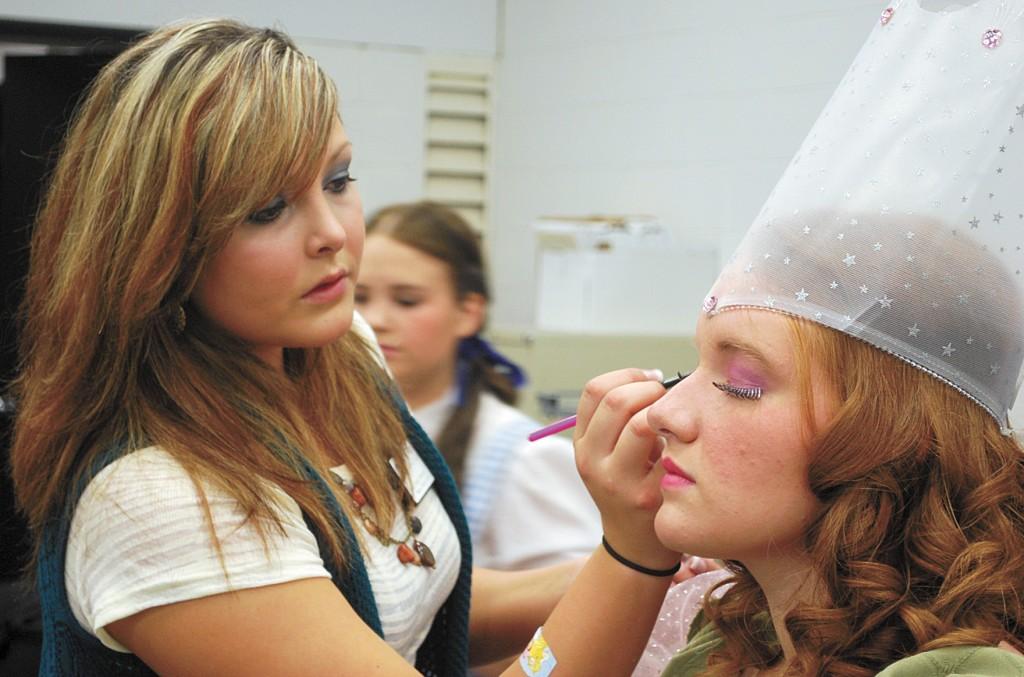 In high school, Jandi Riddle was busy playing basketball, golfing and cheering, but now, as a graduating cosmetology student she’s busy coping with the long hours and learning to step out of the comfort bubble her hometown of Turpin, Okla. had provided. “I’ve grown up in Turpin my whole life, so coming to college and meeting new people and making new friends was really different for me,” Riddle said. Turpin friends, like McKenna Keys, know a different side of Riddle, though. “Jandi’s friendly, outgoing, someone you can always have fun with and she has weird little quirks about her that most people probably wouldn’t understand unless they got to know her,” Keys said. “She’s just weird about stuff. She randomly says things like ‘I would be completely happy in a field full of flowers’.” They have, however, seen her cosmetologist potential. “She was always doing cool things with her hair,” Keys said. “She’d wake up one morning and do something completely different with her hair that she had never done before. She was always into that stuff, I think.” Jandi’s cosmetology skills include hair cutting and color, waxes, manicures and pedicures, facials and makeup application. Cosmetology instructor and coordinator Sheila Scheib is proud of Riddle’s accomplishments in the program. “Jandi is a great team leader and shows respect for all her classmates,” Scheib said. “She loves the cosmetology profession and to learn above and beyond the classroom.” After graduation from Seward, she’s been promised a job at Polished Salon located in the Landmark Center, but one day Riddle says she would like to own her own salon. “It’s kind of always been my plan,” Riddle said. “Since third grade I’ve known I wanted to do it.” In 10 years, I see her having her own hair salon with lots of clients,” Keys said. “And probably still trying to find a guy that she can hold on to.” While attending Seward, Jandi helped with hair and makeup on the sets of “The Wizard of Oz” and “Beauty and the Beast.” “I’ve really had a good time working on the plays,” Riddle said. “That was really an honor to get to help outside of the cosmetology program.” Riddle credits one person to her success. “My mom,” Riddle said. “She really pushed me to reach my goals.” Outside of her career-oriented life, Jandi enjoys golfing, facebooking and making use of her Blackberry Curve, but her friends believe taking care of other people is highest on her priority list. “She takes care of everyone,” Keys said. “They call her Momma Jandi because she has everything in her purse, and she’s always the one worried about people and watching out for everyone.” Her father, Brian Riddle, agrees Jandi is a caregiver. “She’s very honest and caring,” Brian said. “She cares about everybody and wants to be the mother hen.” Keys recalls several instances where Jandi has taken care of her. “Whenever I’d stay the night with her on a school night, in the morning she would bring breakfast up and sit it on the side of the table for when I woke up,” Keys said. “She just takes care of people–too much I think.” Jandi came to Keys’ rescue prom day after Key’s makeup artist’s appointments were running two hours late. “Jandi ran in with all her makeup and her big ol’ briefcase-looking thing, and she was worried about it and stressed out, but she did really good,” Keys said. Now, Riddle will have her own run-in with the real world. “I’m very proud of her and she’s grown up to be a very nice young woman and has taken care of her responsibilities,” Brian said.