Review: SCCC brings A Night in Paris to campus 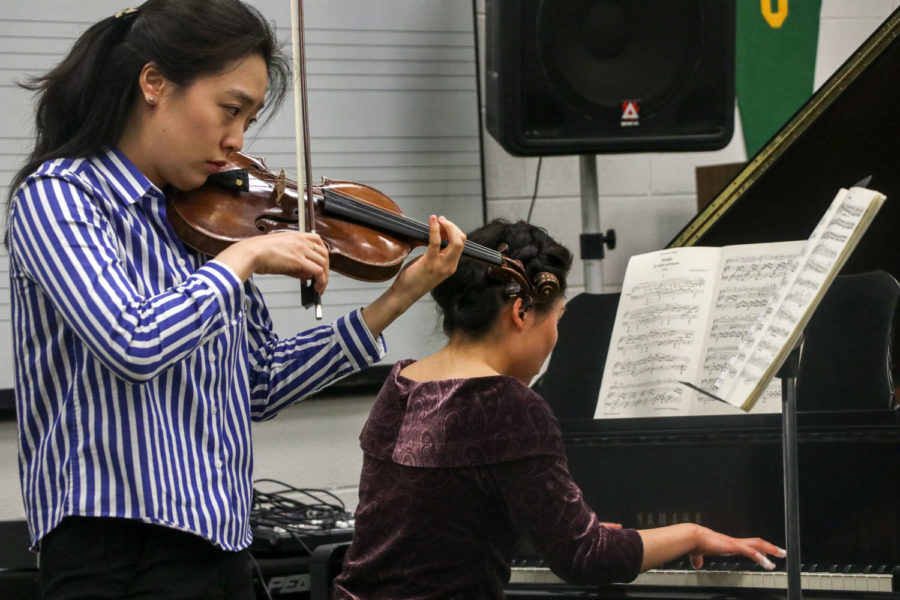 The Humanities department of Seward County Community College hosted Lucy Tan and Yunjung's first night of their tour, "A Night in Paris: Music for Violin and Piano" on March 18. The two gave a beautiful performance of three sonatas for violin and piano.

The beautiful melodies and chords of the piano and violin blended together wonderfully in the band room of the Shank Humanities building. If I had not been in the room, I would have thought it was a recording of a sonata playing on Youtube or some music player—but it wasn’t.

On March 18, the Seward County Community College Humanities Division hosted, “A Night in Paris: Music for Violin and Piano.” Violinist Yunjung Lee and pianist Lucy Tan played three Sonatas in the small intimate setting. It was beautiful and super impressive, to say the least.

Lee and Tan are on tour, visiting different parts of the state and country to expose themselves as artists. But their main goal, according to Tan, is to “expose a little bit more of string music” in the southwest Kansas area as well as some parts of Oklahoma.

“We don’t normally see a lot of string artists and pianists in this area so we have decided to do this tour to represent OPSU and Drake university. It’s good to get this type of exposure out in the southwest Kansas area so that people have a little bit of culture and knowledge on this type of music,” Tan said, while Lee agreed.

Chills and emotion are the two words that come to mind when I think of the three separate sonatas Lee and Tan played. It was everything you could expect from two professional  musicians. With each and every note … every string … and every key, these two played with no flaws and extreme passion.

Their expertise was definitely showcased. Lee and Tan worked together as a team, keeping time super well with chords that meshed beautifully.

The syncopation was done effortlessly, when playing Sonata for Violin and Piano, L. 148 Allegro vivo. They always played together on time, never one ahead of the other or behind.

The musicality of this duo is not something that can be accomplished in only a matter of a few months, unless you are a prodigy such as Louis Armstrong. It takes years to develop such a level of expertise on an instrument as complex as the violin or piano.

“When learning to play an instrument, it really depends on who you’re getting lessons from and how much you practice. If you practice a lot, you can definitely become skilled very fast but I think having a good teacher really influences your musicality,” Tan said.

“Finding time to practice with each other is really difficult,” Tan said, adding with a laugh, “especially because we live in different parts of the world but when we do, it goes really well.”

The two like to practice at least two to three hours a day on a regular basis.

“I’ve once practiced for seven hours in one day, with breaks of course,” Lee said, shocking all of us in the room.

Lee and Tan met while attending school in Rochester, New York at the Eastman School Of Music, one of the most professional schools of music on the East Coast. The two graduated from Eastman and are now teaching their own classes, Lee at Drake University and Tan just down the road at Oklahoma Panhandle State University.

Tan and Lee began to play music at the very young ages of 6 and 5.

“I remember going to a lot of shows and concerts with my mother and so she thought it would be a good idea for me to learn violin, more specifically because she thought music would help me with my social skills and education, so I did it and I never hated it once,” Lee said.

Lee and Tan effortless emphasized the dynamics in the music—increasing volume and speed, then slowing it down again to almost a whisper. They poured so much emotion and gave each song a specific nuance, each song had its own story and character.

The song I enjoyed the most was the last sonata, Sonata for Violin and Piano No. 1 in A Major, Op.13 Allegro quasi presto. Tan gave the runs of the scales justice and every note was played with passion and emotion. Lee followed along, doing the same runs on violin. It was a beautiful piece of work performed by master musicians.

The nuance of the duo was so powerful as they swayed and moved to the music. Lee hit notes on the violin that made you really wanna scream “YES!” because it was just that amazing.