Reclaim your childhood, enchant your adulthood 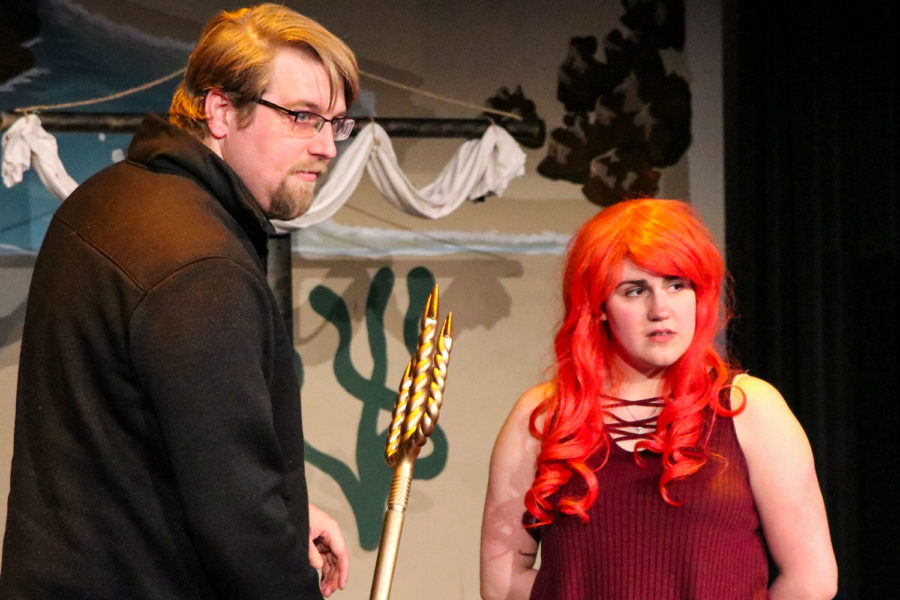 Seward County Community College will be bringing the animated adaptation of "The Little Mermaid" to the SCCC showcase theatre on April 5, 6 and 7. Community member, David Adams will be playing King Triton and SCCC bookstore Associate Madelyn Sander, will be playing Ariel.

Get on stage and experience a scene with SCCC’s theatre department with a 360 view. (rotate around the video to see all sides) Community members and students spent months practicing “The Little Mermaid.” The musical opens Friday at 7 p.m.

Everyone has seen the Disney adaptation of “The Little Mermaid,” a story of a girl who falls in love, wishes for legs and proceeds to go on land in search of an adventure. It’s a story we have all come to know and love that will be coming to the Seward County Community College showcase theatre.

The original children’s story was written by Hans Christian Anderson, who lived between 1805-1875. He is also known for writing “The Ugly Duckling” and “The Emperor’s New Clothes.”

Since the 1989 animated adaptation of “The Little Mermaid,” it has since been turned into a Broadway musical in 2008 and it started touring in 2012. It has turned international, as countries like Israel, Russia, Japan, and Brazil have taken part in showcasing this story.

For Sanders, this isn’t her first musical role, this past summer she played Mary Poppins. She has a degree in musical theatre and experience under her belt.

“It’s a big role to fill. Ariel is a young naive girl with a wonderful gift,” Sanders said. “I enjoy the fact that I get to connect with my childhood memories and there’s a light message in the end.”

For others, it’s a major step forward. Knudsen mentioned that this is her first big role in acting, especially singing wise.

“I have been singing this was little so singing comes naturally for me. I’m just not used to doing it with a microphone” Knudsen said.

Surprisingly, not everyone is as experienced as Sanders. Alvarez said this isn’t just his first leading role, this is his first experience taking part in a musical, ever.

“I have Van Hessen as my teacher. She talked about tryouts and I figured why not try out for the musical”  Alvarez said.

That didn’t mean things got easier for Alvarez.

“It was stressful as heck! It was my first time singing in front of people and it made me so nervous that I got chest pains” Alvarez explained.

First practice jitters and fear of singing in front of others is just part of the business. “Since it’s my first time singing I just have to remember to breathe and things will be fine,” Alvarez added.

Although this version isn’t quite as lighthearted as the Disney version, the same message still remains.

“The original story is nothing like the Disney version, it’s actually quite darker,” Van Hessen said. “It’s a story of a young girl leaving home and seeking an adventure, which is something we all know. There is something out there for everyone.”

The Showcase Theatre will be showcasing “The Little Mermaid” April 5 & 6 at 7 p.m. There will also be a matinee showing on April 7 at 3 p.m. SCCC students can get their tickets for free by showing their student ID. Children 10 years old and younger and anyone 65+ get in free. Tickets are $10.
Cast – rotate photo to get a 360 degree view