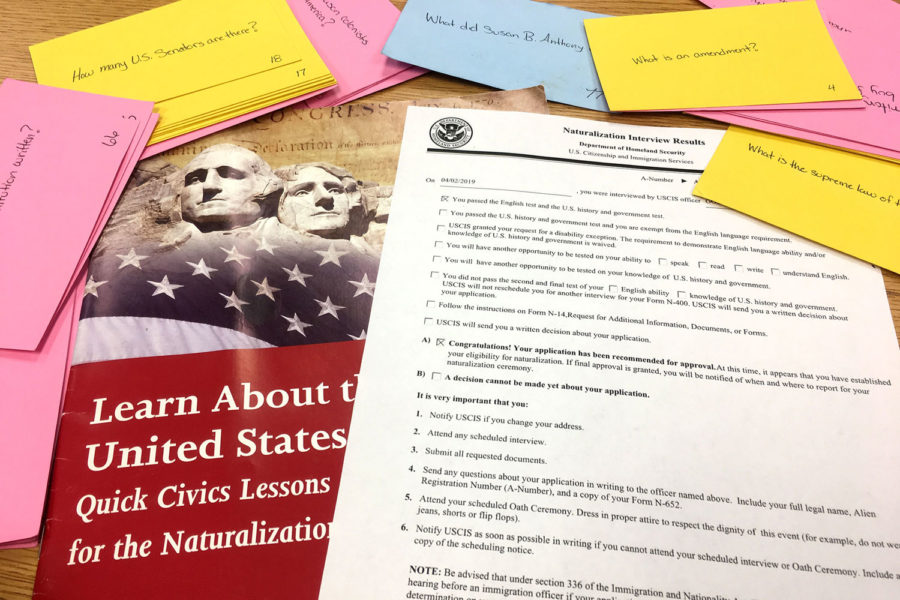 In order to become a U.S. Citizen, you must learn the answers to 100 questions. To pass the test, you have to get six questions correct in an oral exam.

Citizenship isn’t something that most United States inhabitants will ever have to worry about. For those that are born here, citizenship is automatic; for those that have migrated to the States from other countries, however, the process isn’t so simple.

Immigrants who are already residents and are pursuing official U.S. citizenship must undergo an extensive naturalization process that requires they complete a twenty page application, participate in a thorough interview with the United States Citizenship and Immigration Services and pass a test over U.S. civics.

Seward County Community College has held citizenship classes in an effort to help community members prepare for each part of the procedure.

“In my citizenship class, students will learn how to navigate the application and prepare for their interview,” Janeth Vasquez, SCCC transfer coordinator and citizenship class instructor, said. “Basically, this class will help prepare residents for their test.”

Araceli Ramirez, a student from last year’s class who recently passed her citizenship test, said that hearing about the class over social media gave her the push she needed to pursue official U.S. citizenship.

“I heard about the class from a friend. At the time, I only had my green card,” Ramirez said. “I felt like I was in limbo and I knew that I wanted to do the right thing and become a citizen.”

After enrolling in the class and becoming familiar with the material, Ramirez experienced a “remarkable boost” in her self-confidence.

“I started learning all about US history, geography, civics and law,” Ramirez said. “We practiced the questions over and over again until I was finally confident in myself, and being more confident made the whole process much easier.”

Yesenia Nieves, another student from a previous class, experienced a similar situation.

“I thought about doing it on my own, but I was too worried. When I heard about the class, I felt like I had the chance to get the help I needed even though I was scared,” Nieves said.

Nieves also explained that, after taking the class, she finally felt prepared enough to begin the naturalization process.

“I’ve already gone in for my biometrics,” Nieves said. “My test appointment is on April 4. I’m nervous, but I think that I’m ready for it now.”

Since many US residents will never have to take the test to earn their citizenship, knowledge of the process isn’t very widespread. Vasquez explained, though, that despite what people may think, obtaining citizenship can be very difficult for immigrants.

“To apply for the test, it costs $725. People who want to pass it have 100 civics questions they have to study and learn,” Vasquez said. “There’s also a reading and writing portion in English and exceptions are rarely made for non-English speakers. It isn’t easy.”

Vasquez shared her personal understanding of just how discouraging the naturalization process can be for immigrants who come to the U.S. seeking citizenship on their own.

“I’m an immigrant and so I know how hard it is to to reach that American Dream; it’s a long, expensive, emotional and difficult journey,” Vasquez said. “I’ve been there–the subject is very dear to me. That’s why I want to help these people.”

Another thing that is important to Vasquez, is the validation that her students feel as they come closer to their goal of establishing US citizenship.

“Every student is freaking out at first. Over time, their mentality changes, though. The class gives them the confidence that they need to feel accepted and understand that this is their country,” Vasquez said.

Nieves’ motivations for earning her citizenship were ultimately similar to the outcomes Vasquez had in mind for her students from the beginning.

“I think that becoming a citizen will make me feel like I belong,” Nieves said. “I want to be able to vote and participate, too.”

Even community members who haven’t enrolled in the class hope to attain citizenship for the same reason: belonging.

“I haven’t taken my test yet, but I’m starting the process because I really want to have a life here,” Maria Herrera, a sophomore engineering major from Liberal, said. “I don’t want to fear deportation. I want to be a part of this country.”

The class is available to all eligible legal permanent U.S. residents, and will be held starting Aug. 27 on Tuesdays from 6-8 p.m. Registration is currently open and costs $100.