Saints go 3-1 over the weekend 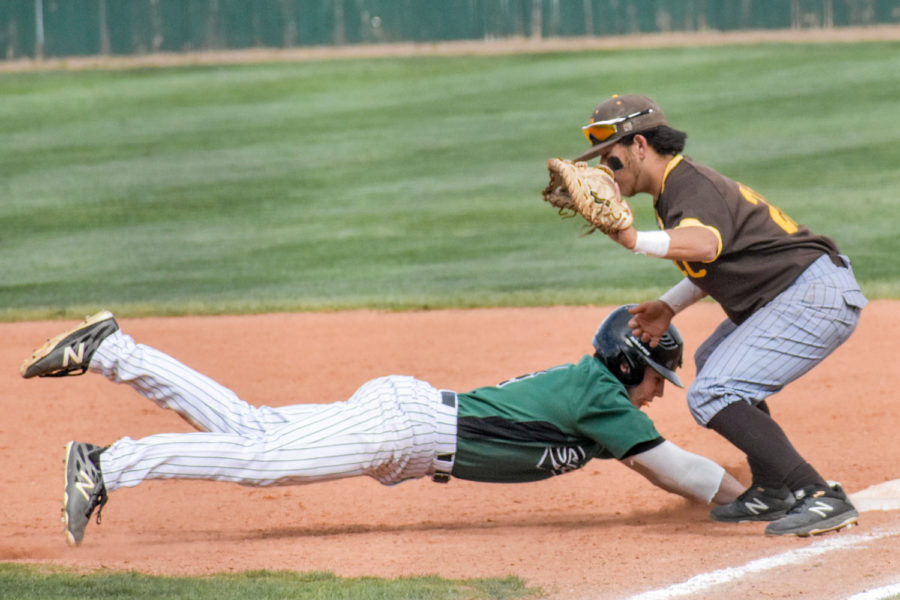 Zane Alexander, Del City, Oklahoma freshman, dives bad to first base. The outfielder is known for his speed and large leads off the bag, driving opposing pitchers crazy. Alexander added two hits towards the end of the game ensuring that Seward takes a doubleheader win.

On April 12, the Saints played a double header against the Broncbusters, winning one but losing the other. The Saints won the first one with a 1 point lead, 7-6. The second game ended in Garden City Community College’s victory with 9-10.

This tight game soon fell on Seward as they took the lead six runs in the later innings so they sweep with another win. An early four-run and inning was earned on an error by Braxton Allen from Mineral Wells, Texas. Cruz Shope from Fort Worth, Texas scored and single leading the game 4-0.

Seward took the next innings taking the lead once again 10-3. Ryan Thomas from Mansfield, Texas relieved Giberson at the start of the fifth inning. Thomas tossed a one-hit ball, struck out four and worked over five scoreless innings.

Zane Alexander drove the Garden City Community College pitcher crazy during one of his trips around the bases. See how he kept everyone on their toes in this photo series of Alexander running from first base. Click/touch photo to see full gallery and captions:

It started with a seventh run, fifth inning effort from Chandler Poell from McKinney, Texas who also took a run-win in the opener. This led Seward to take a four-run lead until the fifth inning.

Jose Caraballo from Guayama, Puerto Rico led a single and reached third base on an error and wild pitch. KP Werner from Greeley, Colorado and Cayde Ward from Fort Worth, Texas capped the scoring inning. Ward finished up with a to run-homer as the Saint’s had a 12-1 lead.

The kept a 4-0 lead with a pair of runs in the first two innings. Garden scored a run on the third inning, Seward ran on the fourth for a 5-1 advantage before a seven-run victory. Garden makes another run but in the end, they fall to the Saints 11-3.

Catch the Saints as they play Frank Phillips College at the SCCC field at 3 p.m. on April 16.