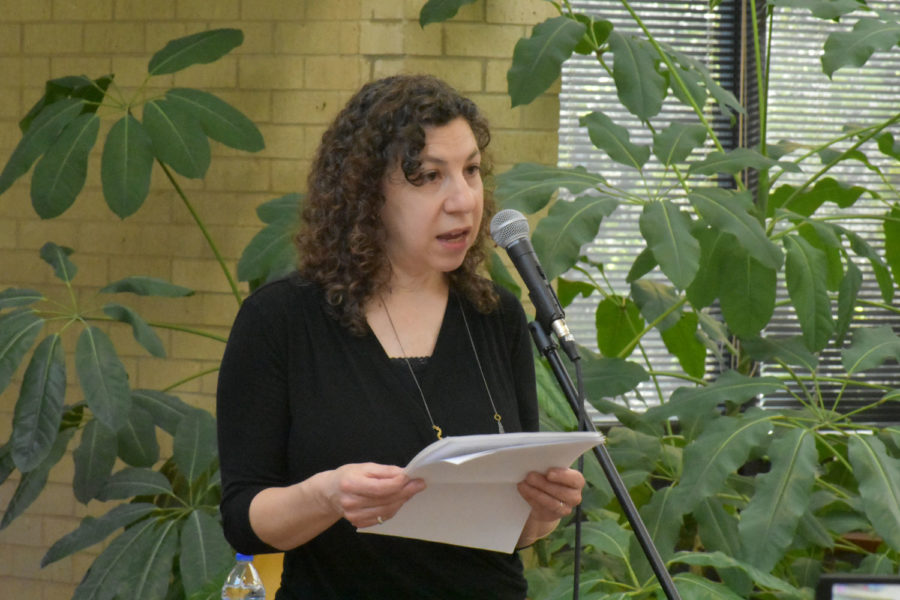 On April 12, Seward County Community College hosted its annual Poetry Coffeehouse in the student union. Rebecca Aronson was invited to read and judge the poems that were entered into the contest. During the day, a luncheon was held for Aronson to answer questions and read from her book, "Ghost Child of The Atlanta Bloom."

On Friday evening, an audience of fellow poetry lovers and peers sat amongst each other, ate horderves and sipped on water or lemonade in the Seward County Community College student union, to watch their beloved friends or family members read winning poetry pieces for the night.

On April 12, SCCC held its annual Poetry Coffeehouse in the Student Union. English Instructor, Janice Northerns holds one every year to bring the poetry and writing community together. Northerns also asks a published poet every year to read their own work at the readings and to help judge the entries. This year, award winning and published poet, Rebecca Aronson was invited to read and judge.

“I think it’s such a lovely event Janice hosted, it’s so nice to see so many people and groups coming together to read poetry. I loved the music and the food, it was so nice,” Aronson said.

Rebecca Aronson is from Albuquerque, New Mexico and has two published books out, “Ghost Child of The Atlanta Bloom” and “Creature, Creature.” Aronson judged entries for the Open and Scholarship categories, while Northerns and Bill McGlothing judged the Young Poets category.

Each winner was announced by Northerns and was asked to read their poems if they pleased. First place winner for the Open Category, Jose Rodriguez read his poem called “Packing Plant” which takes you along his journey and experiences at the packing plant in town, National Beef.

“Winning felt great, it was very unexpected! Every year Mrs. Northerns would always message me to enter poems and to do her creative writing class but I never did because I was busy with my career and this year it was convenient,” Rodriguez said. “I entered two poems I wrote in her class and one of them ended up winning which I didn’t expect.”

Reading poems in front of everyone is harder than it seems. Although he made it look easy, Rodriguez mentioned how it had been a while since he read a poem in front of anyone.

“It’s a really nerve-wracking thing, especially because people I admired were in the audience, like past teachers and just people I looked up to so it was hard but I’m really glad that I did it,” Rodriguez said.

Rodriguez also points out how Northerns has been a mentor to him since his sophomore year in high school and has always pushed him to continue writing.

“Honestly, if it wasn’t for her I probably wouldn’t have written anything or submitted my poems,” he added.

At the end of the event, Aronson read poems from Ghost Child of the Atlanta Bloom, two about dresses, “I wrote this one because I just really loved that dress actually, I promise not all my poems are about that,” Aronson jokes.

Aronson describes her book in three words as nature, nurture, and danger.

“It’s about parenting, relationships, the landscapes in New Mexico and the fire danger there and just personal danger,” Aronson said.

As a poet, Aronson says she began writing when she was just a child. After falling out of it a couple of times, she said that she always came back to it.

“I’ve always loved to read and I love words and so It’s just always been a part of my life,” the poet said. “If someone is trying to pursue a career in writing, I’d say reading multiple types of books is a way to inspire writing. Just know that your ideas are valuable and worth writing about as well.”

She also advises that it’s important to find your people in your community or school.

“I’ve noticed that every town has a community of writers so it’s important that you are able to go to someone to read your work for you and get advice from. Just find your people and share your work,” Aronson said.

Aronson is now working on a third project which will be about mortality and grieving. To find out more about Rebecca Aronson or even get your hands on a book of hers, visit https://rebmarack.wixsite.com/rebecca