SCCC hosts its annual Easter Egg Dash in the bookstore 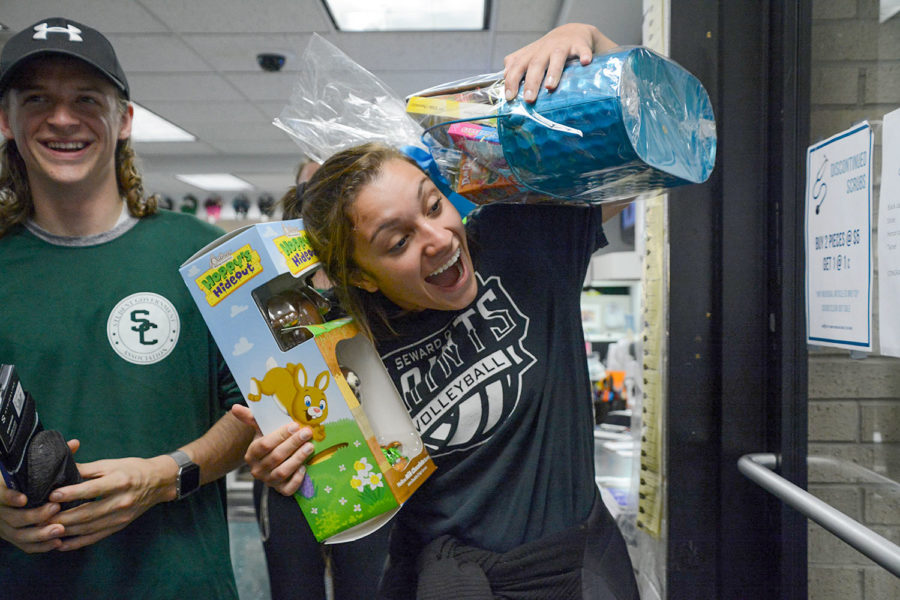 Nati da Rocha gets excited about winning the giant chocolate bunny. The Easter egg she found in the bookstore matched up to this prize. More than 300 eggs were hidden but not all offered prizes.

A sea of excited students waited with bated breath outside of the Seward County Community College bookstore. Everyone chatted nervously with their friends, eyeing the prizes on display in the window, picking out the ones that they hoped to win. Students peeked in the windows of the bookstore, trying to get a look at where the 300 Easter Eggs laid. Many of these would possibly earn them the chance at winning something big or even something small.

“The prizes are actually high stake so I’m really excited! I brought my friends with me because I didn’t wanna come alone,” Natalie Melendez, freshman biology major, said.

On April 16, the SCCC campus bookstore hosted their annual Easter Egg Dash that kicked off at 12:30 p.m. As the doors opened, students poured through the entrance and the Easter egg hunt began.

Students bolted through the aisles looking for eggs, in hopes to get as many as they could. Wade Lyon, director of student life & leadership, gave the group of students instructions, which were to stay on the tiles and wait for the lights to go off. Once the lights went off, it was chaos.

Everyone swarmed and checked every corner of the library, nervously, for an egg that would hopefully get them a big prize.

“I’m anxious because there are so many people here,” Adan Gomez, freshman pre-engineering major from Liberal, said. “I really want to win something, though, so I plan to rush past the cosmetology kids.”

Inside the egg was a piece of paper with a random number, which students were instructed to take to the front of the room for an adult to record on a list, but only one at a time. Some students found one or a couple eggs and some found large amounts.

“I really don’t know how I found so many eggs. I just walked around and got lucky, I guess,” Nestor said.

For some students, this event was a chance to relive a meaningful memory from their childhoods that they hadn’t done since they were small children.

“I feel like this is great, I haven’t scavenger hunted since I was ten,” Lety Gracia, freshman cosmetology major, said.

Once all the eggs were found, names were drawn and prizes were given, which consisted of candies, chips, easter baskets, and even Beats headphones. Sophomore psychology major, Moises Alvarez, ended up winning the pair of beats headphones and cosmetology major, Monse won the Bose Bluetooth speaker.