Thomas prefers to show rather than tell 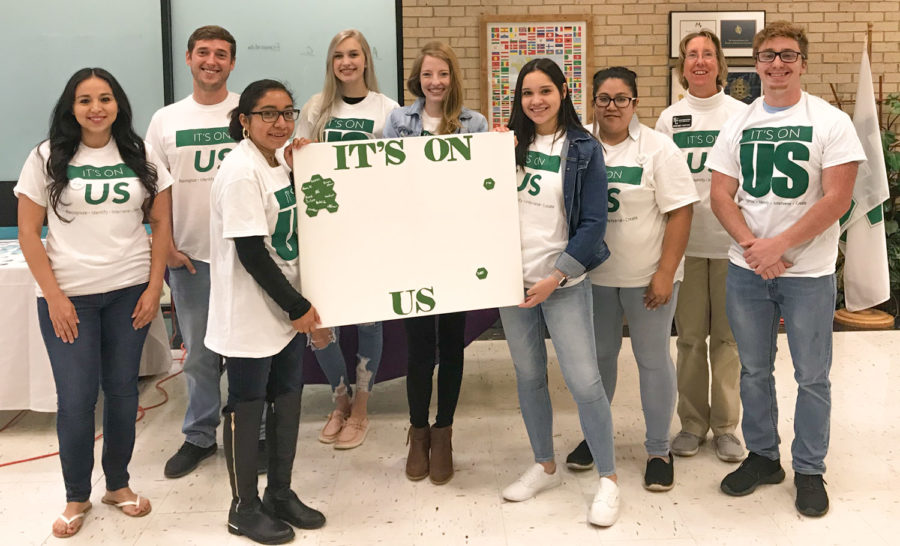 Creator of "Its' On Us," Hunter Thomas, stands with her classmates from her Digital Video Editing II class, and faculty members, all who appeared and helped out with the project for Sexual Assault Awareness month. From left to right they are Janeth Vasquez, Tyler Parks, Rubi Gallegos, Kaitlyn Van Vleet, Hunter Thomas, Ali Lucero, Maria Munoz, Annette Hackbarth-Onson and Bryce Minor.

You may have seen her video played at the Seward County Community College men’s basketball games or the one for sexual assault awareness month, “It’s On Us.” Computer information systems concurrent student Hunter Thomas, is the creator of both videos.

Thomas plans to graduate with her associates in science by the time she graduates high school next year. At the moment, she is working towards receiving a certificate in computer information systems. In the program, Thomas takes classes such as web animation, 3D modeling, 3D texturing, video editing and web page design.

“She is an exceptional student and has an amazing eye for anything artistic or design related. Last semester, she produced the SCCC Men’s Basketball hype video they played before each game as well as social media videos for the SCCC Cheer Team,” Computer Information Systems Instructor, Tyler Parks said.

Thomas’ dream is to one day be a creator and animator for big video game or cartoon companies or to even create her own cartoons, video games and shows.

“I knew I wanted to pursue a career in video game design and animation ever since my freshman year computer class. We worked on adobe photoshop in there and it really sparked my interest in editing and design,” the Liberal High School junior says.

The student decided to enroll in college classes her junior year of high school in order to get a head start in her career and because her high school offered it.

“Being in these classes with college students was intimidating at first but it really opened my eyes to what the college setting is like. It also pushes me to a high level of maturity,” the junior says. “Now, I could say i’m definitely more expressive and open to others than I used to be since I have to have a voice here.”

Thomas gets most inspired to do her work in her class web animation by simplistic animations and “tooty” cartoons as she describes them, such as The Amazing World of Gumball on Cartoon Network and Gravity Falls on Disney Channel.

“I definitely want to create something of that sort when I’m older and animate cartoons or movies someday. I’m way better at showing than telling with words so I’d prefer if someone wrote the script and I just animate it,” Thomas says with a chuckle.

Thomas grew up with two older brothers. They watched a lot of cartoons and played as many video games they could. So eventually, Thomas did the same.

“Growing up around that also inspired me to do something like this because I started to play video games as well. Some of my favorites are Call Of Duty and Halo and my top favorite to play is called Undertale,” the future animator says.

One of Thomas’ favorite creators is Toby Fox, who created Undertale and draws inspiration from his video games to someday create something alike. The motive of this game is to work toward getting out from the underground world barrier and the main player either has the choice to defeat the monsters they come across, or befriend them.

“If I were to ever design and animate a game in the future, it would be something like that. Something simple and nothing too realistic but with a hidden meaning behind the game,” Thomas says. “Most video games like that have hidden meanings but it’s hard to tell at first glance.”

With cartoons, Thomas admits that drawing is something she doesn’t prefer to do, only because it takes time and there are errors. She’d rather use photoshop, where everything is precise.

“I also used to write when I was younger like creative stories but I figured out that I’m imaginative and creative. I’m just better at showing than telling so I’d probably never draw on paper or write,” the student says.

After Thomas graduates from SCCC in a year, she plans to go The University of Kansas and enroll in their animation program there.

“I do hope to someday work for a big company, maybe not like Disney Channel or anything but I definitely want to create my own work some day for people to see. I also want to inspire people with my work and inspire young girls that it is possible to go this route if you really want to,” Thomas said.