Lady Saints rise to number one in recent polls 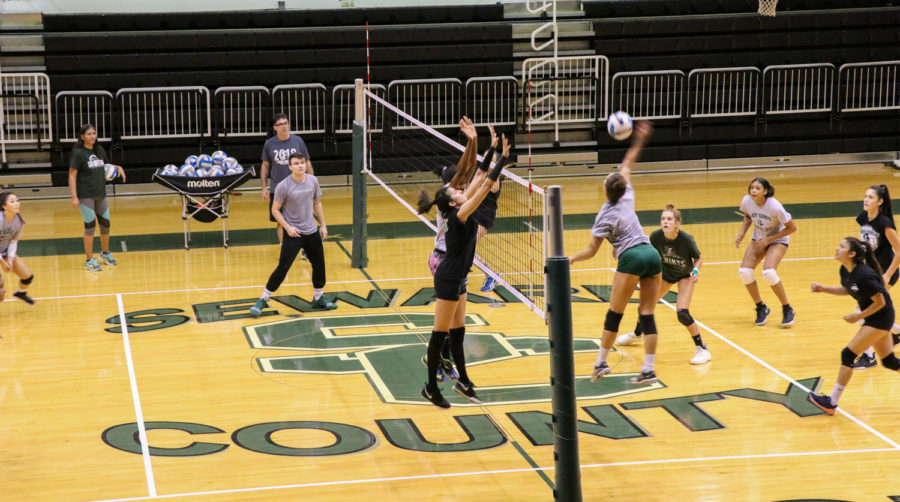 The Lady Saints are still undefeated and have yet to drop a set. The Saints started off the season ranked No. 4. However, due to the ladies being 7-0 overall and 3-0 in the National Junior College Athletic Association ranking, the Saints rose to being No. 1 in the nation.

The Saints had a very successful weekend, winning all three sets against our rivals, the Hutchinson Dragons, winning 25-18 the first set, 25-15 the second set and 25-20 the third.

The ladies say that their mindset doesn’t change when being No. 1, they only strive to improve.

“I think now that we’re number one, we have more of a responsibility to keep practicing hard to stay on the top,” sophomore setter, Laura De Pra, said.

The ladies plan to do their best and bring home a championship at the end of the season and the same hard work is what’s gonna get them there, sophomore outside hitter, Djuly Schmoranz, added.

Last year, the Saints had a historical season during coach Tony Trifinov’s first year at Seward. During his first season, the Saints finished 32-7 and 16-0 in the Kansas Jayhawk Community College Conference, and finishing the season fourth at the NCJAA D1 volleyball tournament. However, even though they finished fourth, the Saints fell just short of their goal.

“It’s always gonna be motivation for us, coming up short like that,” Schmoranz said.

This season, Saints welcome back seven sophomores from the 2018 season, all looking to make it a step further than they did last season. Second year assistant coach, Parker Thompson, said he doesn’t pay much attention to the No. 1 ranking.

“I think It’s great that Tony, Mariela, the girls, and I get to be apart of something that hasn’t been done before, but as far as i’m concerned it’s just a ranking. It won’t matter until we’re holding one of those trophies,” Parker said.

As successful as last seasons team, this team has had a better start to the season.

“I think we had the kids buy in a lot earlier this season than they did last year. It took a while longer last year for the kids to understand what’s at stake, and what they’re capable of,” Thompson adds.

The Saints will look to continue their undefeated season as they travel to Las Vegas, Nevada this coming Friday on Sept. 13.