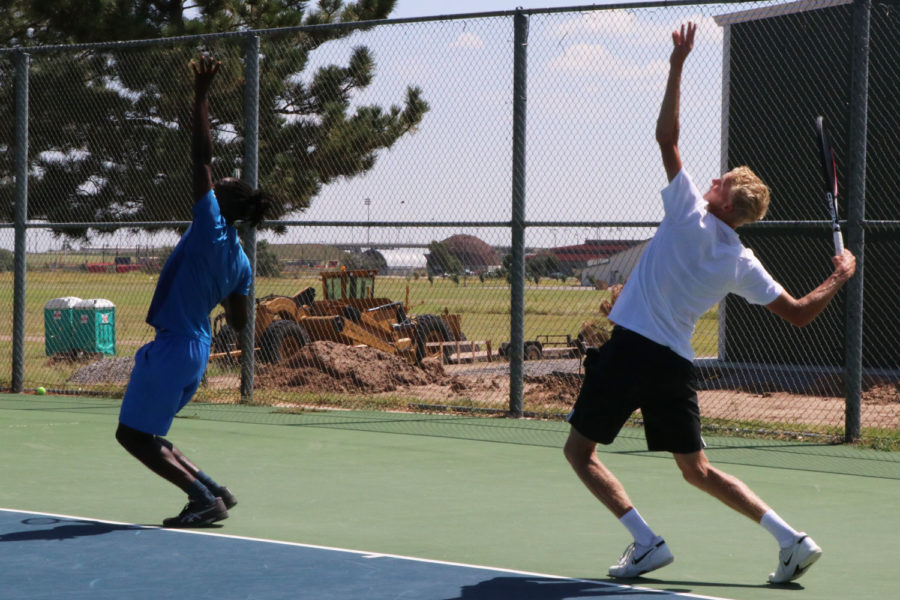 Sophomore Sander Jans and freshman Nil Moinet, focus on how high they have to throw the tennis ball in the air for them to get a good serve.

“Our goal for the individual season is to win regionals and qualify for nationals. We have won the number one regional title now four years in a row, and I hope to make that five,” Chase Ashley, head coach, said.

The tennis teams have seen successes in the past while the men finished third at nationals and the women’s finished eighth due to some injuries players had. This year, however, there are new faces on the teams which brings hope to assistant coach Dylan Strickland.

“We have 20 on the team, and 18 of those are freshmen. Having a new group is positive because it helps us introduce our expectations and our way of doing things. However, our team is always growing, and with that, comes growing pains. But we are very hopeful for this year,” Strickland said.

Ashley adds that the group competes well and they’re a talented group of players.

The Saints tennis team will compete in the regional tournament in two weeks, then nationals start Oct. 17.

“We are non-stop right now, we have tournaments every weekend until nationals. The players have workouts everyday preparing for regionals and nationals. We are looking forward to a great season,” Strickland said.

The Saints tennis team heads to the OKC Invitational this weekend in Oklahoma City. Check out the rest of the season schedules at for men here and for women here.