Qaiyoom “Q” Olanlege plays for the nationally ranked Saints. He aspires to start his own clothing brand. 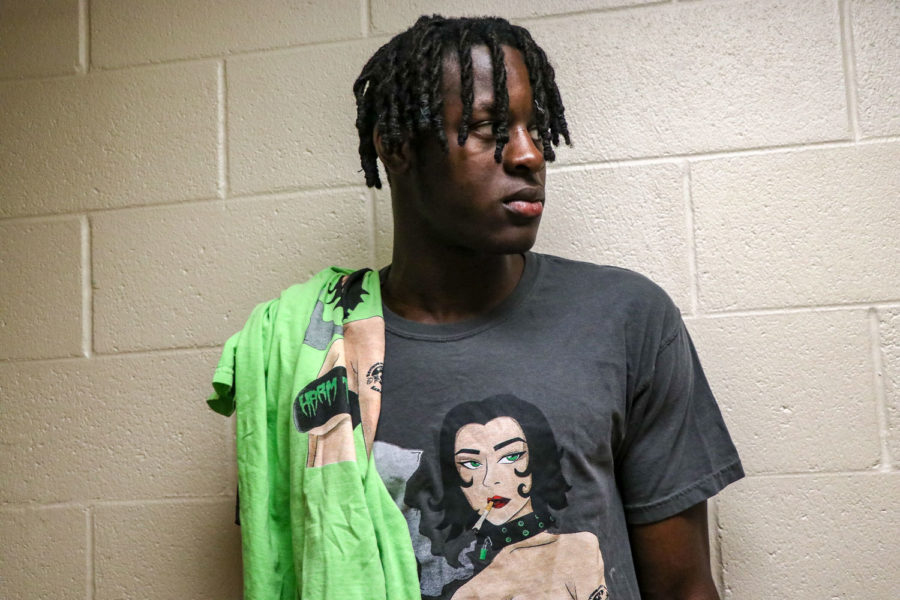 Q Olanlege likes to design vivid images on his computer, then he sends them to his friend, who prints shirts. The Brooklyn, New York sophomore wears his clothes and sells them for $50.

One thing that stands out about Qaiyoom “Q” Olanlege when you see him, is not just his height or athletic ability, but his sense of style. The Seward County Saints basketball player sat with Crusader news at lunch, surrounded by all of his basketball buddies who paid no attention, for an interview.

I promptly pulled my phone out to start recording the interview. Olanlege was visibly not happy about this.

“Whoa whoa, you’re going to record me?” Olanlege asked with hands up in the air to signal a stop to the interview.

I quickly assured him that it’s just for the purpose of recalling what he said. Jokes circled the table which put everyone at ease. The 6-foot-seven-inch guard relaxed and motioned to start the interview.

Crusader: I hear that you design clothes when you aren’t playing basketball, is this true?

A: Yeah, I mean, I designed this shirt I’m wearing.

Olanlege pointed to his bright green shirt, with an animated woman smoking a cigarette, that took up most of the front of the shirt.

Crusader: That’s a pretty signature design. How did you come up with that?

A: I’m on social media a lot. If I see something that gives me an idea, I use that creativity to make something of my own. Sometimes I will see maybe just a commercial or a movie, that will give me an idea to design something. Like this shirt, I saw some cartoon girl and had this mental image pop up in my head, and that’s just how it works.

Crusader: How do you design? Is it on the computer, do you have to order the shirt?

A: I come up with the design and send it to a friend of mine who puts it on a shirt because I’m not that good at it yet. That’s what I’m going to school for though.

Crusader: Did something or someone inspire you to make your own clothes?

Crusader: You are from New York correct? Did that influence your style?

A: Yeah, I’m from Brooklyn, New York. But not really much influence because in Brooklyn, the part I’m from, has like a lot of culture and a mix of stuff. I think there’s followers and individuals in this world. I’m obviously an individual.

Crusader: Being a big guy on the basketball team, and also a guy who sews and designs clothes, do your teammates still think you’re cool, or like kind of tease you about it?

A: Not really, yeah they think I’m cool. I think so.

Olanlege turned to ask his teammates if they thought of him as “cool” and they sarcastically agreed.

Crusader: How do you get your clothes out there to the public?

A: Well, by wearing it first. People can see that I’ve built sort of a reputation and have cool shirts and hats and associate me with that. I also use social media to self promote my stuff. I have friends back in Brooklyn who wear clothes I’ve designed. But yeah, I use Instagram a lot to post my stuff, and I just put it out there. I get pretty good feedback on social media too, which helps me make more designs.

Crusader: Is that the goal? See other people wearing your stuff?

A: Definitely. I would love to see a total stranger one day wear something I created. It would be crazy to go back home and see kids with my stuff on, I don’t really know how I’d react. That’s what I’m studying in school, like I love basketball, but I need to have something outside of basketball too. Someday I want to have my own clothing brand.

Crusader: So basketball and clothing design would be your two major passions, do they ever mix?

A: No not at all. Those are the separate lives of Q. I like to keep basketball as one thing, and my other little hobbies as another.

Crusader: Is it important to be seen as more than just a basketball player?

A: I mean, yeah kinda because that’s not all I do. I like basketball though, this is my second year here and I feel more like a leader.

Crusader: With basketball coming up, will you design anything for it?

A: No probably not. I like to stay focused on one thing.

This interview has been edited and condensed.