Life out of the country 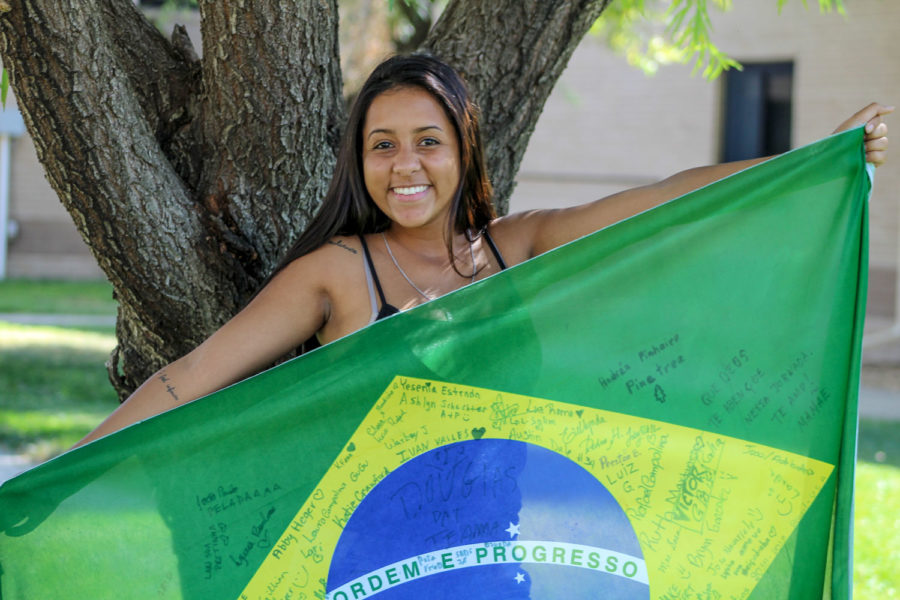 Freshman biology major, Victoria Martins, proudly holds up the flag of her home country, Brazil, as she poses for a picture. Signatures from her friends in America and her hometown, Sete Lagoas, Brazil, paint the flag. When asked for a picture, Martins stated that she was not going to dress nice everyday so anytime would be good. Martins shared some of her culture and also recalled some American culture she found strange.

Right as Victoria Martins sat down, Crusader reporter Preston Burrows could tell she was comfortable. The first question made her hesitate and then giggle: What weird things do Americans do?

Martin is from Brazil and answering that question was a slippery slope. She’s afraid that she might offend someone either here or back home. Instead, she pointed out the many similarities and differences between the two countries. From Americans’ weird—but funny—habits to chicken and noodles being a Sunday favorite, this interview brought to light Martin’s take on “What is different?”

Q: What is the weirdest difference between the countries? Is there anything that we would consider normal but you think is strange?

A: Dating. Here, if you make-out with a guy, people would think you are immediately dating. In Brazil, you hangout, make-out and go home. Until a person says that they like each other, then they aren’t an item. In Brazil we would take longer to commit ourselves to one person. Here in America, it happens so fast. In America, if I kissed someone, the next day we would be dating and that would be weird to me.

Q: Where is your hometown and how would you compare it to “small” Kansas?

A: I am originally from Sete Lagoas, Brazil.

Confused at the spelling of the Brazilian city, reporter Preston Burrows asked for the spelling.

S-A-T-A L-A-G-O-A-S…wait those aren’t the letters, I meant the other one. The letter e. It should be S-E-T-E. You could say my town is bigger than Wichita. It was really hard to adjust to a smaller place but I did enjoy the community aspect of rural Kansas. I feel safer here since it is smaller. I admit that I miss the loud people from my country sometimes but sometimes it is nice to be “chill” which is good with me.
Click on the map and use the arrows to navigate Martin’s journey from Brazil to SCCC:

Q: Is this your first time in America?

A: No. I actually came here a year ago and attended Hugoton High School. I graduated and then returned back to my hometown for your guys’ summer, it was winter in Brazil for me. I wanted to have the American opportunity so I decided to come back to my host family and attend college at Seward County Community College. What really caused me to find out about America was the movies. I loved High School Musical. The student life, prom, graduation, and the overall difference of school made me very interested to travel to the United States. The American culture that the movie showed really caught my attention and made me want to experience it for myself.

Q: What gave you the opportunity to travel here as a foreign exchange student?

A: I went to an agency and paid a program to come to the United States. My host family was apart of the program and they had to choose me. That is the reason I ended up in Kansas. We had to do the application and shit. You could almost say it was like an adoption.

Q: Where did you start learning English at and was it hard?

A: Here.[laughter] No, like I went to school for nine months and learned the basics of English. I learned my English from a school that taught English in Brazil. The class would speak in English but the teacher would tell us the grammar rules in Portuguese. There were about sixteen schools that taught English in my city. These were more advanced schools and were not like something you could get taught in high school. In school they would teach English classes but they could be compared to America’s Spanish classes. Usually a person cannot speak fluent Spanish unless they take another course. This was the same case with English in Brazil. I did not find English very difficult to learn. I think Portuguese was harder than English.

Q: What do you miss the most about Brazil?

A: I would say my family and food. Food is a yes. My favorite meal in the US would have to be chicken noodles with mashed potatoes. My favorite food from Brazil is rice, beans, beef, and french fries [noodles]. I would eat this everyday in Brazil, it would be our lunch but in America noodles would not be an everyday meal. It is more like a sunday special here, when in Brazil we eat it as Americans would eat hamburgers. Even though I miss my family, I was ready for the opportunity. I was ready to be here, know different people, and learn a different language. Although this was scary because of the language barrier, I knew I wanted this experience.

Q: What is an activity you are looking forward to do in America that is not present in Brazil?

A: Sports. In Brazil there are sports but they are not as important as they are here. Brazil does not support the states enough to have good sports so this is what I like about America. Basketball and football are some of the things I am excited to watch. Another thing that I am looking forward to is America’s community service. I think Brazil needs more of community activities and involvement and I wish Brazil would have clubs that helped each other like we do here.

Q: How is the culture/people different in America than it/they are in Brazil?

A: Everything is different. The school, the food, the weather, how we talk to each other. My culture is more open, so I found it hard to make friends. In Brazil, we give hugs and are very warm but here people are more closed off and would rather shake each others hands rather than go in for a hug. I like people here, but I love people in Brazil. They are nicer and I might just think that because I grew up there and understand their warm culture. Some Americans come off cold and like I said earlier, it was hard to make friends because people from my country are more open and not afraid to be friendly.

Q: How is the education system in Brazil? Is college more important in America?

A: I don’t know, it is just different. The hours and the method of teaching are very opposite. I would not say that education is more important here than it is in Brazil, but you have more opportunities here. My grades were really bad in Brazil but improved when I came to America. The teachers here show interest and aren’t just like, “Here is this, can you do this.” Since I was sent to a smaller place in the United States, I think the community helps the education system and students be successful. The schools and families did not really see college as important so the people my age stepped up and realized it is super hard to get a job in Brazil and make good money. Now, people who graduate are going straight to college, which is a big shift than how it was two years ago. All the school cared about was the national exam that would place people into college. This exam is so hard to pass, that many students get depressed because they may not have made the grade to get into college for free and they would have to wait until the next November. College is so expensive in Brazil, that this test is what gets you in because you would have to make good money to attend without a good test score.

Q: What’s your major? Could you have done this major in Brazil?

A: I am majoring in biology right now and plan to transfer over to K-State for biochemistry and then eventually become a forensic scientist. The main goal is to get my Masters in Biochemistry. I could have been a forensic scientist in Brazil but it is not what I want. I would not be getting paid what I deserve in Brazil even with years of studying. American jobs pay way more. A lot of Brazilians want to come to America for this reason. We work hard but we would not be getting paid fairly.

Q: Do you plan on living the rest of your life in America or going back to pursue a career in Brazil?

I plan to stay here and pursue my career here. I have taken steps to live in America or have at least thought of them. I can study for two years at Seward on my visa and then transfer over to another college where I will get another four years to get my degree. I have six years on the visa. I am taking twelve credit hours to be staying here legally and following the rules of the visa. After five years I plan to apply for a green card and eventually become a citizen so I can live out my dream.

This interview has been edited and condensed.