SCCC students speak up about future of vaping 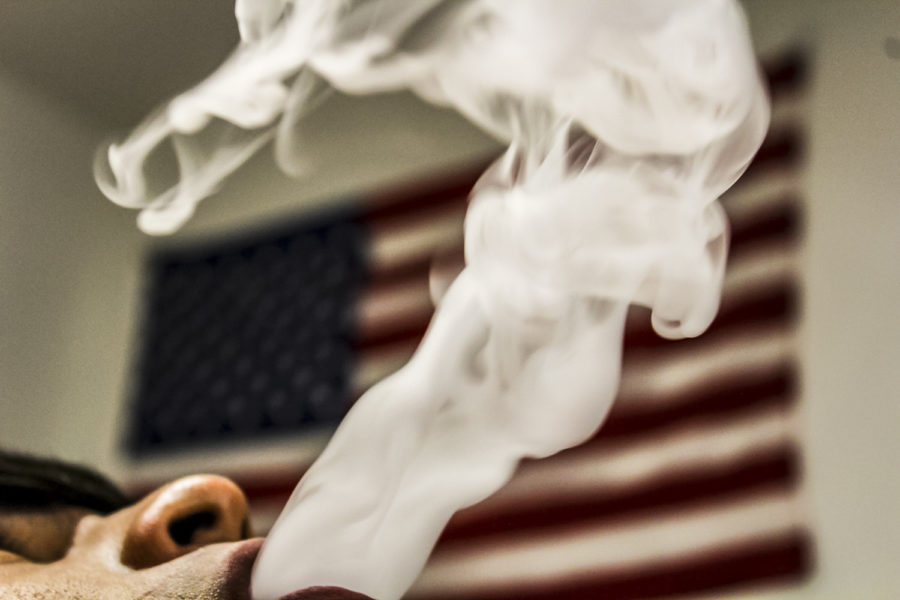 As a vapor cloud rises in the air, an American flag hangs proudly behind it. With 47 states already having restrictions such as no indoor vaping, people are showing initiative to make a change in the nation. Massachusetts has even took steps further and banned the sale of all vaping products for four months.

A puff of steam escaped Hailey Logarth’s mouth and filled the room. The air smelled like strawberry, mint, watermelon and tasted like candy. However, behind the bubble gum exterior lies controversy. So much so, that Logarth asked for her name to be changed.

The vaping controversy began in earnest when reports of it causing deaths across the United States surfaced. Recently, CNN reported that a man from Kansas passed away due to vaping related causes.

Vaping is not anything new. It emerged in the early 2000s as a way to quit smoking. Through the years, vapes and e-cigarettes have evolved to be flavorful and colorful experiences that replace smoking, but they are not always a useful quitting tool.

On college campuses, especially Seward County Community College, vaping is a trend that has been steadily on the rise. Students will often take out their vapes as they walk to another building between classes.

There has been a lack of research done on the effects of vaping, causing some states to consider banning vape products altogether. Logarth, a freshman at SCCC, has used vape products and has an opinion on the future of the activity.

“I don’t think they should ban vaping because then teens and young adults will switch to cigarettes,” Logarth said. “As long as they use the device properly with the proper juice, they should be fine.”

Vapes today come in different fruity flavors and compact, easy to conceal packaging. This has lead those against vape usage to question the use of fun flavors and scents in their products.

“They should keep the vape flavors because that’s what makes them appealing, if not people would just resort to cigarettes which I think is worse,” Logarth said.

The New York Times reported that the Trump administration is considering banning vapes and e-cigarettes. States like Massachusetts have issued a four month ban on the products. Some states have considered banning the flavors the products come in, but not the vapes themselves.

Vapes and other e-cigarette products have been reported to malfunction, overheat and potentially cause harm to the user. This has lead some students to stop vaping.

“I quit vaping over the summer because my vape broke, I didn’t feel like fixing it and it kind of encouraged me to just stop altogether,” Casey Simmons said. “I don’t really think they should be completely banned, but more research should definitely be done to make it safer.”

In Kansas, two deaths have been reported with vaping being the cause. However, both people were over the age of 50 with previous medical issues. Both SCCC students felt this didn’t call for any legislation to take place.

However, while students at SCCC seemed unaffected, the rest of the country is still in debate.

The Center for Disease Control reported that the number of vaping related illnesses across the nation has reached 805 people.

“I think it’s too late to take this sort of action, people are already hooked on [vaping] and they will try to find their fix somewhere else in cigarettes, weed, or whatever works, which I feel is worse,” Logarth said. “Research should be done but it’s the people’s choice to buy the product at the end of the day.”

While vaping appears to be blowing up in smoke, it is still a booming industry and continues to be popular among students and young adults. Some students believe that they should continue to be sold and available and the fun flavors should be kept. However, others believe more research should be done to make vaping as safe as it can possibly be.