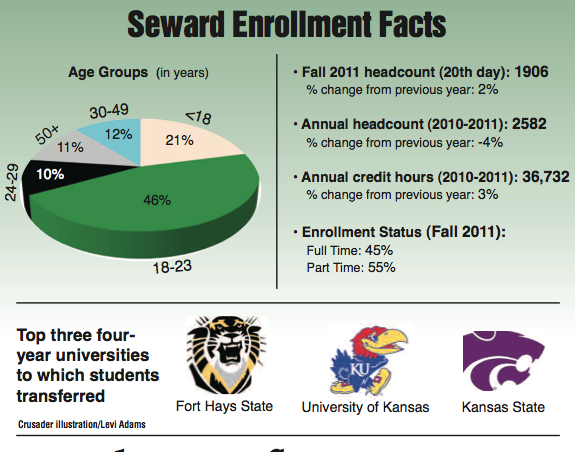 The numbers are in and the demographics have been released. This academic year, 45 percent of students are enrolled full time, and there are 55 percent enrolled part time. Overall there has been a 2 percent increase as compared to last year’s fall head count according to the numbers collected by Teresa Wehemier, the college’s research analyst. The majority of enrollments are part-time. Many students juggle a part-time or full time job and attend college as well. Other students are non traditional and have decided to come back to school in order to obtain a degree. Whichever the case, the numbers in part time enrollment increased from last year’s. There are four top age groups that attend Seward: ages 18-24 hold the highest place at 46 percent, teens up to the age of 18 hold second with 21 percent, those age 50 and over hold there spot at 11 percent, and a close fourth position is held by ages 24-29 with 10 percent. Compared to last fall there has been a three percent increase of attendance by those age 23 and younger. This fall 66 percent of students fell into this age category as opposed to last years 63 percent. More notable than that, there has been a seven percent increase in students aged 24 and up. This shows the large increase in nontraditional students attending Seward. Last year this age group made up 37 percent of the student population, and this year they escalated up to the mid forties at 44 percent. The residencies of those attending SCCC stand at 51 percent for Seward County residents, other Kansas residents hold 30 percent, and nonresidents make up the remainding 19 percent These numbers were provided by Teresa Wehmeier, research analyst of SCCC/ATS, and can be viewed on sccc.edu, under the About SCCC/ATS, Research and Assessment, Fast F&Q’s.