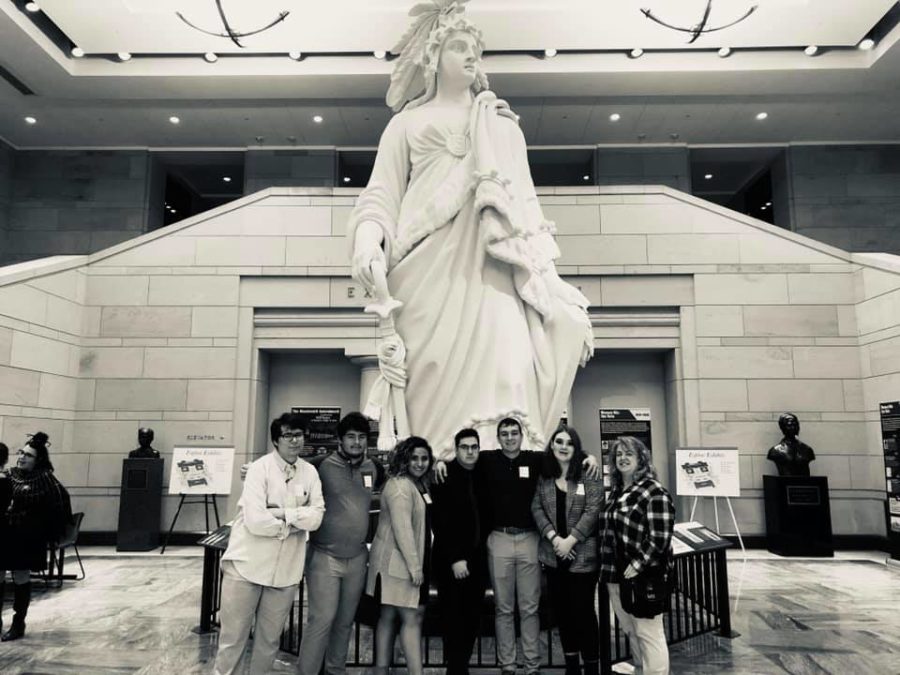 The Crusader News staff took a tour of the Capitol building in Washington D.C. During their tour, they got to see a live meeting of the senate court.

It was a surprise to the young journalists of the Crusader News Staff to hear that they had won first place in the Two Year Website of the Year category for the 2018-2019 Newspaper Pinnacle Award. This was an award category that their advisor Sue Sprenkle had entered their website, in the spring of 2019. The award was based off of last years website.

This award was presented at the ACP/CMA Fall National College Media Convention that took place in Washington D.C. Oct 31- Nov.3. The news staff headed out to attend the conference on Oct. 30, a day before the start of the convention.

“I was surprised to hear that we had won, not in a bad way, but I feel that because our advisor shows us tough love sometimes, we forget that we can hold our own,” Cheyenne Miller, sophomore english major, said. “Obviously there are a lot of talented people on staff and in a way, even though I was surprised, I feel like it’s well deserved for our writers.”

Sprenkle said was proud of the group for winning such an award and that last years staff worked hard.

“They really reached out to the student body last year and the college and found articles that personified Seward County Community College. I was super happy to see that happen for them,” Sprenkle said.

Sprenkle said that one of her favorite things about last years website was that they had converged media such as graphics, videos and graphs. She adds that when a community college can put that much into a story, people are surprised.

The team also placed seventh in Best of Show. Best of show is an award that is given to those that are only at the convention. Judges critique the website and what is going on for the particular website on that given day.

“It was a slow week for us and the fact that we didn’t have people uploading for us back home and we placed, makes me proud of our staff,” Miller said.

Aside from winning an award sessions, workshops and keynote speakers were all events that students could attend and of course, win awards. The sessions were taught by professional journalists who have been in the profession for quite some time.

Student journalists from all over the nation had the opportunity to learn a plethora of things such as ways to be a better editor, how to make social media more interesting, how to come up with story ideas and how to get internships.

Miller attended a session on how to become a better copy editor and noticed that journalism isn’t just about reporting, “there always needs to be copy editors and there’s always other careers you can get into with journalism, you don’t just have to be a journalist or reporter.”

Sophomore journalism major Calen Moore attended a session about how to not lose your empathy when you’re reporting, which was his favorite. He liked hearing that it’s okay to be an empathetic journalist.

“One does not have to sacrifice their humanity for a story and I liked hearing that,” Moore said.

These sessions focused on things that were more than just the basics of reporting, such as politics and how to cover politics. Miller attended a session called “The Inside Story of Covering Trumps White House”

“This session in particular really interested me because I am interested in politics. Fred Lucas spoke and he was a White House correspondent during Obama’s term and still is for Trump. He basically talked about how chaotic it is being a correspondent now with Trump in office,” Miller said.

Aside from the learning and convention, the group got to sight see around Washington and experience the rich history the city holds. On the first night, the staff went to the National Mall, which is where the Washington Monument, the Capitol, the Lincoln Memorial and multiple history museums stand.

“My favorite non-convention thing was seeing the Capitol and getting a tour of it because I like that sort of thing. It was beautiful from the inside and we were there on a historical day for the impeachment vote,” Miller said.

All three of them had different things and advice to give about journalism, since all three came from different journalism backgrounds. Baron answered questions about what it was like working in Boston at the Boston Globe and working on such a big investigational story about the cover up of clergy sexual abuse, which won the Pulitzer prize for public service and was also portrayed in a movie called “Spotlight.”

Phillips spoke about what it would be like to be a reporter and how to get into the business. She mentioned how diversity in the newsroom was important, but how it was more than just skin  color. Sprenkle said she admired that about her and how she encouraged students to keep their newsroom diverse.

Totenburg was favored by Sprenkle and said that she fangirled about her because she listens to her podcasts all the time. “I kinda wanted to shove students aside and ask her questions myself during the Q&A’s.”

The Crusader news staff also got hit with a few unlucky events while on the trip, but they managed to power through and make light of the unfortunate circumstances.

“Everything that could have gone wrong, went wrong. Monica dropped her phone and broke it our chief editor missed her flight on accident and everyone got sick while being there, so I kinda thought we were doomed from the beginning,” Miller said. “But I think that shows a lot about our staff, when everything goes wrong, we find ways to push through.”