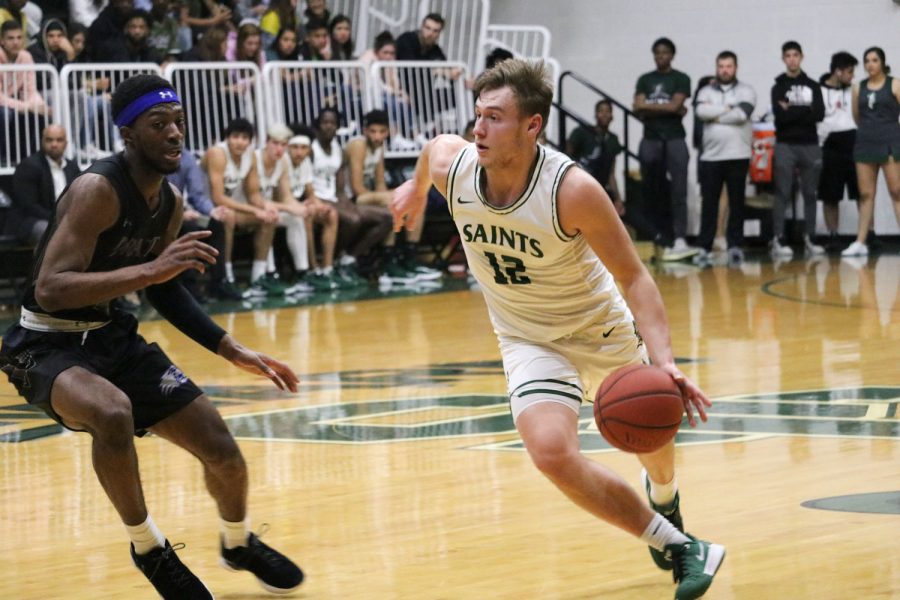 Kyle Cardaci drives to the basket. The sophomore guard is from Holmdel, New Jersey and helped lead the Saints to a 68-63 victory over Pratt Community College. The win was the third in a row for Seward and takes them to 4-5 in Jayhawk West Conference play.

The Seward County Community College men’s basketball team won against Pratt Community College in the greenhouse on Jan. 15, 68-63. This is now their third win in a row, improving to 11-7 overall and 4-5 in the Jayhawk West.

The first half was a dead heat with a 30-30 tie going into the second half.  The Saints managed to get their offense going with a 21-7 run to take a 51-37 lead with 9:24 remaining in the game. But Pratt came back to tie the game.

Samuel Henderson snapped the tie and gave Seward a 64-63 lead by hitting one-of-two from the free-throw line. After coming up with a defensive stop, Kyle Cardaci connected on a short corner jumper with time expiring on the shot clock to give Seward a 66-63 lead with 18 seconds left.

Seward was led in scoring by Rostyslav Novitskyi with 18 points and 6 rebounds and Ramiro Santiago contributed 15 points on 3-of-5 from behind the three-point line and 6-of-8 from the free-throw line.

The Saints will play again on Saturday against Dodge City Community College at Dodge City. The game will tip off at 3 p.m.