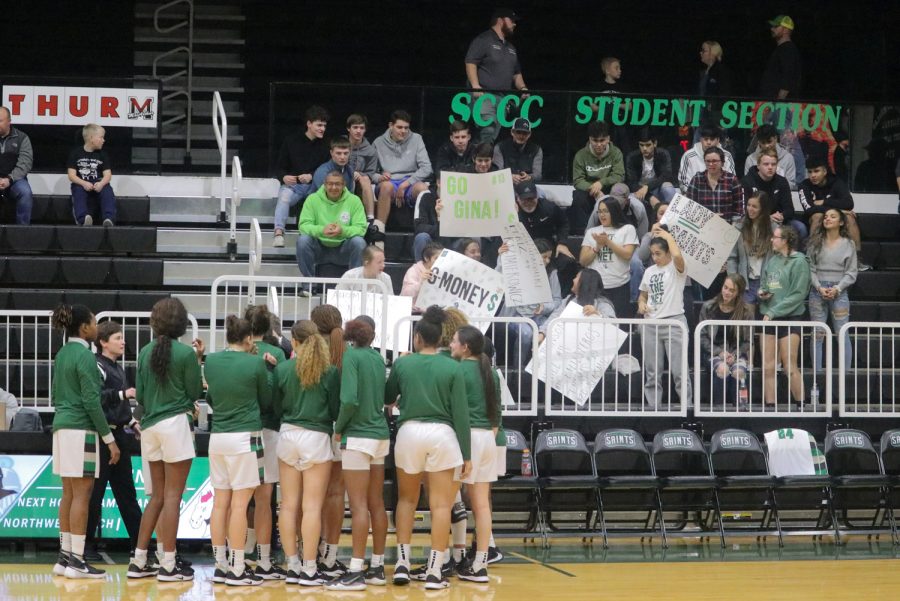 Ulysses High School came to support the Lady Saints in the Greenhouse. They made posters to show support for the women’s team and their hometown player, Gina Ballesteros. One aspect of the “Greenhouse magic” is the fan base comes from area towns as well as Liberal.

The Lady Saints are in the midst of an incredible win streak at home. They remain undefeated in the last 61 games in the Greenhouse. The streak will be put to the test tonight against arch rival, Hutchinson Community College.

To be honest, no one is surprised that the women’s basketball team is 61-0 at home. Winning in the rowdy Greenhouse isn’t a new thing for Saints Nation. It’s in their DNA.

The legacy began back in 1995 when the women won a home game. It didn’t seem like a big deal at the time, but game-after-game lead to season-after-season of finishing strong in the Greenhouse with a win.

Long time Seward County fan, Stevie Alexander, witnessed many of the games during the first streak. Alexander remembers how fun it was to watch the girls play and how they always played so well together.

The first streak lasted nine years until in 2004, Hutchinson did the unthinkable and pulled off a win on the Lady Saints’ home turf. That streak ended with 135 wins and is still the longest home-winning streak in the National Junior College Athletic Association.

For some, living up to this legacy might seem stressful, but sophomore forward Karolina Szydlowska says it actually motivates them.

“We are making history, and it’s really amazing to be a part of it,” Szydlowska states.

The new streak began exactly four years ago on Jan. 30, 2016 with a win over Dodge City Community College. The Lady Saints have held strong at home ever since.

Both Szydlowska and Head Women’s Basketball Coach Austin Mefford agree that the Greenhouse and it’s fans are a big part of why teams now, and in the past, are able to win consecutive home games.

“Playing at the Greenhouse is something that I have never experienced before. The atmosphere and crowd are unique. Playing on the home court is our strength and it is always fun,” Szydlowska says. “We practice here every single day so most of all that builds our confidence.”

Mefford points out that the number of points the team scores together at home versus away games shows the impact the atmosphere of the Greenhouse has on the team. This also makes it an intimidating place for incoming opponents.

“When you walk into the gym, the first thing you see is all the banners. The success here, of not just Women’s basketball, but all sports. Sometimes you have teams very intimidated before the game even starts,” Mefford says.

Not only is the Greenhouse packed with banners, but the stands are also filled with SCCC fans who also play a role in the success. Fans drive in from surrounding towns, not just Liberal. The ticket price is affordable – normally local businesses take turns buying out the gym, giving free admission for fans to pack the house.

“We tend to have more fans than almost all of the teams in the conference, even at away games,” Coach Mefford adds.

With the help of the fans, the Greenhouse and just the history the Women’s basketball program holds, the Lady Saints are confident they will continue to work towards the 135 game streak. The team came up with a motto last season, “refuse to lose” and that is exactly what they do.

During a close game on Jan. 30, it never crossed Szydlowska’s mind that her team could potentially lose their 60 game streak.

“The possibility of losing the game didn’t cross my mind for a single second and I don’t think it did to any of my teammates,” she says. “We knew we were going to win and any mistake we made didn’t make us doubt it.”

Although the odds are in their favor, they will still have to face some teams that will give them a run for their money, but both the players and coaches are not the least bit worried.

“I am not able to say that there is any possibility of losing at home. We are a confident team, with a winner’s mentality. We know our worth. There will be good teams that we will face on our court like Hutch, but we will be prepared and ready to go, ready to play,” Szydlowska says with confidence.

The confidence the Seward County Lady Saints have, along with their ability to execute and win games together as a team, proves that they are well on their way to a successful season, inching closer to that 135 game record each home game.

“It will be stressful at times,” Szydlowska surmises. “But you just have to rely on the team and trust that they can get it done.”

The Seward County Lady Saints will take on the Hutchinson Lady Blue Dragons in the Greenhouse tonight at 6 p.m., where they will look to move their home game streak to 62 wins.