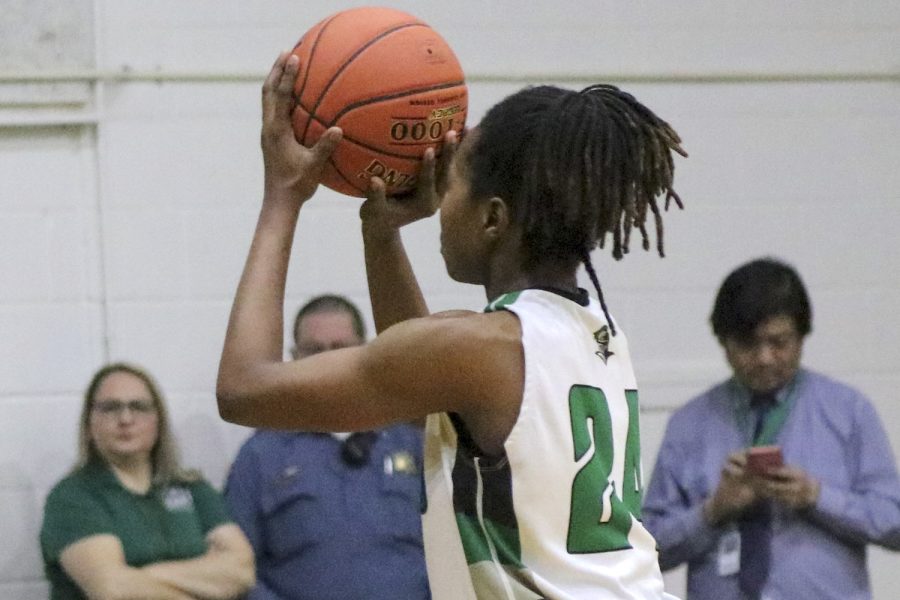 Wanda Cuamba (#24), sophomore at SCCC, gets ready to shoot her shot at the February 1 game.

The 61-game home win streak for the Lady Saints came to an end on Feb. 1. Hutchinson Community College won in a close game of 72-70.

The loss dropped Seward to a tie for first place in the Jayhawk West with Hutchinson at 13-1. Seward is 18-4 overall.

Hutchinson had a quick 15-2 lead in the first quarter. The Lady Saints only managed to score five points, ending the period 20-5. With 3:07 left in the third-quarter Aquila Mucubaquire made a three-pointer bringing the score to 27-25 but Hutchison answered.

In the second half, the Lady Saints started off with a 6-0 run to get the game back within single digits. At the end of the third-quarter the score was 57-52.

In the fourth quarter, the Lady Saints took the lead with 6:17 left. Leilani Augmon made a mid-range jump shot to take the lead with a score of 59-58. Every time the Saints tried to take control, the No. 8 Blue Dragons scored to keep them in the game.

With the Lady Saints down 70-67 and only 19 seconds to go, Tianna Johnson made a three pointer to knot the game at 70.

The game ended with a heartbreaking Hutchinson layup in the final seconds, making the final score 72-70.