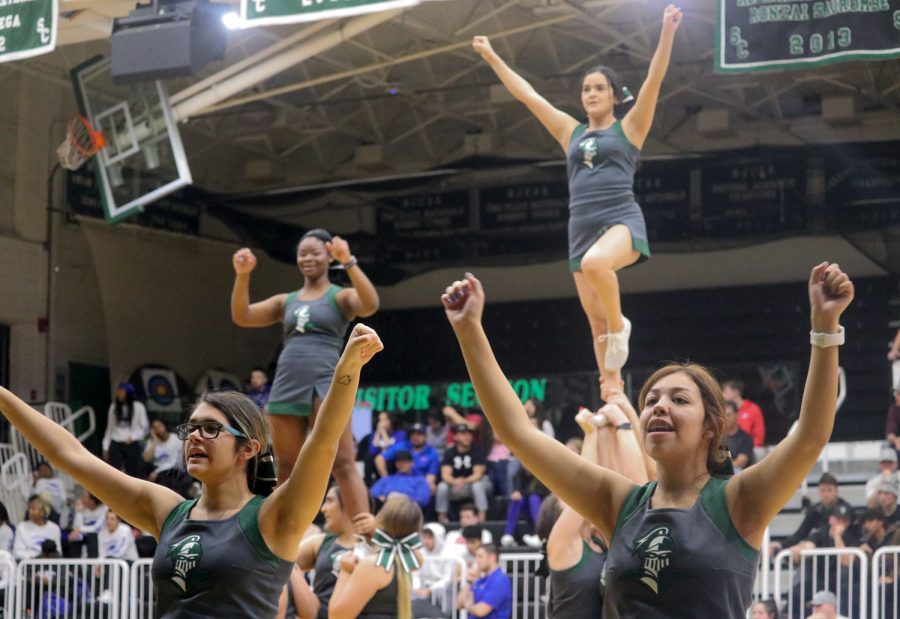 The cheer squad usually performs during a time out and half times. Their routines involve dances and stunts. Sophomore Emily Borjas is seen doing a liberty stunt in the background.

You see them on the sidelines in the Greenhouse. They cheer on the Saints and the Lady Saints during basketball games. They entertain crowds at half-time. They are the Saints Spirit Squad!

Their motto is, “Behind every great team is a great cheer team.” Where the teams go, the Spirit Squad goes, whether it’s a pre-season tournament at home or to a national tournament. They practice long hours, just like other athletic teams.

Fans rarely get a chance to know the in-depth details about this little known athletic team. Crusader News sat down and spoke with Nayeli Galan, Lizete Olivas, Yamilex Perez, Alicyn Carey and Madison Tilford to learn more about their experiences with cheer.

Q: How long have you been cheering?

Tilford: “This is my first year in cheer! I used to do dance in high school and I attended Garden City Community College for a year where I continued to dance. Now, I cheer here.”

Q: What is your favorite thing about cheer?

Galan: “The excitement of it all. I love performing and trying new routines and stunts! It’s all very exciting!”

Tilford: “I love when we work as a team and pull performances together! I love when we also have team bonding! I love getting closer to the team!”

Perez: “For sure the stunts!”

Q: What is your least favorite part of cheer?

Olivas: “With the whole idea of it being cheer, we do have people who bring in drama and will let anger linger around. My least favorite part is the drama.”

Q: Why do you think cheer is not taken as seriously as other sports at SCCC?

Galan: “I think it’s because the cheer program did have a downfall a few years ago, but now, I honestly believe we are better than ever and we’re going to show off.”

Carey: “Us not be taken serious might have to do with the fact that we accept local girls who have never been in cheer before. It’s great that we are giving new people opportunities but we need to be a little more stricter on try-outs. We also should be recruiting girls from far away more often.”

Perez: “It probably has to do with the fact that we accept almost anybody and we should be making try-outs hard so we can have the best of the best.”

Q: Is there anything you would like to say to people who believe that cheer is not a sport?

Olivas: “Yes! You try catching 100 pound girls… and not actually dropping them!”

Q: What can we, the public, look forward to this year with the new cheer squad?

Galan: “New performances! New routines! We are coming HARD this year! Be ready!”

Tilford: “With this new team, expect a lot of greatly executed performances and stunts!”

Q: What would you like to say to young girls/boys or incoming students that want to try out cheer?

Tilford: “DO IT! You will love it! I was a bit scared at first, but once you break through it’s all ‘work hard, play hard’!”

Carey: “I don’t know if trying it for the first time at a college is a smart idea, but we do have quick learners. I guess I’m trying to say if you learn quick and you’re passionate, you should have no trouble.”