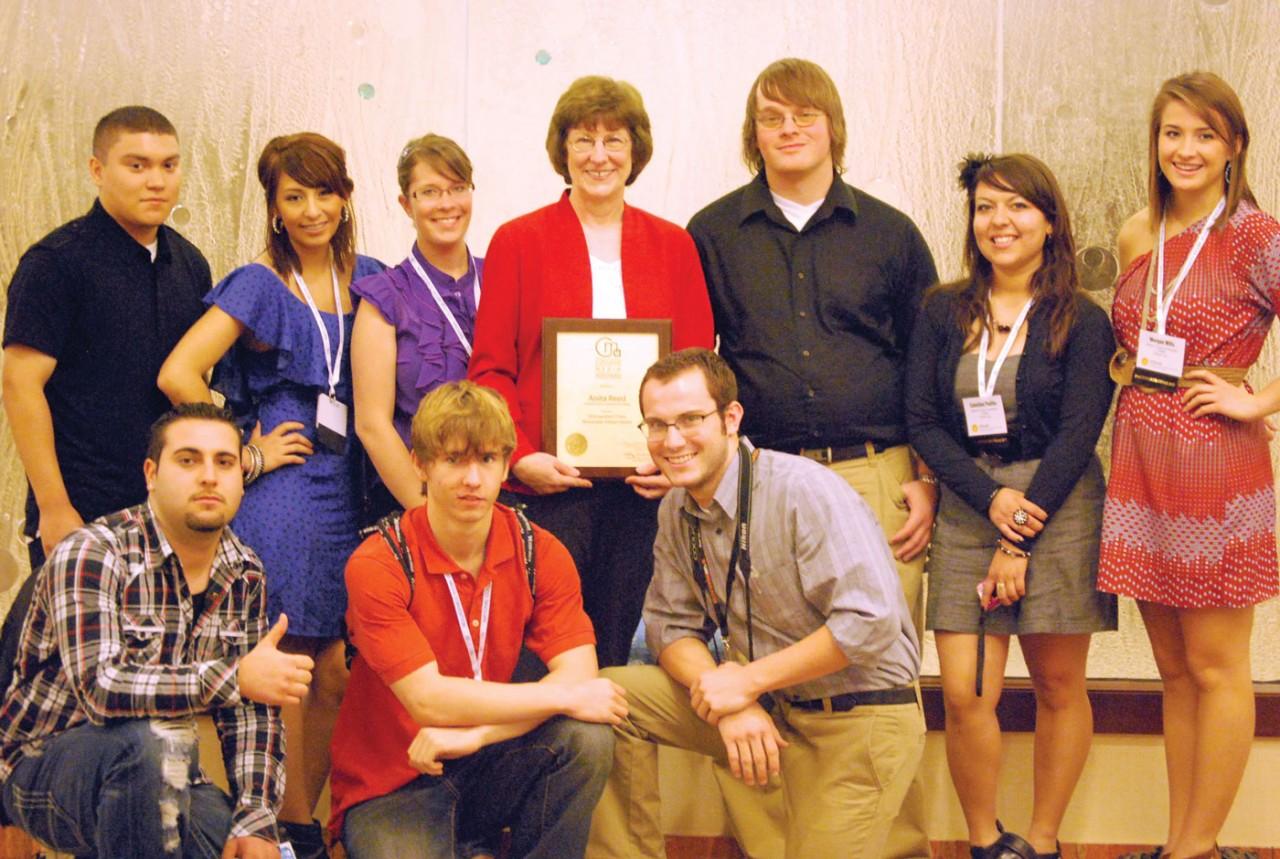 Nine Crusader staff members and adviser Anita Reed were awed with the tropical wonders of Orlando, Fla., when they traveled to Orlando for the 90th annual National College Media Convention at the Renaissance SeaWorld from October 26-30. More than 2,200 people attended the convention, according to Logan Aimone, executive director for the Associated Collegiate Press. Aimone said that this amount was definitely more than last year’s convention in Louisville, Ky. People from Alaska to Hawaii to New Hampshire traveled to sunny Florida for the convention. Aimone is proud that it was the 90th National College Media Convention and says it has grown a lot over the 90 years. “It started with around 100 people and is over 2,000 now,” Aimone said. Part of the reason Aimone thinks it has grown so much is because of the change in social media. As director for five years, Aimone has been able to see the drastic change in journalism. “When I started, there was no Twitter and Facebook was not nearly as popular. Now, we are so integrated with Twitter and Facebook and always connected. It’s a very interesting phenomenon,” Aimone said. The NCMC is a convention in which thousands of journalists and advisers from across the country come together for courses and critiques to improve media. There were more than 400 sessions available for students to attend, including ones by famous journalists and photographers, including Tim Harrower, well-known designer and textbook author; Mark Russell, editor of the Orlando Sentinel; and Patrick Farrell, photographer at the Miami Herald. Vadim Lavrusik, journalist program manager for Facebook, was the ending keynote speaker. He was originally scheduled to fly in to Orlando, but because of a massive winter storm in New York City, he could not make the convention. Instead, he spoke to the group, as the first keynote ever delivered via Skype at the NCMC. Many awards are presented at the NCMC, such as two awards the Crusader won from work completed in the 2010-2011 school year and one award from this year. The first award won was to recognize Crusader adviser and journalism instructor Anita Reed as the 2011 Distinguished Adviser of the Year for two-year colleges. The next award received by the Crusader was that of a Pacemaker Finalist for two-year college newspapers. Entries were judged by professional journalists in the Washington, D.C., area. Finalists were selected based on excellence in coverage and content, quality of writing and reporting, leadership on the opinion page, in-depth reporting, layout/design, photography, art and graphics. The Crusader did not win a Pacemaker, but even nomination for one is a great honor. The Crusader was also awarded a sixth place Best of Show Award for two-year broadsheet newspapers from the Associated Collegiate Press. The No. 1 place went to Southwestern College in Chula Vista, Calif. Second was North Idaho College from Coeur d’Alene, Idaho. Third was Washtenaw Comm. College in Ann Arbor, Mich. Fourth place went to Contra Costa college from San Pablo, Calif., and fifth place was Tarrant County College in Hurst, Texas. The current Crusader editor, Heidy Molina, said, “I feel that the [Best of Show] award shows that the staff I have this year is really great and works hard. I’m so glad to have such a talented staff.” Last year’s co-editors Alfredo Anaya and Dana Loewen were thrilled about the Pacemaker Finalist. “It makes me happy to see that all the work that Dana and I put in paid off,” Anaya said. “It reflects through the award.” “I really felt like Alfredo and I had the opportunity to really make it our own and take chances,” Loewen said. “I think that’s what grabbed the attention of the judges.”