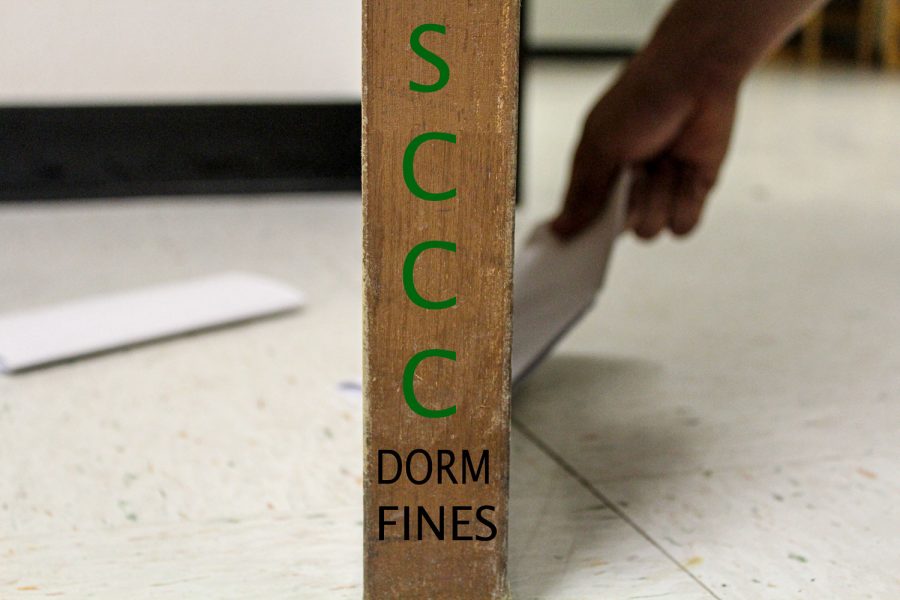 Spring semester has brought in new classes, snow and what the SCCC students are mostly confused about: Dorm fines.

A car pulls up to the Seward County Community College Student Living Center containing three students. They’re arriving back from a weekend trip to Wichita where they visited family.

The three girls walked into the building, up the stairs and into a single room. The time was approximately 40 to 50 minutes after midnight. Only two of the girls were residents of the SLC, one was not.

Quickly a door shuts, leaving the two residents in the cold room by themselves. The non-resident urgently needed to use the restroom. It was the only reason she entered the dorm in the first place.

The toilet flushed, and the door opened, reuniting the three girls to say their goodbyes before heading to bed for Monday morning. The non-resident made sure to leave the SLC after her pit stop.

Everything seemed normal for two days after this occurrence. The residents continued with their normal schedules until Jan. 29 came, which brought bad news and confusion for the two students.

One resident noticed that a white piece of paper was slid under the wooden door of their dorm.

This piece of paper was a dorm fine that stated the resident broke the curfew policy by allowing her friend into her dorm past midnight. Later, the other resident involved received the same fine.

Although this was both of the girls’ first offense for the semester, a fine of $75 was added to their account balances.

The offense was considered a visitation violation, not an overnight stay violation because it was an hour after curfew. The girls should not have been fined $75, but given an hour of community service, according to the fine guideline.

This is one of the many stories shared by concerned SCCC students underlining the hot topic of the past week:

Understanding how SLC rules can change

It has been stated by many residents that a specific policy about overnight stays has been changed from the previous policy by student housing director, Jennifer Malin. Guests of residents are not able to stay overnight anymore and curfew has been changed to midnight for weekdays and weekends. The fine for this was set at $75.

Celeste Donovan, vice president of student services, has been made aware of complaints from students about these new rules and various dorm fines. However, she was never part of the decision to introduce new rules.

Donovan did say that Malin is allowed to create new rules at the SLC, as long as they are considered fair.

The new policy was presented to residents on a green slip when they checked back into the SLC for the spring semester. However, these policies have not been updated in the student housing handbook. Donovan has confirmed that when the handbook is rewritten, these rules will be implemented.

At the beginning of the semester, dorm rules are established in the handbook in order to keep order at the SLC. At the end of the semester, the SCCC staff usually gathers 25 students who stay at the SLC to ask them what they believe should be reinforced next year or what should be changed.

Additionally, the SCCC staff has regular board meetings throughout the year about the activities and behavior that are exhibited at the SLC.

Another instance where a student was confused about the new dorm rules occured when freshman cheerleader and non SLC resident Maria Salazar was confronted about visiting her friends at their dorm.

“A letter was sent to my cheer coach about how I am no longer allowed to stay at the dorms with my friends because I broke the rules, which I always make sure to follow,” Salazar said. “I was very upset and confused since I don’t recall staying past curfew on any night, disrespecting any staff, or staying overnight since the new policy was created.”

Salazar’s friend, freshman cheerleader Yamilex Perez, said she has been fined three times so far for the fall and spring semesters. These fines were given because Perez stayed in someone’s room past curfew and shot a nerf gun in the SLC. However, she received no fines for her friend who was trespassed, or banned from the SLC.

Donovan said that she cannot confirm or deny information about the fines given because of students’ privacies.

Perez said she was not spoken to directly about the incident concerning Salazar, which she found unfair and made her wish that communication was improved.

Some resident assistants have contradicting views about the dorm fines and rules in general for the SLC.

Kami Acevedo, sophomore psychology major said that students should read the handbook for rules and regulations.

“I feel like RA’s are too lenient sometimes because we give too many warnings. It is the second semester, and I should not have to repeat myself to be quiet and be respectful to others living at the SLC,” Acevedo said. “The students need to learn the rules and obey them. We read them the rules when they move in and then again at the housing meeting.”

However, an anonymous RA on campus expressed her stance of the fines being too excessive and for the wrong things.

“Fines are given out for anything and everything and are being given out as threats to the people living here, especially if Jenn doesn’t like you,” the RA said.

Many students have stressed their opinion of the dorm fines even if they did not receive one and have their own stories about the dorm fines whether they live in the SLC or not.

Freshman nursing major Austin Moreno has not received any fines so far, but thinks it is “unfair and ridiculous. We never signed any sort of paper at the beginning for these rules.”

Since Crusader News talked to Donovan Wednesday, she and Malin met Thursday afternoon to discuss new rules and fines at the SLC.

Donovan said the green slip regarding the overnight guests rule had to be done due to the amount of problems housing staff had last semester. Additionally, the $75 dorm fees were a combination of overnight guest and curfew rules being broken, however, Donovan and Malin have agreed to keep the fines at $50.

“A student staying until 4 in the morning should be considered an overnight stay, not breaking curfew, so we are no longer charging for both rules being broken, just the overnight stay,” Donovan said.

With this being said, Crusader News has received proof from a student that the $75 fine prices were indeed charged wrongly. A student from last semester has a receipt from a $50 fine they received when they violated both the visitation hours and the overnight guest policy.

If a student receives a fine and is concerned with the reasoning, they are free to appeal it to Donovan with a letter of appeal.

“We always want to make sure we are being fair to students and giving them a chance to say their part of the story,” Donovan said. “First hand communication between students about the fines would be ideal to not have any confusion in the future.”

Malin was repeatedly contacted by Crusader News and finally postponed a scheduled phone call for further comment on the matter. She decided to take time next week to discuss what has been said by students.

Below are housing rules to remember. New rules have not been updated in the SLC housing handbook since Crusader News’ initial inquiries.

*Names of students have been kept anonymous for protection against fines.