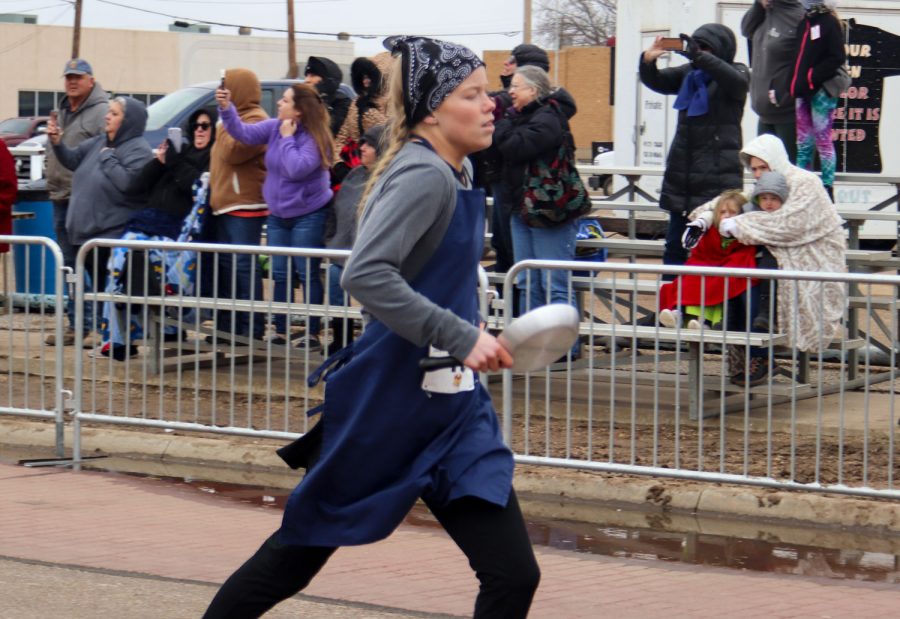 Whitney Hay placed first in the Liberal leg of the Pancake Day race, but lost to Olney, England by three seconds.

The Pancake Day race tradition carried for 71 years brings the two sister cities together every year right before Lent. Since 1950, Liberal and Olney, England have had an annual race-off on every “Fat Tuesday.” Pancake Day this year was a four day event here in Liberal, consisting of a carnival, a 5k fun-run, a eating contest, a breakfast and a race.

Training for the race

This year, Whitney Hay, sophomore accounting major, took her chances and signed up for the annual race. Her roommate, Alicyn Carey, 19, convinced Hay to sign up with her. Hay was very doubtful of signing-up and even the race.

“Alicyn was trying to convince me, and at first, I was not for it. But after thinking about it, I had nothing to lose,” Hay said.

Hay immediately began her journey up to the race by being consistent with her workouts. Hay’s preparation consisted of one mile runs, whether it be outside or on her treadmill, stretching before bed and staying hydrated. Hay said she just hoped to have fun, whether she won or not!

Hay and Carey raced the Pancake Day Race lap a week before the race, hoping to get a taste of what it would be like that day. Hay took off on the identical lap and studied the lap from start to finish. She lays on the floor after running 415 feet, and tries to catch her breath in freezing temperatures. “I might just throw myself on the floor after the race!” said Hay, while laying down on the sidewalk next to the finish line of the race.

At 5:45 a.m. on the morning of Feb. 25, Hay woke up and knew exactly what day it was. She had a little morning run on her treadmill, and began to braid her hair. She threw her joggers, shirt, skirt, shoes, and lastly her apron and bandana on. She attended the Pancake Day breakfast and ate two sausages, one pancake, and drank about four cups of water. She also stretched one last time before the race.

After breakfast, Hay, Carey, and the rest of the racers were asked to meet at Faith Tabernacle Church at 11 in the morning. With little time to spare, Hay ran two blocks, up and down, to warm up.

Before the race starts, the ladies are asked to flip their pancake once, and as soon as the pancake hits the pan, a horn goes off! The ladies sprinted as fast as they could, faces burning red with the cold wind and snow coming down.

Hay had a plan to win this race. Stay in the top four and at the last turn of the race, kick into full beast mode. Rodney Hays, Whitney’s dad, screams in the distance, “COME ON WHITNEY, PICK UP YOUR KNEES!” Whitney only remembers hearing her dad the last half of the race.

The ladies turned into the last stretch, and Hay followed through with her plan, as she picked up her speed. The crowd got rowdy, as it was certain Hay was going to win. She crossed the finish line first, flipped her pancake one more time, tried catching her breath, and was immediately swarmed by friends, family and the press.

“Whitney! How does it feel?” the press immediately asked. Hay’s face was burning red and she had trouble catching her breath because of the low temperatures. “It feels great to take part in this tradition, and it feels even better winning it.”

She was crowned and declared winner of the 71st Liberal Pancake Race. Maria Alba, first runner-up, and Mikalya Knudsen, second runner-up, are also declared besides Hay. Crowns were placed by Ms. Kansas U.S.A. and Ms. Teen Kansas U.S.A. Hay is also given a cloak to wear to the Shrove service at First United Methodist Church. Another tradition Hay got to take part in is the kiss from the vice-mayor, Taylor Harden, at the footsteps of the Church.

After the mass, Hay, Harden, and the Pancake Day Board of Directors Skyped Olney, England. Every one greets each other, and the two winners, Hay and Godof, are able to converse for a while. Mother and marathon runner Godof, yelled and screams out of joy after times are revealed. This is the first time in three years Olney has won the International Race.

After an eventful day, Crusader got to sit with Hay in her home. “I knew the weather was going to be brutal, and I was going to be dead at the end of the race,” Hay said. She ran on Pancake Day at the age of nine, and thought it was time for her to run again. “I love my town and our traditions, and I wanted to be part of it at least once,” she added.

Hay felt relieved after the race and was most excited to finally be able to drink Dr. Pepper after weeks of training. She was glad she showed some fight and was able to experience it all. “It’s a cool thing to say in the future, like I am Liberal Pancake Day winner of 2020!”

Hay was gifted bottles, body products, gift cards, etc., from local business. She was also given a silver plated tray with “1st Place in Pancake Day Race 2020” engraved at the center.