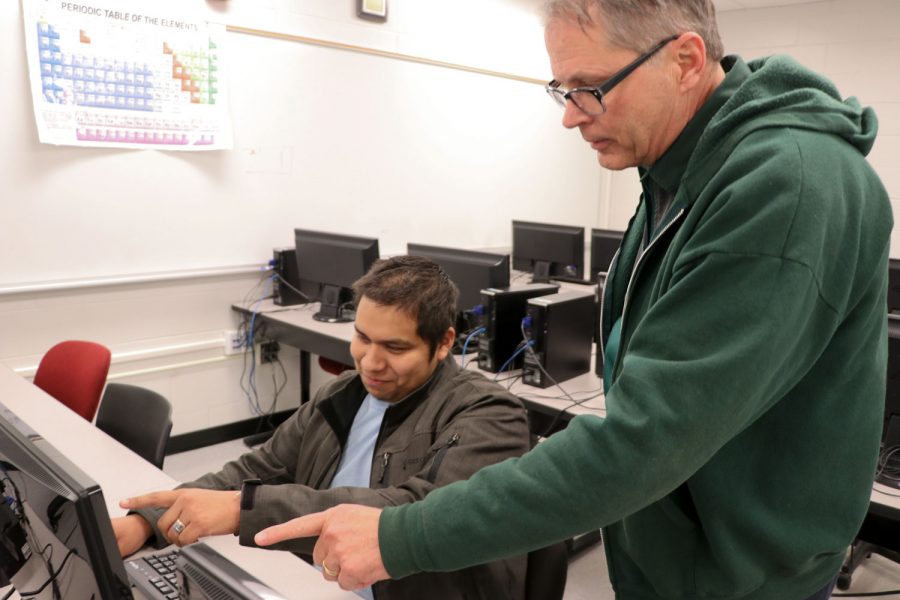 In the computer room, Chris Hickman helps a student with an assignment, explaining the process and answering questions. The new dean makes sure each one of his students gets the help they need.

U.S. Navy veteran, Chris Hickman, grew up in the small town of Wauchula, Florida. Somehow, after many years of running from his confined hometown and living in different places nation-wide, he ended up in Liberal. Hickman never imagined his life taking a turn like that. The story goes like this:

One day after work, Hickman’s wife decided to find him a new job. They were living in Colorado and she was tired of him working 70 hours a week.

“It’s in Liberal, Kansas,” she answered.

Hickman said no in many ways, but still took the job. Eventually, this resulted in deep connections to students by teaching future technicians.

Liberal is small like Wauchula, and to his surprise, the veteran took a liking to the peaceful streets, landing a job at Seward County Community College as a process technology professor.

After nine years of teaching process technology, Hickman has been appointed dean of the industrial technology school.

“As a board, we all collectively decided that Hickman should get this position because of the dedication and time he has put into the tech school. He has taught here several years and shows great compassion for his students,” Joe McCann, vice president of academic affairs, said.

After this semester, Hickman will no longer be teaching, but advising professors and seeing over them. Hickman said that this is not his first time in a leadership role, as he has advised technicians before in his profession.

Hickman joined the Navy when he was 17 years old and started out working on diesel engines, where he was a machinist mate on the ship. He spent nine years on active duty and 12 years on reserve.

“I feel like the Navy really shaped me into who I am because of the discipline and hard work I went through. I joined when I was 17, so they basically raised me in a way. The most difficult part was growing up,” Hickman said.

Hickman originally wanted to join the Coast Guard, but it was too far from where he lived so he, “called the Navy recruiter and he said ‘stand outside your door, I’ll pick you up tonight!’ So I joined the Navy instead,” he said, laughing.

Hickman spent part of his time in the Navy working on submarines in Connecticut. During his active duty, he went to Charleston, South Carolina and worked for the National Oceanic and Atmospheric Administration, where he started on his big first project, an omega fish oil company, the first fish oil factory ever made in the United States. Hickman worked with N.O.A for 11 years before deciding to move to Colorado with his wife.

Hickman met his wife through a pen pal club.

“She wrote me first, I really never wrote anyone. But she moved to the United States in her 20s, lucky for me, and it worked out for us. It’s not a way I advise meeting someone, though. We have been married for 30 years,” Hickman said.

When Hickman isn’t with his wife, he enjoys working on a project for Mechatronics. It has evolved into automation and robotics, but he said due to his new job, he has to take a break from it.

For the future, Hickman said he is most excited about helping the school make changes with technology classes. Having a background in automation really helps the instructor, as he has experienced how the world is always changing with technology, especially with automation.

Hickman’s students seemed to have made a connection with him, deeper than just education. His favorite part about teaching and what he said he will miss the most is how it affects people in the long term.

“Students still keep in touch with me. A fella I taught just got a job with Coke, and that was his plan from the beginning but after four months, they did reach out to him, so he texted me about it,” Hickman said. “That same day, I had a student visit from Kansas City. He was an HVAC technician student and he stopped by on his way back to make connections and revisit. It’s not a rare occurrence when that happens.”

Other students like Irvin Gaspar, an HVAC second-year student, said he really appreciates the way he tries to have a connection with him and his peers. “He always makes time for a one on one lecture if you have trouble understanding something, and he checks up on you as well if your grade drops,” Gaspar said. “He’s an overall great teacher and is an expert in what he teaches so it makes it better for us.”

Hickman will continue to teach throughout the semester but will retire to start his full-time job as dean of the tech school, opening a new chapter in his life.