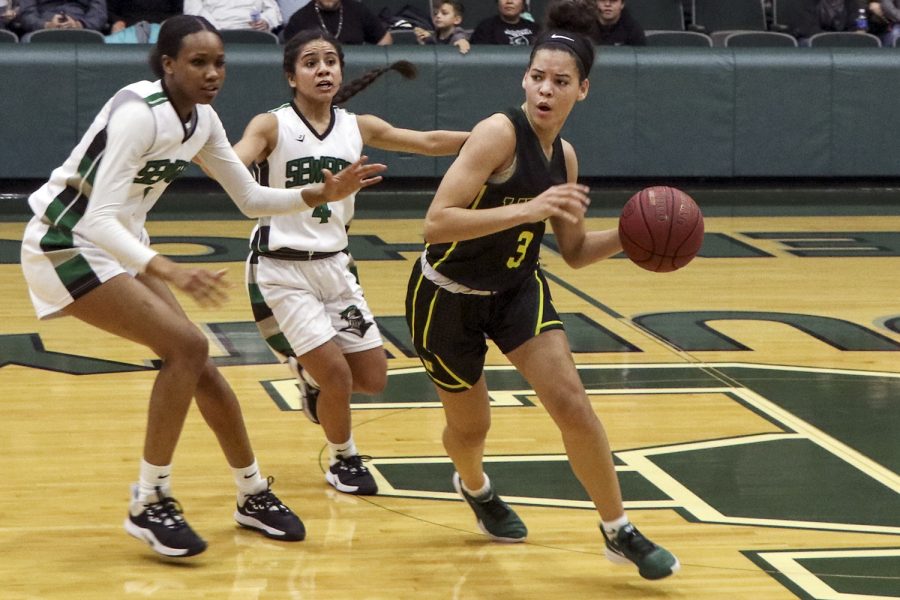 Ayanna Smith and Kamy Perez are on defense trying to get the ball back. (file photo)

The Lady Saints Basketball team was unable to overcome a slow start against Butler Community College despite have many changes. Seward lost 70-65 in the semi-final matchup of the Region VI Women’s Basketball tournament.
The Lady Saints struggled in the opening quarter and watched Butler race out to an early 17-4 lead. Seward was able to get something going toward the end after a bucket by Alanis Hill but trailed 24-12.
The start of the second quarter was almost a repeat as Butler took their largest lead of the game of 16 points. Destiny Alston hit a big three and the Lady Saints seemed to find their groove. They settled in defensively, only giving up 6 points the rest of the quarter. The Lady Saints brought the game within five points after a Karolina Szdlowska steal. The teams went into halftime with a score of 34-29.
Seward came back to the floor and struggled once again on the offensive end,. They made five turnovers in the first five minutes of the quarter. Butler capitalized and built the lead up to 15. After a quick timeout, the Lady Saints responded with a steal on the next possession, Gina Ballesteros nailed a corner three to give Seward some life at 47-35.

The Lady Saints looked to come back to life and closed the gap. Over the next five minutes, the teams traded baskets. Seward turned up their defense and forced three turnovers, leading to back-to-back jumpers by Alanis Hill to keep Seward within striking distance at 65-61.  Seward could not get over the hump. They missed four free-throws in the final 90 seconds while Butler was able to maintain their two-possession advantage, eventually beating Seward 70-65.

Alanis Hill led the way for the Lady Saints with 15 points. Leilani Augmon provided a double-double with 11 points and 10 rebounds.

The loss moves Seward to 25-7 on the season. Next up is waiting to see if they will receive an at-large bid by the NJCAA selection committee to continue their season.