Democratic race down to two candidates 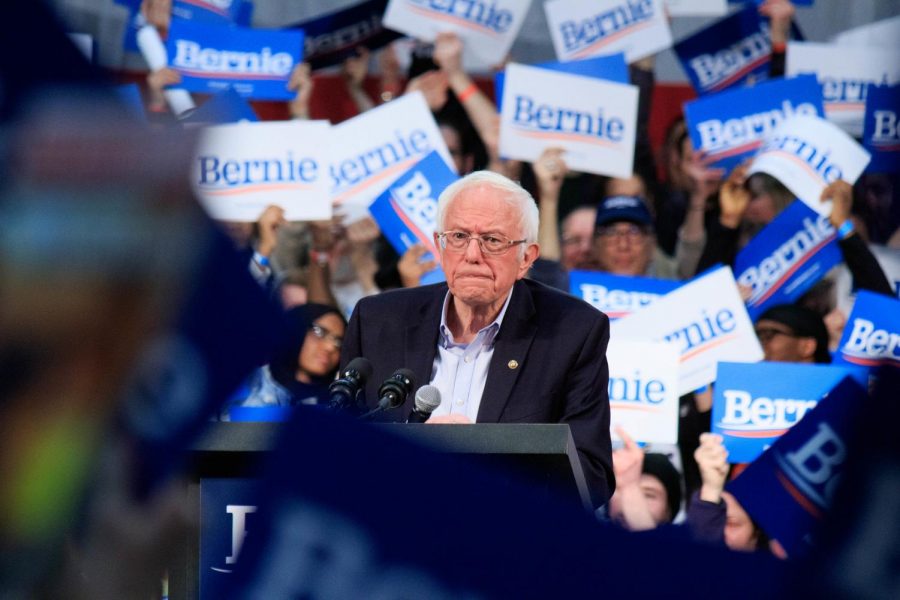 Sen. Bernie Sanders (D-VT) holds a rally hours before Super Tuesday at the Rivercentre in St. Paul, MN, on March 2, 2020.

It was down to three. Two opponents were neck and neck and one is not going down without a fight. With twists and turns and the plot thickening, some would consider this a drama series, but in fact this is the 2020 United States democratic presidential primary election.

All of these candidates, excluding Warren, did not only drop the race but threw their support to new front runner, Joe Biden.

The results from Super Tuesday were not what many politically enthused people thought the outcome would be. Biden has a majority win of 10 of the 14 states, where Sen. Bernie Sanders only picked up four states. As of right now, these results leave Biden with 596 delegates, just 65 more than Sen. Sanders.

Many different opinions arose about Super Tuesday from people watching the news channels, but the main discussions happened on Twitter.

Students at Seward County Community College seem to have mixed emotions about the current politics on social media.

“I’m not an avid user of twitter to be honest… I’d say I’m more neutral about what trends on Twitter but at the same time I find something like Super Tuesday trending a little more interesting topic than stuff like celebrity drama or something,” Ana Herrera, sophomore behavioral science major, said.

However others would rather not see politics from supporters at all on their feed.

“I don’t mind seeing politics if it is breaking news from a news site, but other than that I scroll past all of the politics that involve the candidate’s supporters trash talking to each other. I don’t care for all of that screw Bernie or screw Trump stuff,” Cacee Milburn , freshman science major, said.

Twitter has highlighted the many discussions and arguments of the day after Super Tuesday. Hashtags like #BernieOrBust2020, #WarrenDropOut are included in the arguments. Some that push against Biden and the President of the United States, Donald Trump with #IDoNotLikeJoeBiden  and #MakeTrumpNervousIn4Words were also used.

Points were discussed about the top three runners for the nomination, but a general idea stood out for each candidate’s supporters. Twitter users think that Biden supporters showed up to the polls to push him ahead and believe that he is the best option to beat President Trump. Others aren’t sure if Biden can remember where he is at due to his dementia-like actions.

“Big day for Joe Biden. We can do this. Trump must be defeated. #supertuesday2020 #BidenForPresident,” twitter user @Goss30Goss tweeted. This opinion was followed by many other Biden supporters’ tweets.

Many of Sanders supporters think the primary is rigged and that the Democratic National Committee will not let a candidate like Sanders thrive. However many others think Sanders’ loss is needed.

Warren supporters thought that she should have continued in the race, even though she did not gain high numbers of delegates or win a majority of any state. While others believe that if she stands for a progressive movement, it was necessary to not steal votes from Sanders anymore, suggesting it is positive for her democratic race dropout.

“I want so badly for Warren to prove me right against the Snake Emoji people. She must drop out now and endorse Bernie the progressive movement is her priority. #WarrenDropOut,” tweeted by twitter user @keithburgun.

“What the @BernieSanders campaign don’t realize is that they just can’t bully people into embracing their views. They trash everyone else who holds a different opinion and they wonder why he crashed and Bern’d? Warren Democrat (flag emoji). #NeverBernie #WarrenDemocrat,” user @ReBIReine posted on her feed.

Even President Trump was able to get in his own words about the democratic race for the nomination, while he is easily winning every Republican primary when they are not canceled.

“Mini Mike Bloomberg just “quit” the race for President. I could have told him long ago that he didn’t have what it takes, and he would have saved himself a billion dollars, the real cost. Now he will pour money into Sleepy Joe’s campaign, hoping to save face. It won’t work!” Trump tweets soon after Bloomberg’s dropout announcement.

The opinion on politics and more specifically, which democratic candidate can beat President Trump came together on social media to show the unity of some supporters and the spitefulness of others.

With Super Tuesday out of the way, many questions are asked while people wait to see what the four democratic candidates next moves are. Many wait to see if Warren will endorse Sanders or Biden as politics is trending number one again on Twitter.

Biden, Sanders and Tulsi Gabbard as of now are expected to all compete against each other at the Michigan Democratic primary, scheduled for March 10.

The next debate will follow five days after on March 15, with a pending debate stage roster.