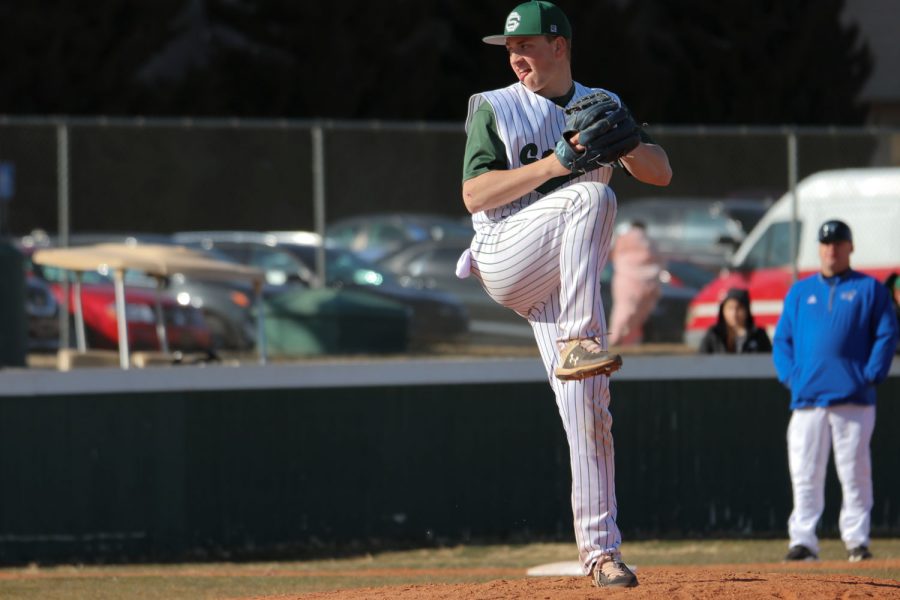 Evan Truelson, North Riddgeville, Ohio, winds up before releasing a pitch in a March 7 game against Cloud County Community College. The redshirt freshman pitched in 11 games before the season was canceled due to the COVID-19 outbreak. He split time between pitching and playing first base before all activities at Seward County Community College were canceled.

The National Junior College Association made the difficult decision to cancel all spring athletics, along with the upcoming national tournaments due to Covid-19, the Coronavirus. The March 16 decision was the last athletic association to cancel after the Centers for Disease Control and Prevention (CDC) announced they recommend gatherings to stay below 50 people.

This closure means there will be no more SCCC spring sports — baseball, softball or tennis —  nor will the women’s basketball team go to the national tournament. Coaches and athletes admitted they are saddened by losing their season but support the decision.

“While everyone is disappointed in the current status of our spring seasons, what is happening in our country and across the world is much bigger than sports. These decisions have not been made lightly and have been made with not just the overall public’s safety, but all of our athletes, coaches, officials and support staff’s safety in mind as well,” Ryan Wondrasek, SCCC head softball coach, said.

For freshman basketball forward, Wiktoria Kazimierowicz, this was heartbreaking, but something she knew was much bigger than just NJCAA.

“When we first got to know that our national tournament was moved to April 20, I was happy because I knew that we would have more time to prepare for the tournament,” she said, noting that the Lady Saints were an at-large team in the tournament.

The freshman wasn’t that surprised, however, when the tournament was canceled just days later.

“I’m from Poland and I watched how Coronavirus is spreading in Europe, I was receiving texts from my basketball friends that their season got canceled and then it was just like a snowball. All events and games were canceled in Europe and the NBA,” Kazimierowicz said. “As a team, we think this is crazy and unreal.”

There are still many questions surrounding how the canceling of seasons will play out. The main being: if athletes will forfeit this year of sports eligibility and lose one of their four short seasons.

Dan Artamenko, SCCC Athletic Director, confirmed that all athletes of spring sports (baseball, softball, and tennis) will not be charged with a year of eligibility.  They will still have four seasons to play.

“The issue becomes how will they use those seasons. If they want to use two of them at Seward County, they would have to go to school for three years here,” Artamenko explained. “Many might have to transfer next year and then use three seasons at their four year school.  Their last season, they might have to take extra classes after they graduate.”

Deciding whether or not to use that third season of eligibility at Seward or a four-year university is a difficult one, especially when most sophomore athletes were looking forward to their last season at SCCC. Many make decisions on where to transfer and earn scholarships based on their sophomore stats and team play. The cancelation of the season will create some difficult decisions for sophomore athletes.

“Many of our sophomores were relying on the season to be recruited and choose which school they wanted to transfer to,” Artamenko said. “Now, they might not be able to receive a scholarship and will have to decide where to go to school without ever visiting.”

For international students, there are even more questions and worry. Some may not get to return to their home countries as the SLC empties and students return home.

“In Poland, the cities are empty so the virus is not spread out. Also, my cousin is stuck in the Philippines. He will probably stay for the next month because flights are canceled,” Kazimierowicz, a Poland native, stressed.

While coronavirus has affected the spring seasons, there is one thing all SCCC athletes, coaches and directors agreed on: “This is much bigger than just cancelling spring sports.”

“Athletics is such a small piece of what is going on,” Artamenko stressed. “My wife is a nurse in the Emergency Room and her bad days are much different than what we [SCCC Athletics] are dealing with.”

As the closures of schools, athletics, businesses and even restaurants happen all over the world, Wondrasek stressed that these decisions were not made lightly.

“They have been made with not just the overall public’s safety, but all of our athletes, coaches, officials and support staff’s safety in mind as well,” Wondrasek said.