All-Kansas, journalist of the year 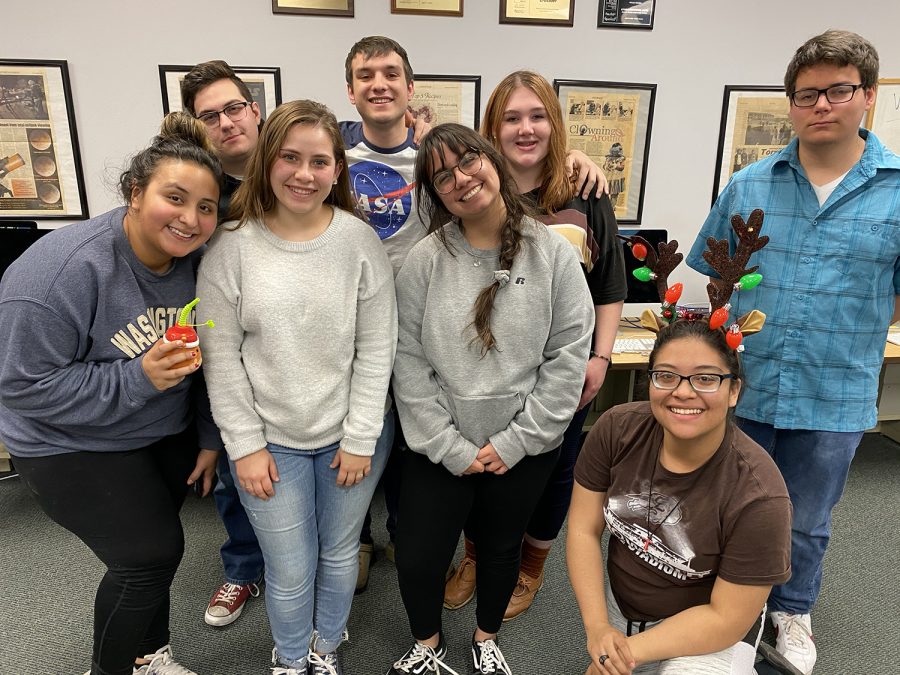 Despite not being able to attend the State Conference in person, the Crusader News team conquered the Kansas Collegiate Media contest, coming home with all of the top awards for two year colleges.

Crusader News was given the title All-Kansas news publication of the year among two year colleges. This is the top award given to a publication and is the second year in a row that the staff has won the honor. The website also won a gold ranking.

The staff swept the Journalist of the Year contest for two-year schools, having the top three journalists in the state. Annette Meza was named Journalist of the Year. The sophomore mass communications major also earned seven other individual awards. Sophomore English major Cheyenne Miller earned first runner up honors in the JOY contest while Calen Moore, sophomore mass communications major, was named second runner up.

Annette Meza is a sophomore mass communications major. She was named two year college Journalist of the Year. Cheyenne Miller was the first runner-up and Calen Moore was the second runner-up.

All three said they were surprised to get the text that they were named the top three two year journalists in the state. The three finalists were at a loss for words.

“Honestly it feels insane,” Meza said. “I had no idea that I would win an award as significant as this one, but it honestly feels incredibly rewarding.

“I’ve worked really hard to make Crusader News the newspaper it is today as managing editor, and so has the staff,” she added. “I’m just proud of myself for achieving something I told myself I wanted.”

Miller expressed her shock for earning runner-up, but had no surprise Meza was the winner of JOY.

“I’m not entirely sure how Crusader managed to sweep the JOY placements, but I know that Annette’s win was well deserved,” Miller explained. “She works incredibly hard to maintain the website and guide the staff, often with little help. The way I see it, if any one of us was going to win, it was always going to be Annette–she does more for the newspaper than anyone, really.”

The Crusader staff as a whole raked in 33 individual awards as part of the contest. Moore took home 11 awards in everything from best audio story to best photo essay in the state. The top three journalists swept the feature writing category, winning all four awards.

“I just assumed that there’s so much better writers out there and I was happy to lose two members of my staff who I’ve grown with as a writer and seen them develop as two of the most talented journalists I know,” Moore said.

Photography students also nabbed the top three spots for photo essays among all-schools. This means all colleges in the state of Kansas, no matter the size. The photographers also swept the two-year college category for news photography, winning all three top spots.

While the Crusader staff itself worked very hard for their win, they didn’t do it alone. They were held together by their “glue,” adviser Sue Sprenkle.

“…I think the results have a lot to do with how hard and how far our adviser pushes us past our comfort zones,” Miller added. “Her expectations of us as individuals seem to rise consistently and we often have no choice but to meet them.”

With the Conference going fully online, contestants were unable to accept their awards in person. The awards were announced via an email to advisers over Easter weekend. Sprenkle then texted the good news to staff.

If the staff had been together to hear the announcement, Meza said she would’ve given thanks.

“I would have thanked the whole Crusader team for putting in the work to create awesome stories, I would have thanked Preston Burrows, my amazing and hard working co-editor for his help this whole year and for being a supportive friend,” she said. “And lastly, I would love to thank Sue for everything she’s done for me and my classmates. For teaching us how to follow through with an idea in such creative and amazing ways and for basically being the glue that holds us all together. I know without her support and knowledge I wouldn’t be where I am now.”

A list of all awards earned by the Crusader staff are as follows: (Material must have been published between February 2019 and February 2020)

Journalist of the Year – Annette Meza

All School Competition (compete against two and four year schools)

Honorable Mention – Crusader Staff – What can you buy on a $5 budget?