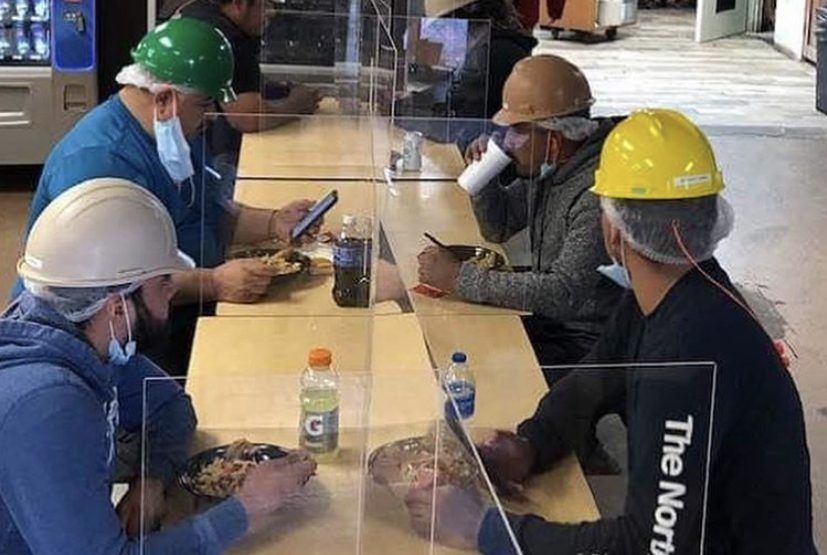 Employees at National Beef in Liberal feel safer and more protected now that cubicles of plexi glass have been placed around the plant.

As the number of cases rise in Liberal, now up to 195, places of work try to make their environments as safe as they can for employees. National Beef, the largest place of employment for Liberal, was in dire need of any sort of protection for their employees from the novel COVID-19 virus.

Work conditions  have so many people together at once. Joaquin Urias, project manager for National Beef in Liberal reached out to Ken Trzaska, president of Seward County Community College, for help. A way to social distance was an urgent need for the local plant.

As COVID-19 panic spread through the plant, Urias and his team were trying to think outside the box to protect employees. Management prepared the plant with hand sanitizers and more preventative measures but it was not enough as COVID-19 hit the town.

Urias ordered plexiglass to be set up at the various stations within the plant. He didn’t really have a way to cut it except by hand. When he heard SCCC had a water jet machine which cuts materials such as metal or plastic with strong force, he made a call and the college’s industrial technical school came to the rescue.

“I met up with Butch (Garst), the machine tools instructor, and he was happy to help,” Urias said. “If he didn’t work so quickly, it probably would have taken me a week to cut all the pieces myself by hand, so I’m super happy that they were able to do it.”

Butch Garst, machines tool instructor, said he believes it’s important for the college to step up and help when and where they’re needed.

The material was dropped off April 9 before the Easter break. The tech school began cutting the pieces on Friday morning and worked through Saturday. The glass was finished by Monday afternoon.

The glass has been placed in multiple areas of the plant such as the cafeteria, Human Resource departments and insurance offices. Mainly areas where many people go in and out of.

Adrian Mendoza, sophomore accounting major and National Beef employee, was able to tell a difference in the attitudes of his co-workers.

“I’ve noticed a lot of people feel more comfortable with it now. Before we had them, people began to distance themselves more and spread out while sitting, but now that they got the plexiglass, they began to sit close to one another and now we’re able to interact with each other,” Mendoza said.

Each person has their own cubicle when they go on lunch break and are now able to interact with ease. Urias mentioned how multiple employees have given him a thumbs up for the idea. The tech school cut approximately 310 pieces of glass.