Freshmen sells and breeds birds from her home 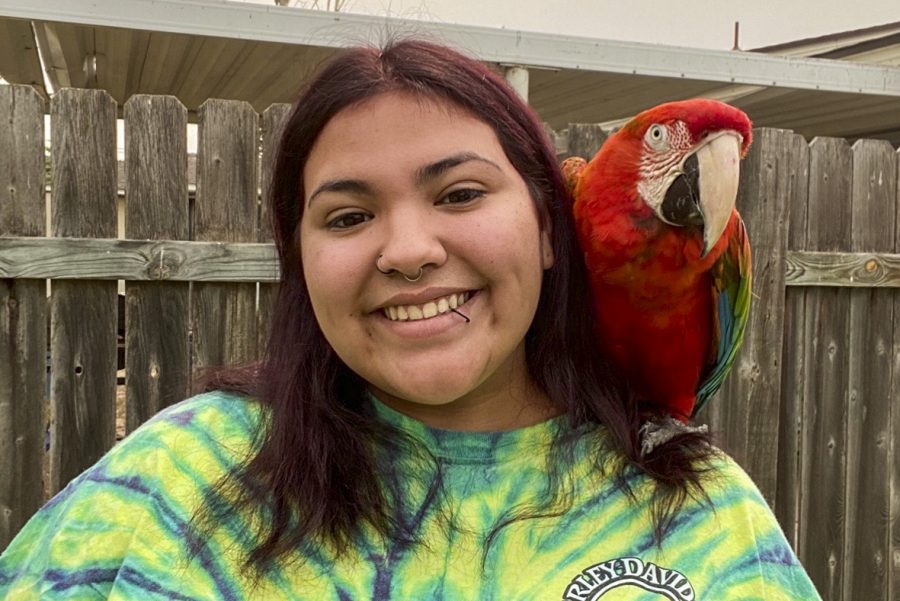 Breighanna Medina poses with her flame macaw. She considers this bird her "therapy" pet. It helps to soothe and calm her down. Medina has many pet birds that she cares for with her family.

When most people think of household pets, dogs and cats are common pets that come to mind, but most people wouldn’t think of birds as pets. That’s where Breighanna Medina comes in, the business major breeds and sells cockatiels along with her grandmother straight from their house.

“I have about 62 birds, about 25-30 are of them are just personal birds like pets, and the rest are breeders,” Medina said. “What we mostly breed are cockatiels, because those are the easiest to breed and they don’t take a lot of work to care for.”

They didn’t always own the flock of birds. Medina’s grandmother used to run a shop on the corner of Second and Western with fellow bird enthusiast Jackie Rice. When Jackie’s husband died, along with the death of Medina’s mother, the shop shut down. And after Jackie moved to an apartment that didn’t allow pets, Medina’s grandmother adopted her birds.

“That’s where a lot of the personal birds come from, they were Jackie’s [but] now they’re ours because she had ended up moving into an apartment that didn’t allow animals.”

But they weren’t just doing a favor for a friend, after Medina lost her mother three years ago, the birds became a source for therapy.

“You know how people have their emotional support dogs or cats… mine is a bird, it’s a flame macaw. It’s kind of like any animal, you become attached and [the birds] become attached to you.”

Medina swore the birds act as emotional support, because they do sense when you’re upset. Her bird knows if she gets frustrated

“I kind of start getting red and I start tensing up and I get a crack in my voice,” Medina explained. “she’ll know and she’ll come and sit there and take to me… she’ll do whatever she can to try and calm me down and if anybody comes near me, she’ll try and bite them”

Medina noted the birds can be just as comforting as fluffy dogs and cats. They respond to their owners and create deep connections with them.

Although they own about 30 birds as personal pets, Medina and her grandmother also raise and breed cockatiels to sell. They focus on selling cockatiels since they’re low maintenance. Medina mentioned that a common mistake buyers make when purchasing cockatiels is thinking they’re all the same price.

“When we do sell, it just depends on the cockatiel. We have pearl pied, yellow cheeks, red cheeks—there’s just different subcategories, so it could range anywhere $100 to about $500 just depending on the type of bird,” Medina said. “And that’s kind of crazy because these little birds are like you know not very big, so it’s crazy because people come in thinking oh, I can get this really cool looking one for $150, $200 whatever, we’re like no, that’s actually a $350 bird and they’re like no way, I’m not paying that.”

Breighanna Medina has a variety birds in her family’s flock of 62. These are among her favorites an some that she considers her “pets.” She swears birds can serve as therapy or support animals because they can sense your mood and your emotions. (Breighanna Medina)

Medina also noted her plan for the birds in case anything ever happens to her grandmother, because of the connections and friends she’s made in the bird community, she’d just sell the birds to her bird groomer and profit off the sales.

Throughout the years of owning and selling pet birds, the reception from Medina’s friends has been overwhelmingly positive. Medina’s friends are always trying to get her to tell everyone about the birds she owns and cares for. This usually happens during the first day of classes when everyone’s getting to know each other. Medina even recalled a time when her grandmother said her friends weren’t coming over to see her but instead were coming over to see and play with the birds.

“It’s really exciting especially because you don’t necessarily see that every day. You don’t see a big macaw on somebody’s shoulder just walking [around]. So, a lot of people are like, hey that’s kind of cool, that’s kind of crazy.”