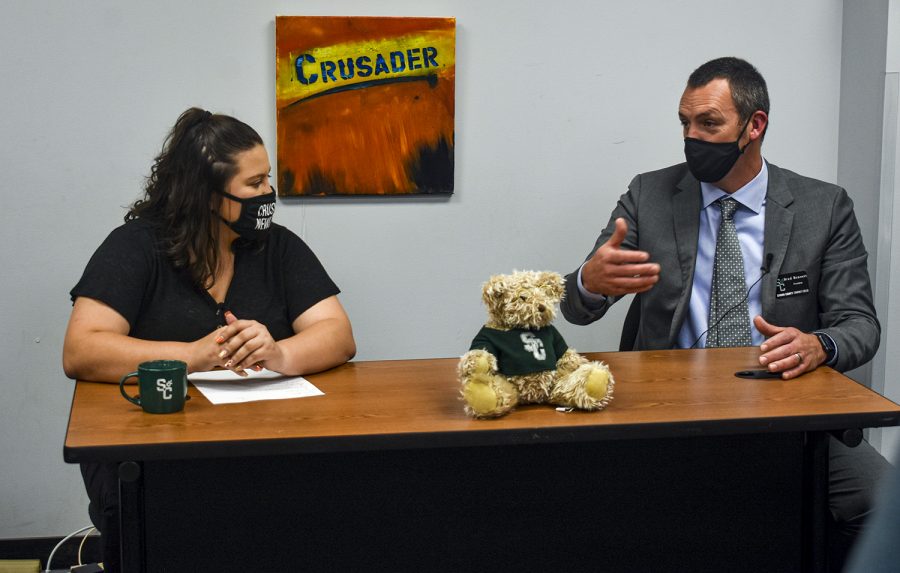 W
hen Brad Bennett finished up his work and said his goodbyes at Colby Community College , he took a picture outside of the college he had served for the last 12 years of his life. Although he never thought he would leave Colby, Bennett, along with his wife and kids, headed for Liberal. He was ready to serve Seward County Community College as the new president of the college.

Bennett grew up in Tulsa, Oklahoma. He went to college in Denver and graduated with a degree in finance. He then met his wife, and a few years later, they moved to Colby. While Bennett was living in a town east of Denver, he taught K-12 and PE courses. At Colby, Bennet ended up teaching all business courses before moving up to the position of executive vice-president of the college.

Bennett always knew he wanted to work in education, and as he focused on bettering himself, he was offered promotions. Although the idea of moving up at Colby sounded rewarding, Bennett feared he wouldn’t have the same impact on students he was able to have as an instructor at the college. He soon realized that wasn’t the case. Higher administration roles impacted students even though it may go unnoticed.

“I resisted administration a little bit at first because I was afraid I would be too far removed from the students…I realized that what we do has a huge impact on students. You just don’t see it as much,” Bennett said.

For 12 years, Bennett served the community of Colby and he never even pictured himself leaving. But when the job for president of SCCC came up, he couldn’t pass up the opportunity. Unlike some people who might apply for a job as a foot in the door for future jobs, Bennett was drawn to SCCC and how the college held academics in high regard. If it wasn’t for SCCC needing a new president, Bennett said he would likely still be working at Colby with little chance of him ever leaving.

“If it wouldn’t have worked out, I would not have applied for other jobs…I wasn’t looking for just an opportunity, I was looking for the right opportunity,” Bennett said as he expressed his admiration for SCCC.

Bennett said that he sees the buy-in and support the

“It’s important that the buy-in goes both ways…so we have that responsibility and duty to care and give back to our community and make sure we’re supporting our community,” Bennett said.

Being the president of a college, or working in any administrative job, can be taxing work, but to Bennett it’s all about loving the job. One of the things he’s an adamant supporter of is doing what you love. For him, that’s being in a position to help students and connect with the very community that makes it all possible.

“If you’re going to come to work and spend this much time, you’d better enjoy it and love it and I enjoy coming to work every single day.”