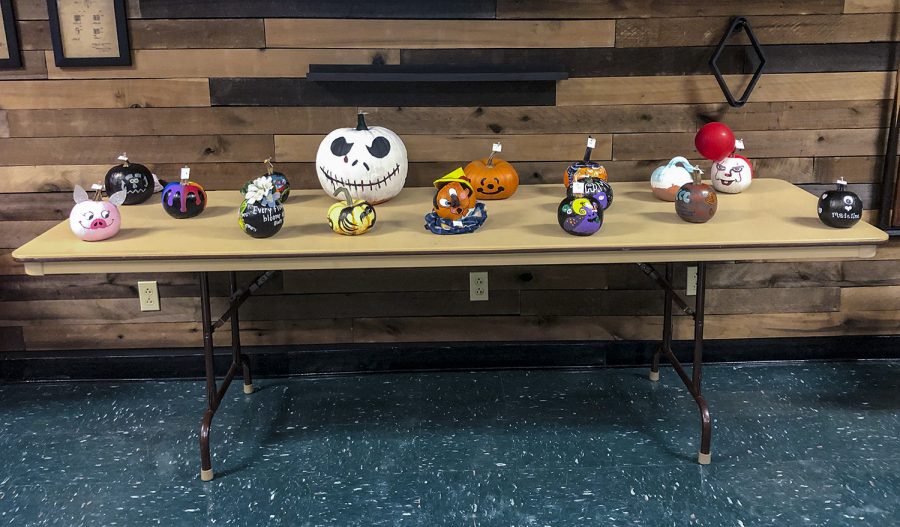 Four tables in the student union have everything needed to paint set out for students. But what are they going to paint? Pumpkins!

Wade Lyon, Seward County Community College’s director of student life and Leadership, and the Saints Bookstore set up a week’s worth of activities for students to enjoy in celebration of Halloween.

One of the activities was a pumpkin painting contest on Oct. 26. Lyon started giving out pumpkins at 9 a.m. and the students had to bring them back forjudging by 4 p.m. The Student Union was set up for students to sit down and create their pieces of art. The only problem, though, was that snow hit parts of Kansas and Oklahoma the night before. So, not many students showed up to the event and even the results were delayed in being announced.

SCCC’s campus stayed open but many students took the zoom option that day.

“There’s just something about cold days that just make you want to be lazy and stay at home,” said Aaliyah Eaton, a Sophomore majoring in Elementary Education.

Around two o’clock, there were only about four pumpkins on the table so hopes were held high on winning.

Around 3:30 pm, most of the contestants had brought in their pumpkins along with a few last minute pumpkins. The table had soon filled up and the competition had grown harder. There was a pig, Pinocchio, the Nightmare Before Christmas, and even Pennywise the clown.

Jessica Headrick, a freshman majoring in pre-dentistry, said “I decided to go with such a simple design because I’ve always liked Disney characters and I wanted to do a Mickey Mouse reincarnation.”

Headrick entered the Painting contest because she wanted a chance at winning the money.

“Any chance is better than no chance at all,” she said.

Some other activities that are being hosted the rest of the week will be down below. Today, make sure to go to the bookstore and spin the wheel to win prizes, discounts, and even get some candy. For tomorrow, the Bookstore and Student Union are hosting a carnival and costume event. There will be Pumpkin Cork Shooting, Pumpkin and Cauldron Pong, and Cornhole. Also make sure you come dressed in your very spooktacular costume to win some extra prizes!