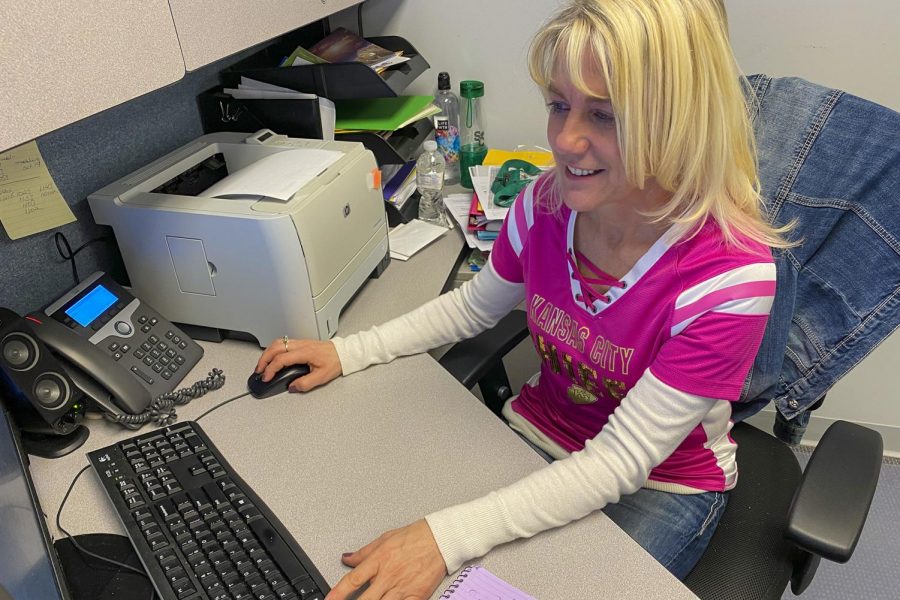 Deedee Flax, CIS instructor, shows her support for the Kansas City Chiefs on Friday. There were other sitings of Chiefs apparel all day on campus. Check out the game at 5:30 p.m. Sunday on CBS. If you live in the dorms, the SLC is having a watch party.

On Sunday, the G.O.A.T (greatest of all time) —Tom Brady— will start in his 10th super bowl as he leads the underdog Buccaneers against Patrick Mahomes and the defending super bowl champion Chiefs. It’ll be the first time the last two super bowl winning quarterbacks will face one another in the Super Bowl. It’s also the first time a Super Bowl team will have the advantage of playing in their home stadium.

Although the Bucs aren’t favored to beat the Chiefs, it wouldn’t be surprising if they upset Kansas City and upended their hopes of winning back-to-back championships.

The big matchup going into this game is whether the Bucs’ defense can slow the Chiefs’ explosive offense. One SCCC student believes the Bucs won’t be a match for Mahomes and his receivers come Sunday.

“I think the Chiefs got this, with the offensive weapons we [have], I don’t think the Bucs [will be able] to handle it,” said Charles Kendall, a freshman majoring in business administration.

It’s clear, especially living in Kansas, that most on campus will be rooting for the Chiefs to deny Brady his ring number seven on Sunday. Some think the Chiefs will blow out the Bucs like they’ve been doing to their other opponents throughout the regular season and postseason. Still, there are some fans who think it’ll be a nail biter.

“I actually think that we struggle more on the defensive side of things as far as the Chiefs are concerned,” said Dee Dee Flax, CIS instructor. “I think it’s going to be tight, I think the score is going to be very close.”

Despite her concerns on defense, Flax made sure to give a reassuring “go chiefs!”

Whether you’re a Chiefs or a Bucs fan, this year’s super bowl will provide plenty of headlines either way. Whether it be the Chiefs capturing the first back-to-back Super Bowl victories since Brady’s patriots did it in the early 2000s or Brady winning his first Super Bowl since his “divorce” with Bill Belichick and the Patriots.

Game coverage starts at 5:30 p.m., Sunday, on CBS. Student Living Center (SLC) will host a watch party for those living in the dorms.