Saints dominate Grizzlies in second half, cruise to 86-64 victory 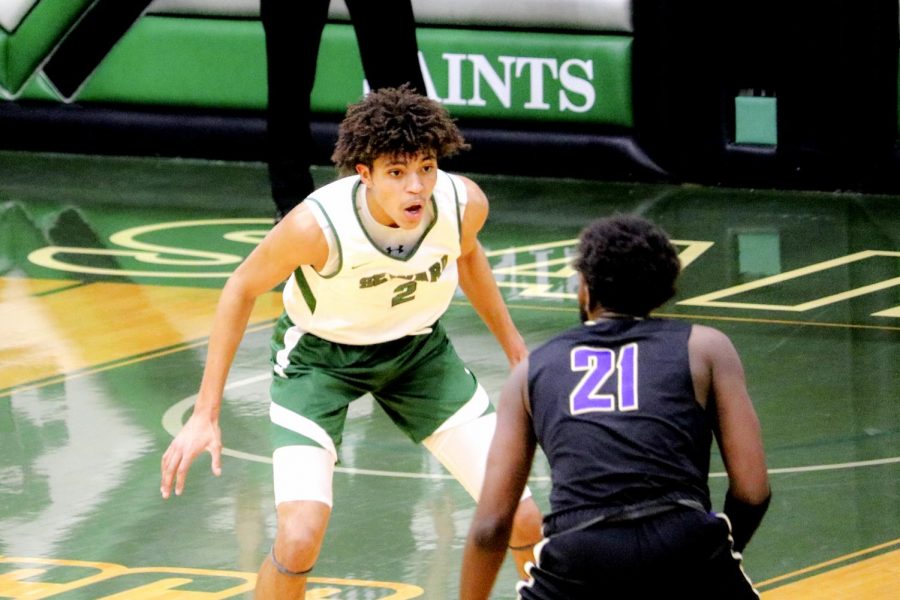 Erik Pratt sets up for defense as Butler County’s Noah Thomasson brings the ball to the wing. The freshman from Lake Worth, Florida had 10 points and a steal in the 86-64 victory over the Grizzlies.

At the start of the second half of Thursday night’s game against the Butler County Grizzlies, Saint’s forward Kevon Cooper made an impressive slam dunk that extended the Saint’s lead by 14 and set the tone for the remainder of the game. The Saints went on to win 86-64.

The 1-2 Saints entered the game desperately needing a win after losing two of their first three games this season, but they got off to a slow start trailing 6-12 a quarter of the way through the first half. They managed to tie the game 22-22 with 7:36 left in the half and ended the half on top 37-28. After a strong start to the second half, the game was never close.

Butler didn’t look settled in the second half and the Saints took advantage of that. Saints Head Coach Jason Sautter said it might have had to do with this game being planned at the last second. Wednesday’s game against Neosho County was being postponed due to inclement weather. This Butler game was pushed up from Saturday to avoid a predicted snow storm and arctic temperatures. Neither team had ample time to prepare for the other.

“It just kind of seemed like they [Butler] were going through the motions. I think they ran good stuff, I think they have good players, I just don’t think they were ready to play,” Sautter said. “I think it was just a matter of a blinded situation.”

One of the players that played an integral part in last night’s victory was forward Cooper. He led the team in points scored with 21. He made over half of the field goals he attempted and 40% of his three-point attempts. The forward from Little Rock, Arkansas grabbed 6 rebounds and dished out three assists. Sophomores Samuel Henderson and Stephen Takyi added 17 and 14 points respectively.

Penalties and turnovers also played a role in the lopsided victory. Barton had 24 turnovers on the night while Seward only recorded 13. The Saints banked off 15 points from penalties, making roughly 80% of their free throw attempts.

Sautter said he liked the talent of his 2-2 basketball team, but that they needed to put it together to win more games effectively. He emphasized the necessity to win at Seward and that it should be expected.

“They want to throw water on me after the game, like no, we’re done with that,” Coach Sautter explained. “Not because I’m mad that they do it, I’m happy for them, that’s great. Every game can’t be a championship game, that’s not okay, this is Seward, we’re supposed to win games.”

Seward’s next game is against conference opponent Cloud County, which is set for a tip off at 8 p.m. on Feb. 17 in the Green House.