Volleyball comes back from 2-0 deficit against Grizzlies to win 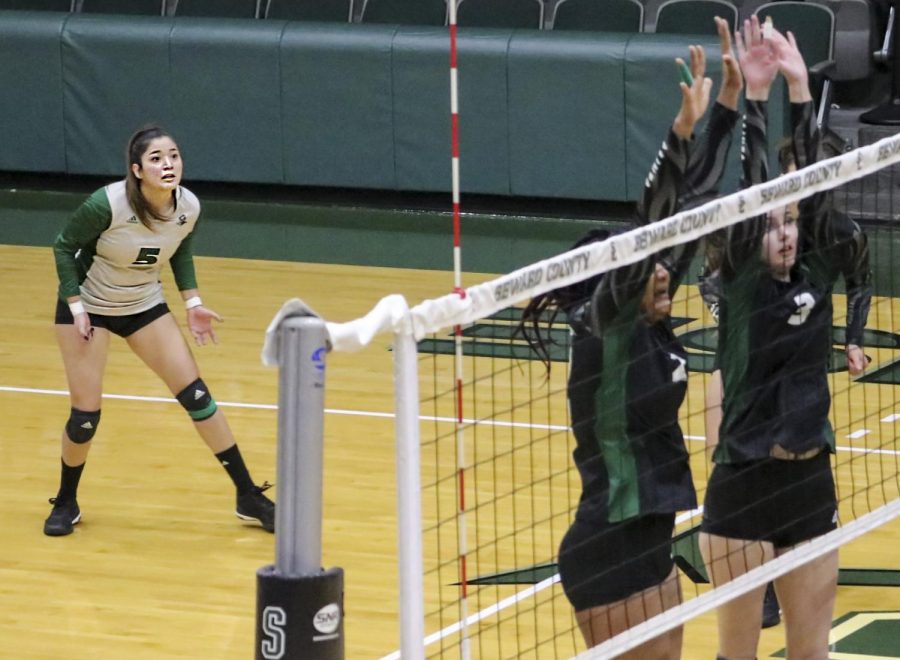 Grecia Soriano, libero from Lima, Peru, protects the court under the double block at the net. The Lady Saints were down two matches before climbing back, winning three in a row to record the win. (file photo)

The Lady Saints found themselves down two sets against Butler Community College  Monday evening and on the verge of dropping their second home game of the season. But thanks to a surge at the end of the second set and good play by Ariana Arciniega, they were able to beat the Grizzlies 3-2.

After the game, head coach Geno Frugoli pointed out the low energy the Lady Saints played with at the start of the match.

“I think part of it is that we started at an unusual time and we also haven’t played in over a week, our last match was last Monday, so I think that’s part of the ‘flatness,’” Frugoli said.

The Lady Saints still looked lost in the second set down 12-7 when coach Frugoli took a timeout. After the sideline chat, Seward came back to tie it up at 17 apiece. At the end of the second set, Arciniega hit a ball across the net barely out of reach of a Butler player sliding across the floor to try and deflect the ball. That tied things up at 24. Seward ended up losing the set, but the momentum carried over into the next three sets.

Coach Frugoli encouraged the players during the time out to stick to the game plan.

“I told them to stick to our scouting report,” Frugoli said. “We had some good things that we thought would work against them and for whatever reason they were losing confidence and not doing those things.”

The Lady Saints didn’t have much trouble handling the Grizzlies after the close second set. Part of that was due to the play of Arciniega who contributed 22 kills during the match on her birthday.

“She is a student of the game. She watches a lot of film with me…she’s my work study so she helps me with scouting reports and stuff so if anybody knows the team it’s Ana (Arciniega),” Frugoli said.

“We’re a little unusual, because usually the second coach on the court is the setter, but Ileim [Terrero] is still learning and so we need someone else to kind of step up,” Frugoli added. “I think Ana is that person.”

The starting setter at the beginning of the year, Yunju Lee, was sidelined with a leg injury which meant Terrero took her place. Due to her inexperience and just being thrown in, Arciniega filled that role of on-court commander.

With the win, the Lady Saints improve to 15-4 on the season and 10-1 in conference play.

The volleyball team’s next game is at Hutchinson where they will look to avenge a loss suffered a few weeks prior. The game is set to start at 6:30 p.m. on Thursday.