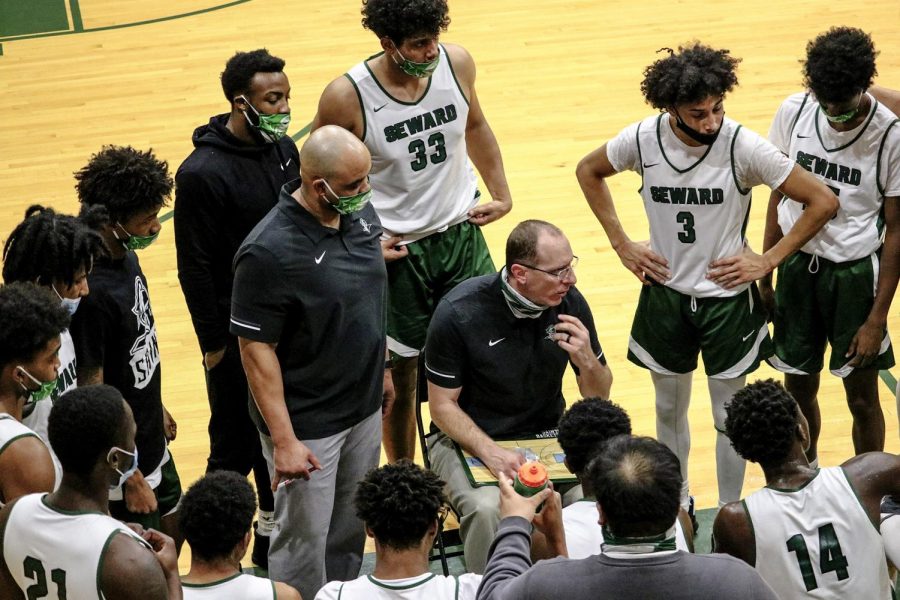 Jason Sautter, head men's basketball coach, draws out a play during a timeout. The coach and entire team was recently suspended for three-games by the college after an altercation against Dodge City Community College's team. They will not play tonight's regularly scheduled game. You may catch them back on the court Wednesday in Garden City.

The suspension comes after an altercation that took place during spring break between Seward County and Dodge City after an intense game. The March 17 matchup resulted in a double overtime loss by one point, 95-94, for the Saints.

“After conducting [an] investigation, we decided it was best to hand down the three game suspension,” Kenny Hernandez, assistant athletic director of communications, said. “For us to move forward, we have to make sure that the conference and other people know as well that we take full responsibility.”

Early on in last Wednesday’s game, both teams exchanged trash talk. With 1:36 left in the first half, Seward’s Ahamadou Sillah got the first technical foul of the night. It was soon followed by Dodge City’s Michael Marsh getting a technical, tool. This led to a total of six technicals, four called on the Saints and two on the Conqs.

Although it’s unclear what was being said, the game ended with some words being exchanged between Dodge City head coach Jake Williams and Seward County head coach Jason Sautter. Williams could be seen seemingly pointing at the scoreboard as he walked off the court which caused Sautter to follow him. Soon after, the Saints basketball team followed. The Dodge City women’s basketball team started trying to get on the court but was held back by SCCC administration. From eyewitnesses and video, it appeared to be mostly some shoving.

Here is the Seward County stream from before Sautter went to the Dodge City locker room. pic.twitter.com/8FOt17f3FX

Twitter and Snapchat went wild after the Dodge City game with video of the incident.

The Dodge City women’s basketball team was suspended for one game on Saturday against Garden City Community College after the altercation.

When asked about the way Sautter responded to the actions of Williams, SCCC President Brad Bennett condemned the way it was handled.

“Nope, we cannot respond and act in that matter,” Bennett said.

The suspension was handed down by the college in preparation for the sanctions the NJCAA might give.

“We are anticipating a suspension from the NJCAA,” Bennett said, “We were just getting ahead of it.”

At this time, the NJCAA has yet to take any action against the men’s basketball team.

Crusader News reached out to Sautter for comment, but he did not respond.

Forfeiting the three games brings the Saints record to 5-8. They will take the court again on Wednesday at 7:30 p.m. in Garden City.