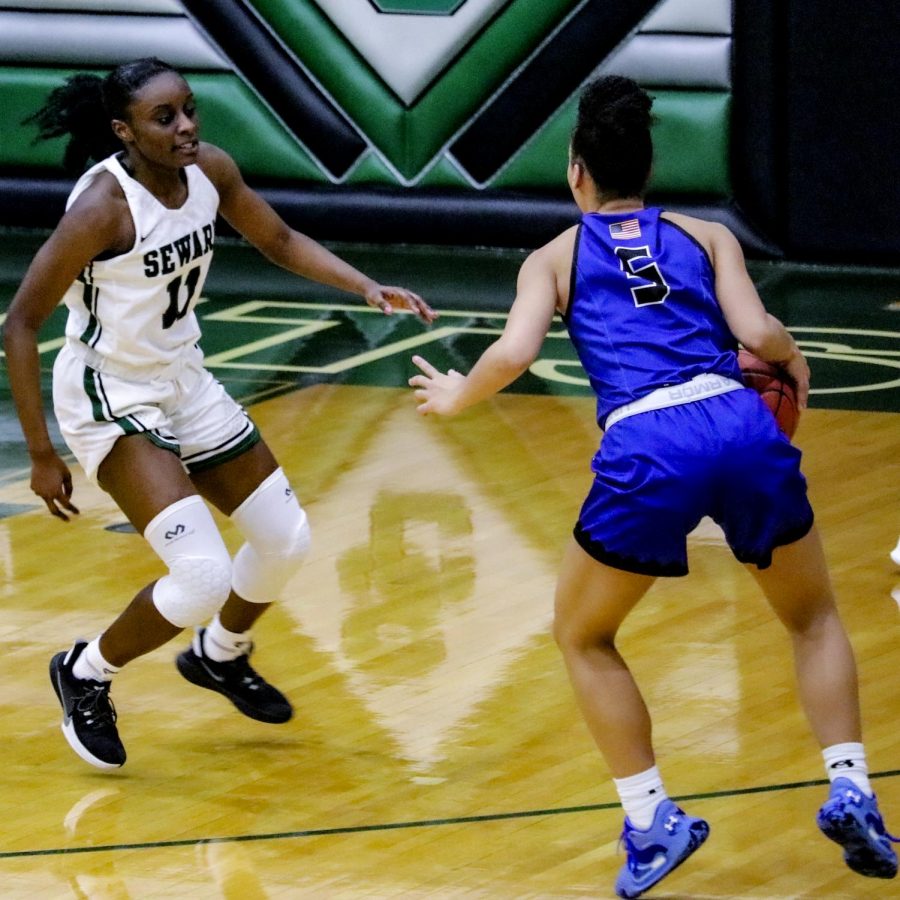 Madina Camara a freshman from Maputo, Mozambique defends the basket from Pratt. Camara made a total of seven points for the Lady Saints during the game. The Lady Saints will be going to the first round of the playoffs on April 5.

A
two-point shot by Sierra Morrow early in the first quarter of Wednesday’s game against the Pratt Beavers started a 13-point run that gave the Lady Saints an 18-2 lead to start the game. The Lady Saints continued their dominance in a 89-50 win over Pratt Community College as they gear up for a postseason run

One factor that played a vital role in Seward’s dominance was the 36 turnovers by Pratt compared to the 17 by Seward. Miyah Dubose had 11 steals along with 11 points, 5 assists and 5 rebounds

“I think it’s my quickness and being in the right spot at all times…and just knowing where the ball is,” Dubose said about her steals and dominance SCCC showed on the defensive end.

The Lady Saints jumped to an early lead in the first half only allowing Pratt to score 3 points in the first quarter. Everything seemed to click for the Lady Saints as they kept up their play on defense all game long. SCCC’s head coach Todd Ciochetto couldn’t be happier about the way his team defended.

“I knew what we had. I didn’t know when we would get there and it’s there, that defense in the first quarter was phenomenal,” Ciochetto, said. “We were in the right spots, our press was working, we really gave up 2 points…and to do that is huge.”.

Ciochetto commented on the two points given up in the first quarter.  The points came after a foul that he believed was mistakenly called on Seward and resulted in free throws for Pratt.  Holding the Beavers to no field goals in the opening minutes boosted SCCC to where the game was never really in reach. The Lady  Saints cruised to victory.

Other game leaders include Sierra Morrow who had 17 points, 6 rebounds and 2 assists. Zhane Thompson had 18 points, 2 rebounds and 1 assist.

The Lady Saints finished the regular season 16-5 heading into the first round of the Region VI playoffs. The win gives them some momentum as they will host Neosho County Community College on Monday night at 6 p.m. in the Green House.