Male, female students compare who has the most 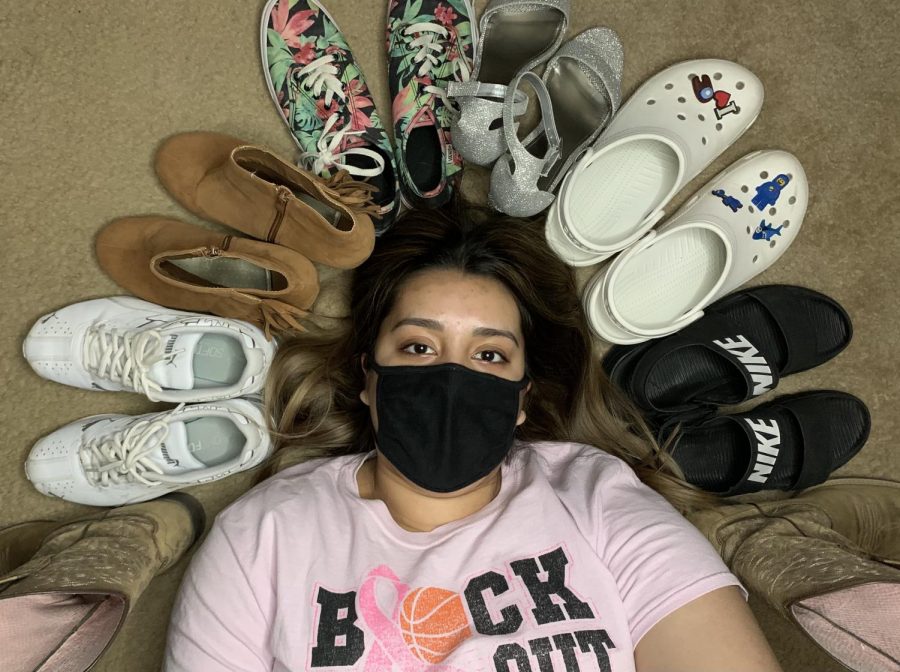 The Crusader crew decided to interview Seward County Community College students about shoes. They interviewed about 86 participants all around the college campus to get a wide variety of answers.

Have you ever questioned who has more shoes, girls or boys? Or which shoes are the most used or most popular? Crusader News surveyed students at Seward County Community College to find out the answers.

They interviewed about 86 people at Seward County Community College. About 59 girls and 27 boys.

Out of those people four of them were questioned further. Two girls, Destiny Vasquez and Litzy Aquino, and two boys, Jose Tafoya and Roque Reveles.

The interviewees were asked a series of questions: “How many pairs of shoes do you have?, Which shoes are your most used pair? Do you have multiple pairs of shoes that are the same? Favorite go-to color for shoes?, and Do you think that your major has a connection to what type of shoe you wear?”

From the four people interviewed the boys had the most shoes.

“I own about twelve pairs of shoes, and I have two pairs of Nike Air Forces.” Reveles reveals the number of shoes that he has in his closet “My go-to shoes are my Vans.”

“Honestly I think that boys own more shoes than girls these days,” Vasquez, a Business Administration major “Just from all these articles that I have read about how men and boys tend to spend more on shoes so I would think that they would own more shoes.”   This is interesting because from the overall survey girls had the most shoes.

Those interviewed were also asked what they thought were the shoes that were trending. Most of the responses gave that Nike Air Forces were the ones that they thought were the most trendy.  Although there have been lots of people walking around wearing crocs, they are surprisingly not the most trendy, or at least not to the 87 students interviewed. The most “trendy” shoes were just plain old tennis shoes.

The color that most people are more likely to go for is black. ” I feel that black just goes with practically everything” Vasquez comments on what color of shoes she likes to get. The second popular color was white. “My favorite color to get my shoes in is white” Aquino, nursing major, tells us that the majority of her shoes are either white or grey.

The majority of the people said that they did think that their major had a lot to do with what shoes they were wearing. Some said that it was for the commodity, for the comfort, or for the type of job they were pursuing.

When Jose was asked if the type of shoes he wears has to do with his major he said, “I think that my major does have something to do with the type of shoes I wear because what I have to do for my job shadowing depends on what shoes I have to wear. For example, if there’s a C-section that we have to do I wear my crocs, and if it’s just any other day I usually wear my maroon pumas.”

Throughout the survey, people gave their opinion on why they think that the type of shoe they wear has a connection to their major. While there were some people that didn’t think it had a connection, most of them did.

Even though the crusader crew interviewed a lot of people, it doesn’t justify everyone’s fashion on shoes at Seward County Community College. Although it does give the people some insight into the trends. Overall, it was fun getting to see who really had the most shoes, girls or boys.