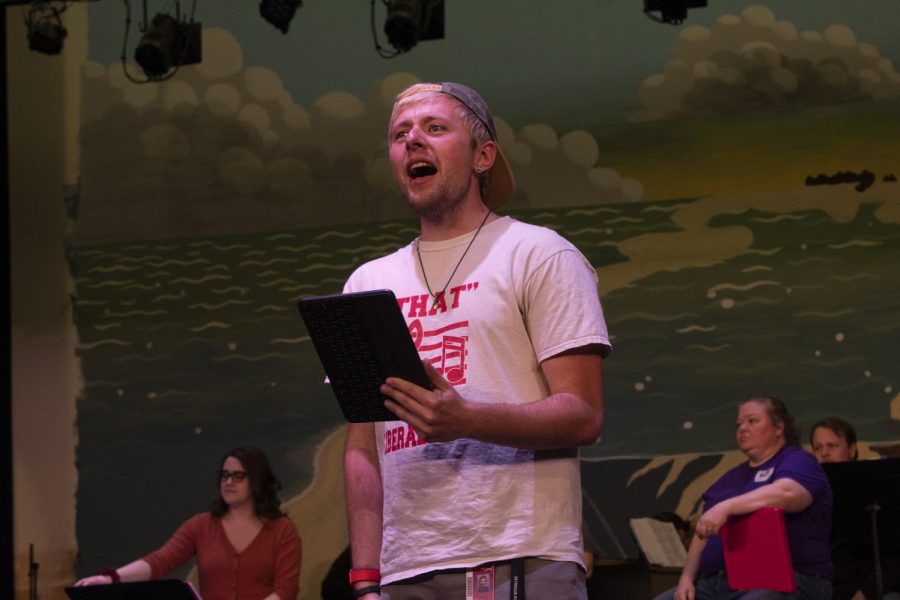 Students and community members are putting on the first performance in the college’s theater since the Fall of 2019. The performance will be laid back with singers performing some of their favorite songs from Broadway musicals.

T
he Showcase Theater opened its doors for the first time in a year after COVID lockdowns. Now the doors are open once more, though the seats may be limited to 45 people. Fortunately, there is now the option to view it online, but if you have the chance to go and be part of the 45 you should definitely take that chance.

The theater was sectioned off as per social distancing rules, but aside from that, you are still able to be part of the experience that was taking place.  The first act was full of entertainment and surprises. Slade Frisby sang with such sad emotion that it could be felt and understood.

My feet were tapping in excitement when I heard that a Hamilton song was going to be sung and seeing it being awesomely done by the female singers was great. I had only heard the song on Spotify, and when the musical was released on Disney+ for a brief time. I ended up laughing a bit when Timothy Smith came out and sang “Luck Be A Lady Tonight” from Guys and Dolls, only because my high school performed this play and the entire football team sang this song and did some type of dance number to it that I thought Is this guy going to do a dance number all by himself?  But Smith did not, instead, he brought out a different side of the song and made it more entertaining than the boys from my high school and Smith also gets bonus points since I was able to clearly understand the lyrics unlike when the football team sang it back in high school.

I was moved to tears when Stephanie Drymalski sang “ She Used To Be Mine” from Waitress. To say that I got chills from that performance would be an understatement, the performance was incredible. The emotion that Drymalski just belted out had me unable to look away. The way that she made you feel the yearning and hopelessness that the character is feeling in this song, is one of the reasons that makes me say that Drymalski’s performance was one of the highlights of act one.

After Drymalski, Sarah Estes came on stage singing “Vanilla Ice Cream”. I thought this song was going to be a bit strange and maybe not that ear-catching to me because of the title, but I was wrong. Perhaps I should not judge a song based on its title. Overall, Estes was amazing, the way that she was comical and yet was able to sing beautifully, was just another perk of the Broadway Revue.

Act two began after a short intermission and started off wonderfully with an over-the-top performance from Maddie Sander singing, “Diva’s Lament (whatever happened to my part?)”, from Monty Python Spamalot. If you have ever envisioned Broadway musicals being something for over-the-top people who just love drama and being melodramatic, then this song was the embodiment of that vision. With Sander doing the uttermost, it was the perfect amount of flair and broadway sprinkled throughout the entire performance. It had me laughing a bit and smiling (of course all under my mask, so the performers could not see it, but it’s the thought that counts) The next performances were a trio and duet which were really good, all the voices were beautiful, and they all blended really well together.

Then the Revue progressed and brought out Trina Fosdick, who gave an amazing take on “The Winner Takes It All” from Mamma Mia. I was so unsure if Fosdick had forgotten the lyrics of the song, or if that was the effect that they were going for. Regardless of that, it fits well with the emotion of the song and how the character felt. You could see it and feel it through Fosdick’s singing. It was just a powerful way of showing the characters heartbreak and to say the least I was very happy with the performance. Slade Frisby came back and gave us another performance this time singing “Waving Through A Window”. Now I have heard this song beforehand as my friends love the musical “Dear Evan Hansen”, and I was in fact really excited to hear Frisby’s take on this emotional song. I was a bit sad in the beginning because Frisby seemed to have lost his voice. He seemed to be struggling to sound loud enough to be heard over the band but I was so glad towards the end because Frisby found his step again and was able to show us what he could do.

Logan Scruggs then gave us some jazz experiences with two songs from “Chicago”. Scruggs showed off his vocal ability which perfectly fit the jazziness of the songs. Next was one of my favorite duets of the night. Stephanie Drymalski and Caleb Linkous put on a very amusing take of “Therapy” from “Tik Tik Boom!” These two had such fun chemistry together that I could not take my eyes away and I ended up laughing way too much.

The way that they were able to keep up with the band, going really fast and then going back to slow, added to the effect of two people arguing and trying to not go over too much in the argument.  What, in my opinion, was the creme on top was the fact that the two singers just got into the singing and brought out the characters to life through just a little short song.

“Hadestown” also got to be part of the Revue, with Jessica Malin singing “All I’ve Ever Known”. Malin’s voice was so stable and clear throughout the entire song that it blew me away. The way she was able to express the emotion of how the character felt love for the person that they were singing to. This song was really sweet. The way that Malin sang was just perfect for it.

When I said the “Tik Tik Boom!” duet was my favorite, I might have lied. That’s because Magda Silva and Timothy Smith’s rendition of “What Is This Feeling?” from “Wicked” was epic! The way that those two played their part together was just surprising. I did not think that both of their voices would fit together since Silva has a high voice, and Smith had sung earlier with a low almost bass-like voice. Regardless of the contrast, it worked like butter on bread. I liked the way that they were both in character expressing the “ loathing” they had for each other was just great.

The night started to end with a quartet singing another song from “Hadestown” called “When The Chips Are Down” which just reinstated to the audience that the female singers could really harmonize together and get the audience to pay attention even if the Revue was almost to its end.

Then to a shock (well a shock to me), Silva sang a song, and I mean I have her as my music appreciation teacher, and at times we get to hear her sing, but not that long, and not the way that it was expressed during the Revue. It was not till her solo performance that I was finally able to fully hear her sing, and it was so nice. I was fully taken aback by the sheer fact of how high she went that I could not look away.

But the night was not yet done, they decided that the audience was going home shocked, and that’s what they had set their goal to be.

Timothy Smith ends the night singing in a way that left me wondering how someone’s voice could do that. Smith had already shown us that he had a powerful voice, but we were not shown the sheer magnitude of it until the end of the show, and the way that he gets into it adds to the whole effect.

Overall the Broadway Revue was a really pleasant experience and I would honestly go again. I was given a lot of emotions from the performance. It was nice to be able to go and enjoy something in person again, even if there were still social distancing rules in place, it was still worth the hassle to feel a semblance of normalcy again.

The Broadway Revue will run from tonight all the way through Saturday. They will start each night at 7 pm. There is a 45 person limit, so get your tickets at the Humanities Building from Terri Barnes at the front desk, and if you can’t come in, you can always tune in on Facebook Live.