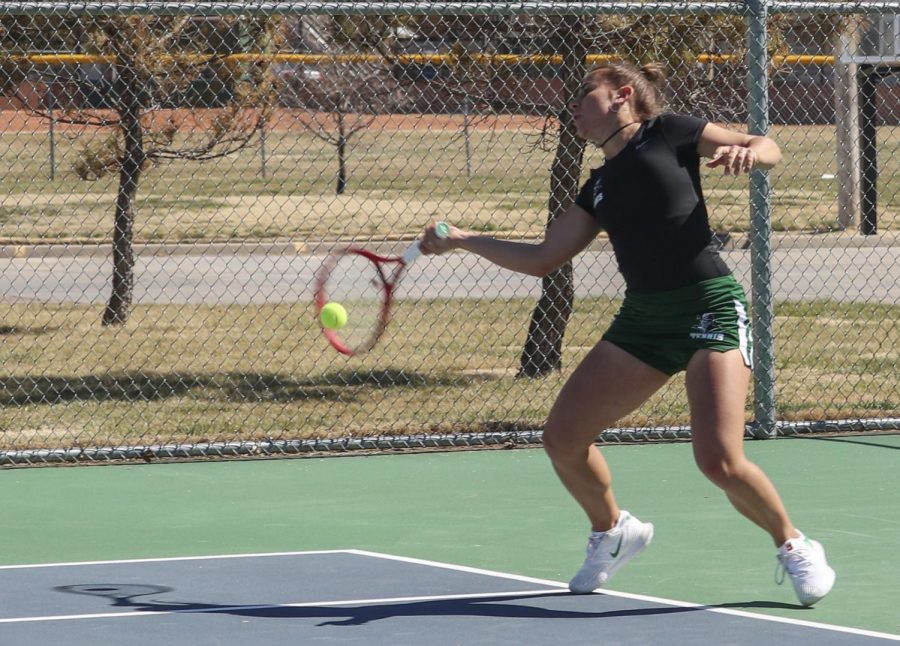 The Lady Saints Tennis team will be playing at at the Mesa Tennis Center at Gene Autry Park in Mesa, Arizona for Nationals. The Saints will have six student-athletes in the singles draws and three teams in the doubles draw.

Lady Saints are now tied for fourth palace with 26 points. At the 2021 NJCAA National Tournament at Mesa, Arizona. The Lady Saints have 6 athletics in the singles draw and three teams in the doubles draw.

Here’s how the teams make points. Each individual will compete for points that will get added to their team’s total. A first-round victory is worth two points for their team and every win after that will be one point additionally for the team’s overall total.

if an individual loses their first-round game they will be placed into the consolation bracket and every win in that bracket will be only .5 points for their team. If the individual wins their first but loses in the next round they will, unfortunately, be eliminated from the tournament.

Lucia Popluhorova, Chiara Matteodo, and Justine Lespes each have fallen in the quarterfinals. Lespes was able to to take a win from Cowley before going down.

The second day of the competition ended with  Lespes and Matteodo winning three straight sets, but were not the only ones with a win to celebrate.  Popluhorova and Maria Garcia took three sets against State College of Florida Manatee-Sarasota for doubles.  Lespes also won a singles match from Eastern Arizona College after losing the second set.

WTN: Final
Justine Lespes comes from behind in the third set to win the match! Set scores 6-4, 4-6, 6-4 and will play in the quarterfinals tomorrow at 7:30 AM. #SCCCSaints #GoodToBeGreen pic.twitter.com/Hg3fhwSHdM

Day one of nationals concluded with a win in the No. 1 doubles draw from Lespes and Matteodo over Hartford Community College. Vogelzang also won her first round match of the tournament.

But Popluharova gave the Lady Saints a winning start after taking down Iowa Central in the first round of the No.2 draw of the singles match.

For the complete brackets on the tournament follow the link below or check out @SewardSaints for daily updates or go to 2021 NJCAA Women’s Brackets.